Twenty people once on death row, who were found innocent and released, stood together at the state capitol Friday, hoping to abolish the death penalty. 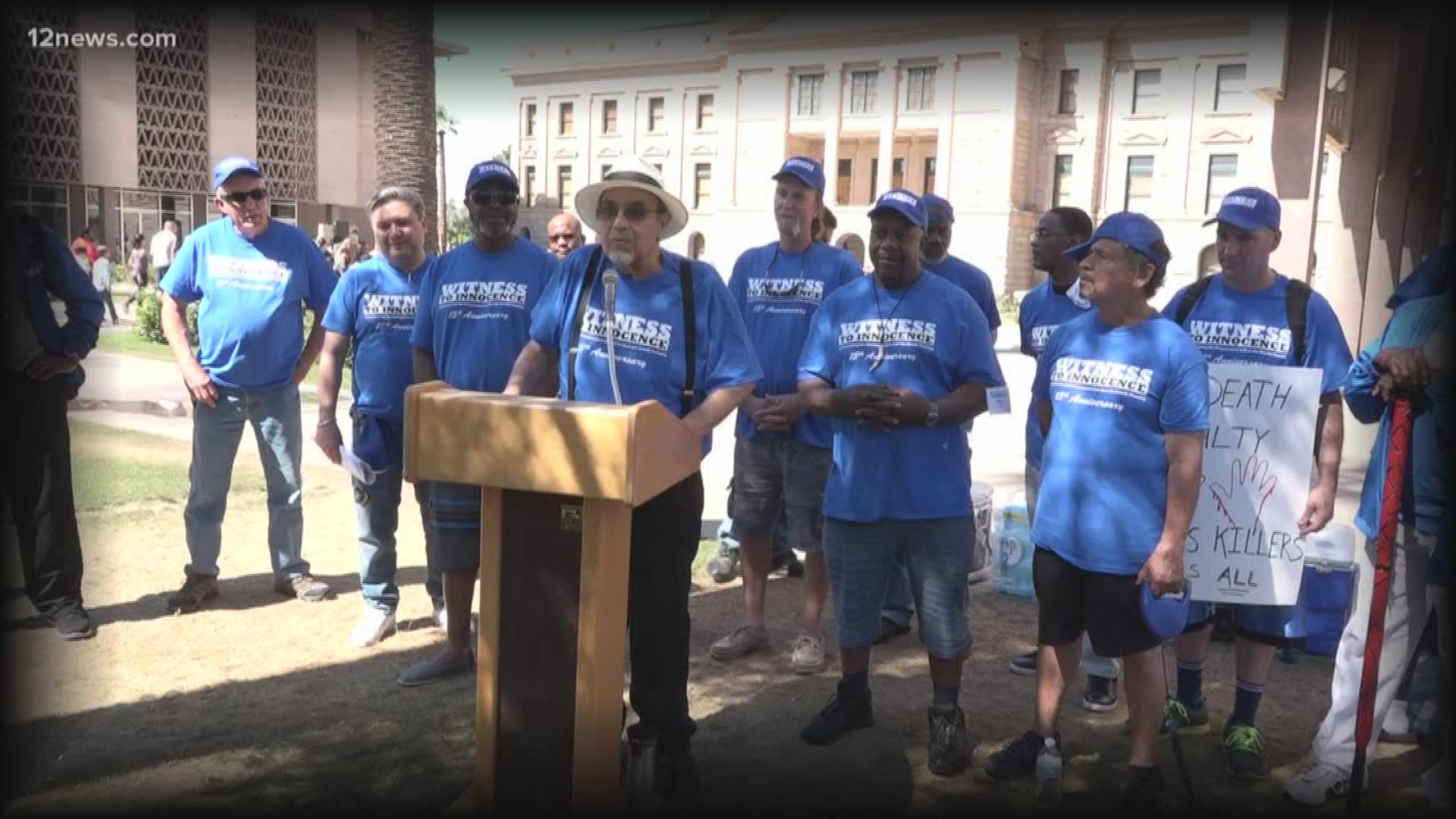 PHOENIX - Over 20 death row exonerees were in Phoenix Friday for the Witness to Innocence Annual Gathering.

“Who are we? WITNESS TO INNOCENCE. What do we want? JUSTICE. When do we want it? NOW," chanted the small crowd at the state capitol.

Since 1973, 162 people on death row have been found innocent and released. Twenty of them stood together today, hoping to change the system.

“Hopefully today is the day that we leave here and say, capital punishment is no more," said Kwame Ajamu, chairman of the board for Witness To Innocence.

Some shared their stories.

“I spent three years on death row, innocent, and I received a lot of support -- close to 400 letters a week," said Joaquin Jose Martinez, acquitted of murder on June 6, 2001.

“We see it all the time in baseball games. A man slides into second base, he’s out. Upon further review, he’s safe. You execute a man that didn’t do the crime, there’s no coming back," said Natchson Fields, acquitted of murder in 2009.

Also on hand was the 100th inmate exonerated from death row, Ray Krone.

“The state called me a monster, called me the snaggletooth killer. In 1992 I was convicted of a murder based on a bite mark and sentenced to death. I had never been in trouble, six years active duty in the Air Force, seven years at the post office, and I was the monster they were gonna kill," said Krone.

Now, Krone is the co-founder of Witness To Innocence, which aims to abolish the death penalty.

“I’ll tell you the prosecution may rest but we can’t, we’ve been there, we’ve done that, we are here, we are going to do this," chanted Krone.

The daughter of exoneree Delbert Tibbs shared her thoughts as well.

“I know that people make mistakes regularly, and that’s an OK thing in general, until someone’s life is on the line, and then it becomes inexcusable," said Mahalia Abeo Tibbs.

Religious leaders were also on hand.

“You must rescue those taken off to death. We know we have to be tough on crime, but it has to be done in a way that is effective and just and this is not just," said Rabbi Dr. Shmuly Yanklowitz.

According to a recent Gallup report, a nationwide survey of 1,028 adults polled, 55 percent said they are in favor of the death penalty for a person convicted of murder. That is down from 60 percent in 2016, and support is in a steady decline.

The exonerees will also be at Franciscan Renewal Center in Scottsdale for a Q & A session.