'David vs. Goliath' showdown set between customers and APS

On Sept. 25, a group of skeptical customers will have the opportunity to make their case against APS in a rare hearing overseen by an administrative law judge. 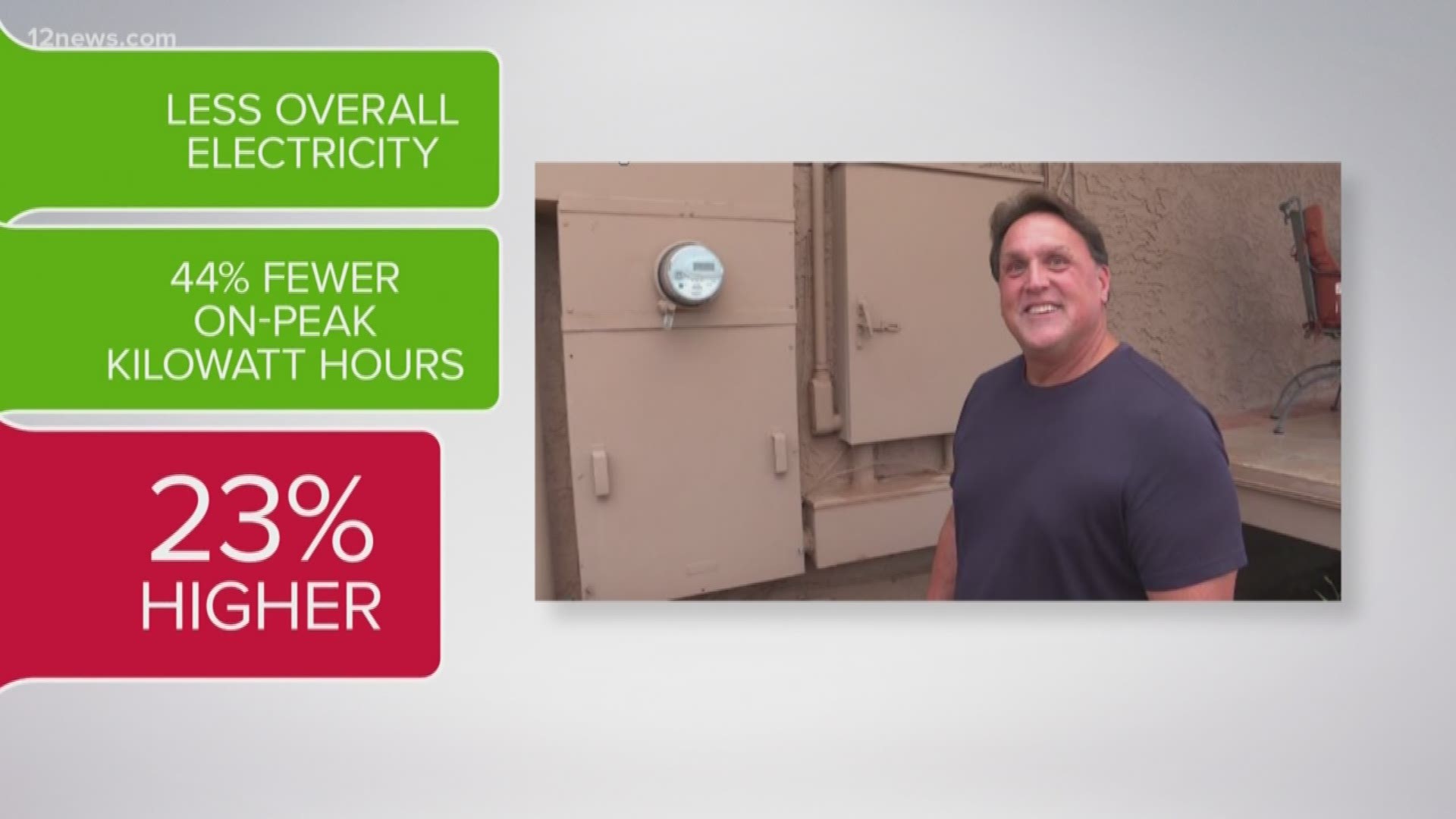 PHOENIX — Last March, north Phoenix homeowner Steve Huscher proactively switched to an APS usage plan that the company advised would save him the most money, given his electricity-usage history.

But Huscher’s bills, relative to his power usage, have been significantly higher this summer compared to last.

He points to the month of June as an example. According to a breakdown of his bill, his family used 44 percent fewer on-peak kilowatt hours and fewer overall kilowatt hours compared to June of 2017. Yet Huscher’s bill this year is 23 percent higher at $434.

APS confirmed to 12 News that, “Huscher proactively switched to the plan that was recommended for him back in March” and that “while he uses much more energy than the average customer, the increase he has experienced is in line with the annualized average month bill impact that was approved.”

The APS rate plan approved last year by the Arizona Corporation Commission includes new time-of-use options for customers and more expensive rates during on-peak hours. APS told the commission the typical residential customer would see their bill rise 4.5 percent or about $6 per month.

But in Huscher’s case, his June bill of a 23 percent rate hike reflects the best deal possible for the amount of electricity he uses at the times of day he uses it.

“What choice do I have?” Huscher said. “I can’t switch to another provider like I can my cell phone. APS is a monopoly and taking advantage of the people of Arizona.”

APS says that Huscher's actual bills over the course of the most recent year (September 2017 through August 2018) compared to the previous year (September 2016 through August 2017) reflect an overall average increase of 4.91%. In other words, a spokesperson for APS says one month doesn't reflect the whole picture and Huscher's "annualized monthly average bill" for the most recent year is close to the 4.5% projected increase for the average customer. Huscher has averaged 81 kWh less per month in the most previous year, the spokesperson told 12 News.

Huscher says he believes comparing one month in 2018 to the same month in the previous year is an "apples to apples" comparison and said he has made it a point to use fewer on-peak hours this year. Therefore, he said he believes he should be saving money, not spending more.

"I'm doing a better job saving in cooler months and I wasn't using using as much power during on-peak," Huscher said, referring to the most recent year. Huscher's overall "on-peak" power usage for the two most recent years was not available.

It’s not the first time someone has accused APS of scamming them. Accusations of fleecing seem to come with the territory of utility companies that are essentially monopolies regulated by government agencies.

APS maintains it is abiding by its agreement made during last year's hearing. APS has provided testimony of a regulatory affairs manager who stated by her estimates, 40 percent of customers should have seen a rate increase of less than 1.3 percent, including a decrease in some cases. 32 percent of customers would have seen an increase of 10.8 percent or more, according to her testimony.

On Sept. 25, a group of customers will have the opportunity to make their case that the rate hike is worse than advertised in a rare hearing overseen by an administrative law judge.

The complaint, filed by Phoenix public relations business owner and activist Stacey Champion and co-signed by 400 Arizona residents, alleges, “the actual average bill impact experienced by residential customers under the rates approved ... is significantly greater than the 4.5 percent projection.”

“I believe this is a ‘David vs. corporate Goliath’ hearing,” Champion said.

During the Sept. 25 hearing, a judge will review testimony provided by Champion’s attorney and attorneys for APS. Expert witnesses from both sides are also expected to testify. The Corporation Commission would ultimately vote on whether to hold a rate rehearing.

According to a July 31 court filing, an attorney for Champion submitted expert testimony that concludes customer bills increased an average of 11 percent, or $16.59, compared to the “baseline year” in 2015.

“The billing process is super-complex by design,” Champion said. “And the bottom line is when APS spun out all of their press releases they told people it would be an average of six dollars a month on their bill, period. And thousands of people who I’ve heard from are not seeing that.”

Don Brandt, the CEO of APS and its parent corporation, Pinnacle West, declined an interview request by 12 News to discuss his company’s practices. He has led APS for nearly a decade.

A spokeswoman for APS wrote in an email to 12 News that last year’s rate review was an open, transparent process that resulted in an agreement of 29 diverse parties, including advocates for limited-income customers.

“We stand by the integrity of that process and how we have implemented the approved rate changes,” APS Communication Consultant Jill Hanks wrote in a statement. “These include new APS service plans with more options to help customers manage their energy use and costs, more funding for bill assistance programs and important investments in the electric grid that serves our customers.”

Commissioner Bob Burns, the only commissioner to vote against last year’s rate hike and a frequent critic of APS, said there will be many factors involved in the hearing.

“How compelling will the argument be that Champion makes? What will the opinion of the administrative law judge be based on that information? And there’s always the politics involved,” Burns said.

Hanks contends that Champion herself stands to save “more than 3 percent per year” without making changes to how she uses electricity.

“When Ms. Champion filed her complaint, we offered to consult with her, and those on her original petition we could confirm as APS customers, to clear up any misunderstandings and get them on the best plan for their needs,” Hanks wrote.

Champion alleges that Hanks’ statement does not compare her current rate with the 2015 baseline rate. Instead it compares two rates after the increase already went into effect, Champion said.

“Per our expert report, compared to the 2015 test year rates, my bill increased 9 percent to 14 percent. That’s 2-3 times higher than 4.5 percent,” Champion wrote in an email.

When 12 News asked Hanks about the fact that Huscher’s bill is 23 percent higher in June 2018 compared to June 2017, even though he used significantly fewer on-peak hours this year, Hanks said one month does not provide a full picture.

“Comparing bills over a year provides a more accurate picture than simply comparing one month out of the year,” wrote Hanks. “For example, comparing the very next month, July, this customer’s bill is 16 percent lower in 2018 than the same month last year.”

It is correct that Huscher’s July 2018 bill is 16 percent lower than July 2017. But there is a crucial detail: Huscher used nearly three times more on-peak kilowatt hours and more overall electricity in July 2017 compared to July 2018.