Four boys under the age of 15 were victims of assault as part of hazing on the Hamilton High School football team, according to court documents. 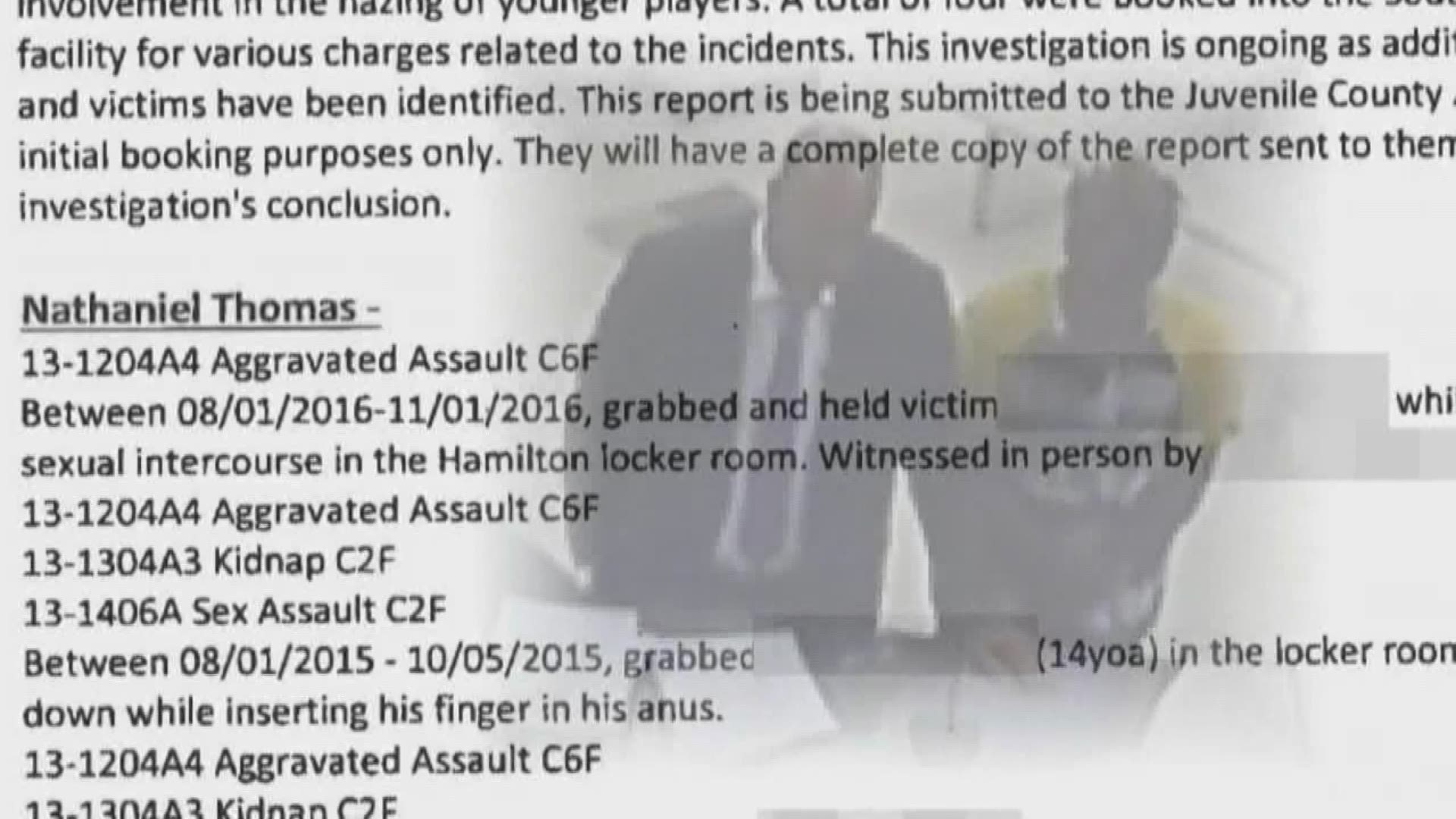 This story was originally published March 31, 2017.

PHOENIX - A Maricopa County Superior Court judge ruled Friday that 17-year-old Nathaniel Thomas will not be released on bail because he has been charged with sexual assault.

Thomas, who has been charged as an adult, also faces multiple counts of kidnapping (3), aggravated assault (3), and molestation of a child (2), court documents say.

Court documents accuse Thomas of being the ring leader who allegedly committed most of the acts while other players watched or in some cases helped.

He is one of three members of Hamilton High School’s football team who has been charged in connection with hazing that took place on school grounds between September 2015 and January 2017.

The school was alerted to the alleged hazing by an anonymous voice mail left for the athletic director in January, court documents say. However, investigators say the call was not recorded nor was there documentation of the school's subsequent investigation.

According to court documents, when interviewed, school administrators and coaches expressed having conflicting levels of knowledge regarding the situation in the locker room.

Staff members reportedly told investigators they were hampered by the field house design in which there are no coaches' offices within visual or auditory range of the locker room.

There were at least four separate assault victims who were under the age of 15 years old, according to court paperwork. The assaults took place in the locker room, the investigation shows, as part of a tradition of initiation or hazing that took place over two seasons.

According to court paperwork, "a successful 'initiation' included penetration of the anus by fingers and objects." Thomas allegedly "simulated sexual intercourse" with two minors -- one time after removing a boy's pants -- and reportedly inserted his finger into one boy's anus, court documents said.

However in one incident, one of the charged juveniles, is accused of trying to put a cell phone in a victim's rectum through his clothes.

Investigators then alleges that same juvenile put his clothes genitals on the victim's face before spitting on him.

In addition, players took photos and videos of some of the assaults and posted them to social media, court documents stated. A number of players witnessed at least one of the incidents involving Thomas, which was also posted to Snapchat, according to the investigation.

A number of potential victims who investigators contacted did not wish to be involved or didn't identify themselves as victims, court paperwork said.

During his initial appearance Thomas' lawyer said the allegations were just that, allegations.

He went on to say Thomas adamantly denied them and was presumed innocent.

On Wednesday, six varsity football players were arrested as part of the investigation into the hazing. Four were booked into a juvenile facility. Of those, one -- Thomas -- has been charged as an adult, two have been charged as juveniles, and investigators are looking for more information involving a 15-year-old suspect.

As far as the 2 players being charged as juveniles, according to court papers, they were mostly accused of helping Thomas commit an alleged attack by holding another player down.

Thomas' next court date is a status hearing on April 6.