The problem comes down to locks in cells and that some inmates can open their cells from the inside, according to the union. 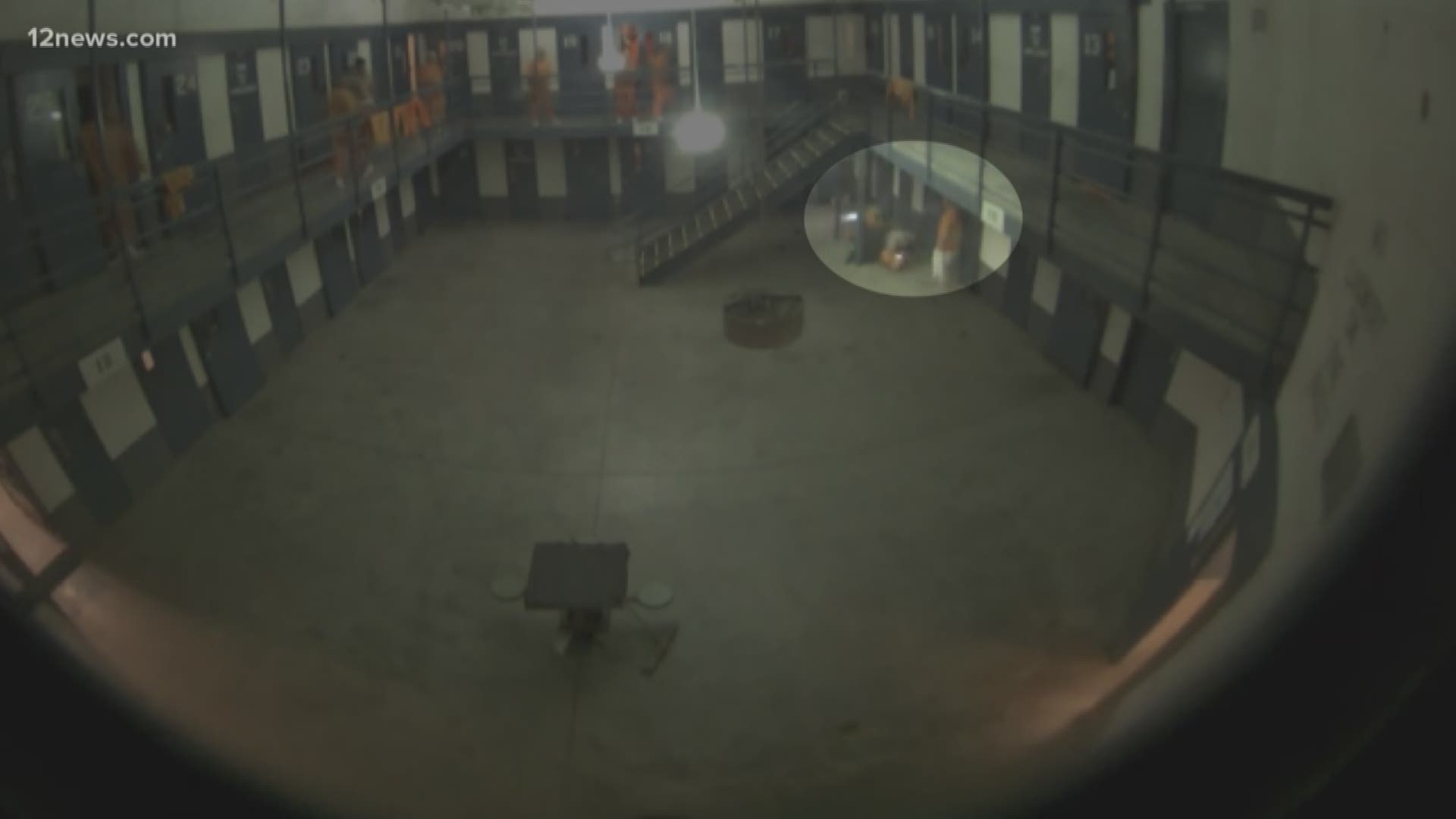 The Arizona correctional officers union and inmate advocacy groups are demanding change to what they call dangerous conditions in some of the state's prisons.

"There’s no excuse for any situation that compromises public safety at our prisons," Ducey said in an emailed statement.

Carlos Garcia with AZCPOA says one prisoner was killed and several officers have been injured because of doors that were not properly secured.

"We are absolutely under siege in the Department of Corrections," Garcia said.

Corrections officials say over the past two years, inmates housed in three close-custody units at the Lewis complex began tampering with their cell doors so they could be opened from inside, according to the Associated Press.

According to a statement from the Department of Corrections, the director was notified about the door problem in May of 2018 and took "immediate action." At first the state installed safety pins to help lock the doors, but it was unsuccessful. Inmates would steal, break or remove the pins. According to the DOC, the state started to add padlocks to doors in January. Over the weekend, the department finished installing 1,000 padlocks.

In a letter, the fire marshall said the padlocks would be an acceptable temporary solution, but they do not follow the fire code.

In what they called an unprecedented opportunity, a prisoner advocacy group joined with AZCPOA in pointing to the problems at Lewis prison.

The group had several suggestions for improvement:

On Thursday last week, the Arizona Department of Corrections addressed the concerns raised over the lock situation in Lewis prison, saying they have been working to address inmates tampering with cell doors for almost a year.

"The Arizona Department of Corrections (ADC) has implemented countermeasure strategies to thwart tampering, but inmates actively devise new ways to tamper with the doors," ADC said in a statement.

While the department continues to combat inmate tampering, ultimately it points to upgrading the system as the best way to combat the issue. 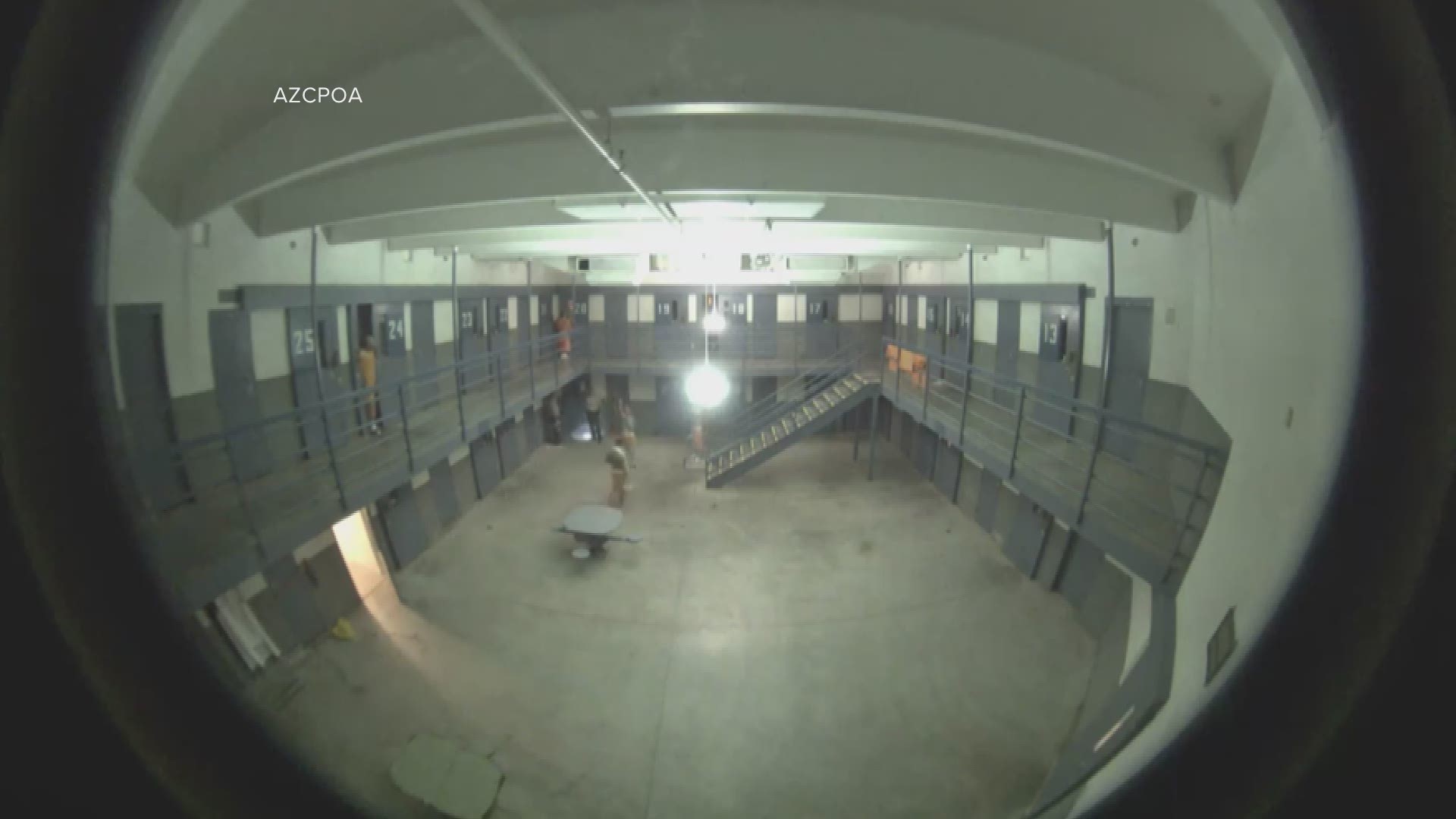 Over the past two years, inmates housed in the close-custody units at ASPC-Lewis (Morey, Buckley, and Rast) began tampering with their cell doors so they could be opened from inside. In May of 2018, Director Ryan was informed of the situation and took immediate action.

Ensuring the safety and security of our employees and inmates is always the agency’s first and highest priority. Over the two fiscal years, assaults on staff have been reduced by over 50%, and they continue to go down. That being said, the tampering that has been going on in some units remains a serious concern of the agency.

Having the ability to open their cell from inside is dangerous for both our officers and other inmates. It cannot, and is not, tolerated. Inmates must be held accountable if they engage in such tampering.

The Arizona Department of Corrections (ADC) has implemented countermeasure strategies to thwart tampering, but inmates actively devise new ways to tamper with the doors.

The cell doors in these buildings are sliding-style. Initially, inmates devised discrete methods to insert small objects in a way that allowed doors to close and show a positive lock on the control board. The object would leave just enough tolerance that an inmate could jar the door open. As a countermeasure, the Department installed external locking pins on the doors (a more robust version of something you see on a sliding window or door at home). Inmates eventually devised ways to tamper with the pins, either by breaking them, stealing them, or having other inmates already out in the pod to remove the pins.

The Department implemented a countermeasure to the tampering of pins, by introducing padlocks on some doors to ensure the door remains secure. A couple pods at each unit have padlocks on cell doors.

Any inmate that is caught tampering with a door or locking pin is rehoused in a pod that uses a padlock on the door. While pin tampering has continued, it has drastically subsided as a result of the countermeasures put in place.

ADC is evaluating further the procurement and installation of padlocks on the remaining pods in these units.

Ultimately, these additional security measures are temporary and we are in the process of planning a door retrofitting project for the Lewis prison to be funded in the Building Renewal process early next fiscal year (which begins July 1).

ADC leaders met in January with employee organizations and communicated with them about inmates tampering with cell doors. At this meeting, the Department shared its plans to begin door upgrades.

ADC has several employees that are trained and assigned to address any door or pin mechanism that has been tampered with by an inmate. Also, the Department has in place procedures to evacuate inmates from their cells in the event of a fire or other emergency and to conduct drills to ensure that staff can quickly and efficiently open cell doors in the event of an emergency.

ADC understands that until such time as the current locking system can be replaced and/or upgraded, the agency has no choice but to take steps to ensure staff, inmate and public safety.