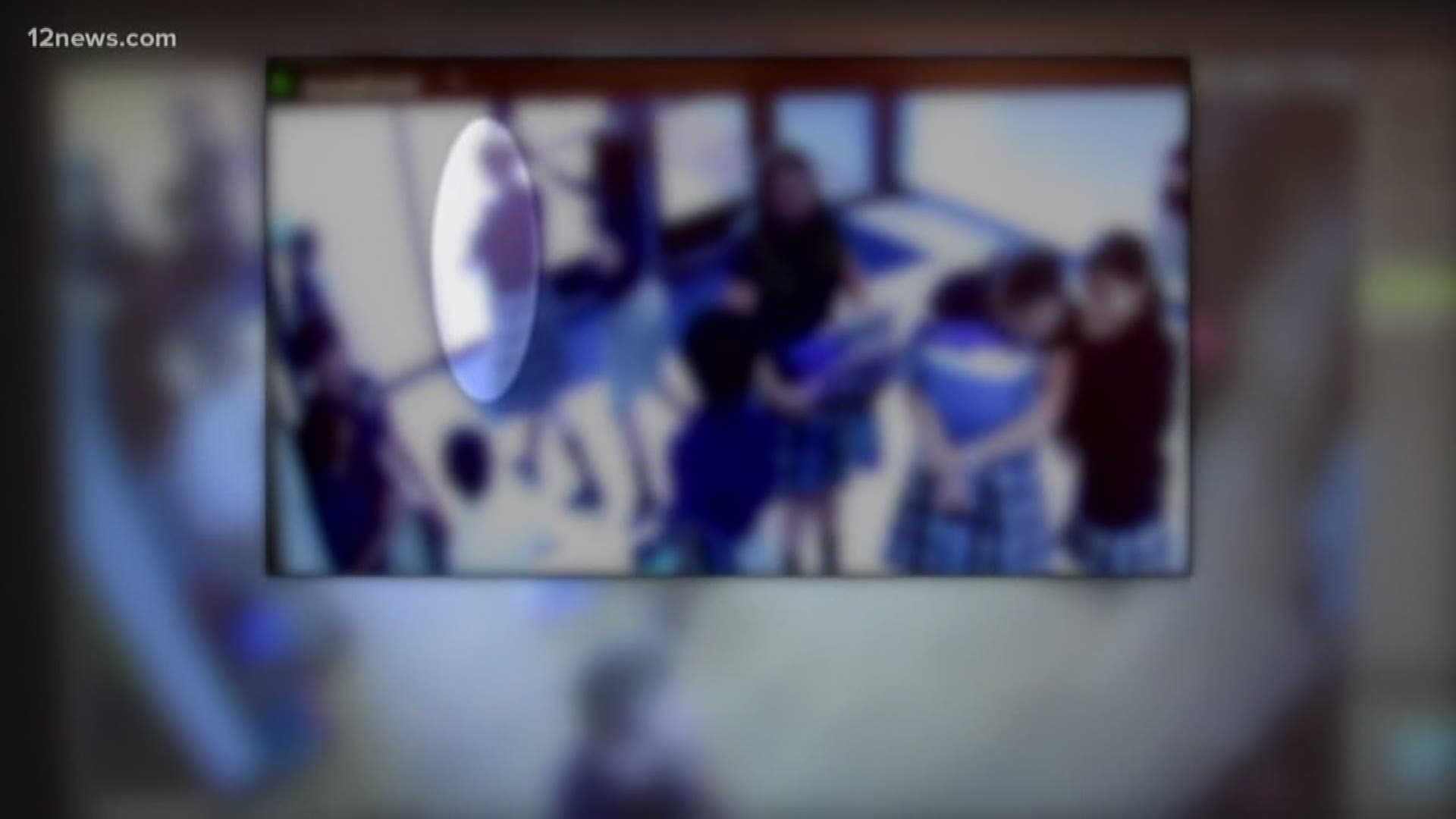 PHOENIX — The Chandler Police Department has recommended a misdemeanor assault charge be filed against two 6th-grade girls at Lincoln Preparatory Academy after they were seen bullying on camera.

The incident was captured on school surveillance video May 6th.

Chandler Police released the video to 12 News in response to a public records request. The department blurred the video to obscure the identities of the students.

It shows a girl standing during a class break with books in her hands. Two other girls seem to taunt her and swipe at her ponytail. One girl grabs the victim’s hair so hard she almost falls backwards to the ground. One of the two offending girls also tries to drag the girl by her hair outside a doorway.

“(The victim)…has a limited capacity to defend herself from multiple hair pulls and at least one swat to her face," wrote a detective in the Chandler Police report.

According to the report, the detective made several attempts to interview the two girls in the days after the attack but police were unsuccessful. The father of one of the girls told police he didn’t want his daughter to be interviewed without an attorney, and that he believed the investigation was not complete and impartial.

The school is operated by Great Hearts Academies, a network of public charter schools. A spokesperson for Great Hearts told 12 News the two girls were suspended for an undisclosed amount of time.

Mother of alleged victim not satisfied

The mother of the alleged victim tells 12 News the school didn’t handle the matter appropriately.

"I can't speak for my daughter, but what she said was, 'Why do I feel so unimportant? Why do I feel like this is my fault?’” said April Chadwick.

Chadwick said she was told by police the girls were suspended for three days. 12 News was unable to contact the parents of the girls and could not verify the amount of days the girls were punished.

Chadwick said she was hesitant to send her daughter back to the school because she couldn’t be assured school officials could keep her daughter safe.

“I got better information from police than the school,” Chadwick said.

“A week and a half after the incident, they (administration) wanted me to go into a roundtable with the parents who wouldn’t even contact the police back. I told police I’m not going in there until the parents contact police; it made me feel unsafe.”

Chadwick said she kept her daughter from returning to school for 10 days and only allowed her to return to take finals.

“Her grades suffered. Teachers wouldn’t even send us her homework,” Chadwick said.

In Chadwick’s view, the school did not seem prepared to handle an assault case on campus.

Odell told 12 News the school was cooperative with police and told Chadwick her daughter was safe to return.

“Great Hearts does not tolerate bullying or harassment of any form and takes any such accusations very seriously,” Odell said.

What if both sides aren’t satisfied after bullying incidents?

Ensuring all sides are satisfied after an incident of bullying is not easy, said Dr. Mark Joraanstad, a former principal and current executive director of Arizona School Administrators.

"It's one of the most serious challenges we face, actually,” Joraanstad said.

Joraanstad won't comment on this particular case, but he says most public school districts rely on a discipline matrix for offenders, though it’s not a strict guide because there are mitigating and aggravating circumstances that come into play.

"For example, if there's an alleged assault, an aggravating circumstance might be, 'Was the individual physically injured?' That would make the consequence more severe," Joraanstad said.

He said it’s not uncommon for parents to be concerned about the safety of their children after incidents of bullying or fighting.

“It’s very important to sit down with the families, to talk directly with them about what’s in place to make for a safe return, to be one-on-one with parents and the students,” Joraanstad said.

“And often when the student does come back to provide check-in points which are daily, or several times a day to check-in with students.”

Chadwick says she was already planning to enroll her daughter in another school next year and is considering filing a lawsuit against Great Hearts.

“They made me feel bullied, not just my daughter,” Chadwick said.

For parents who don’t want to take their child back to the same school, Arizona provides many options as a “school choice” state, Joraanstad said.

“If a setting isn't working and a student is unhappy and it can't be resolved, they do have a choice of trying another setting. That's a last resort,” he said.