Bob Costello had served as chief of Buckeye’s Fire and Medical Rescue Department since 2008. 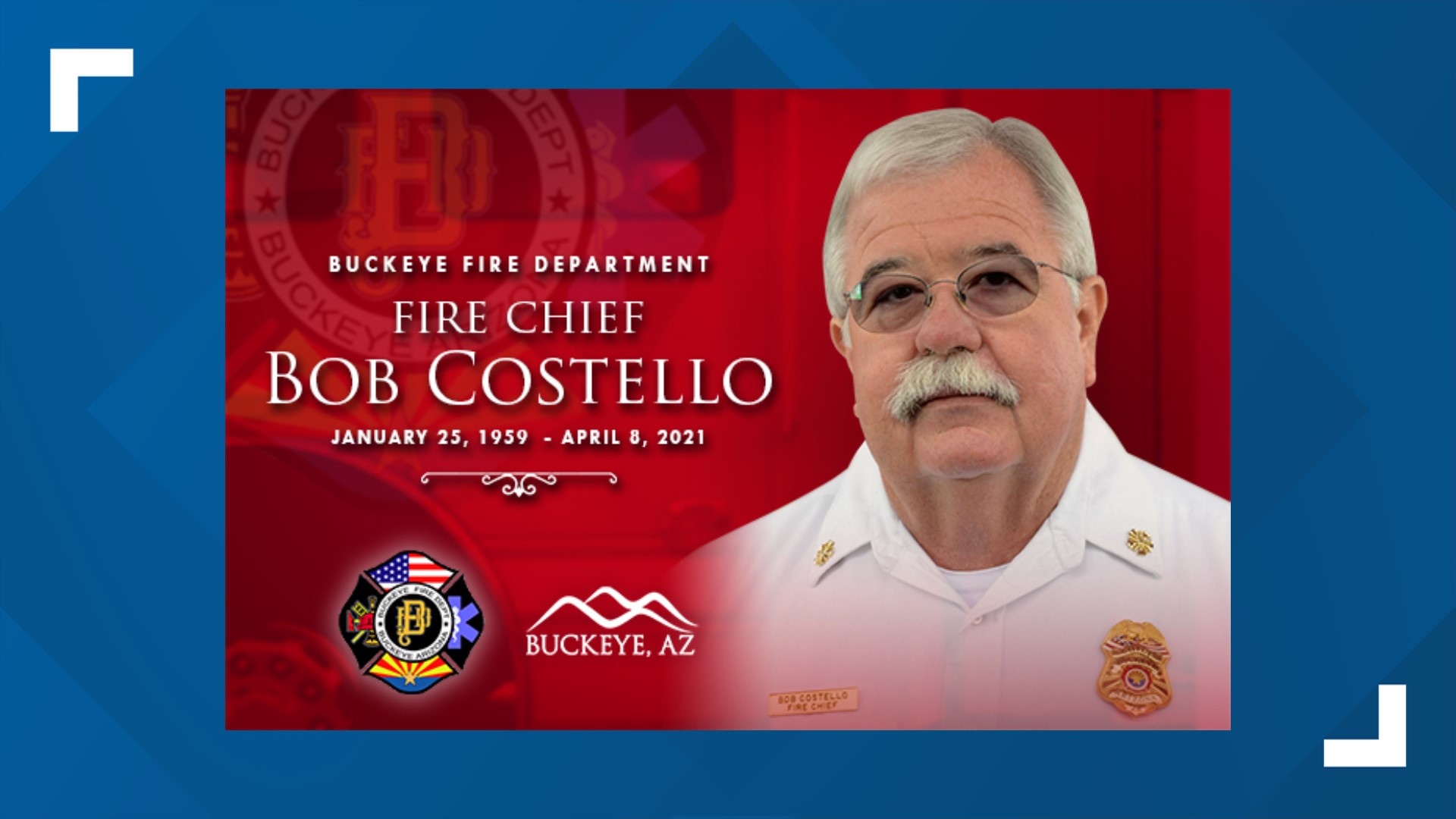 BUCKEYE, Ariz. — The city of Buckeye announced that Fire Chief Bob Costello died on Thursday from complications of COVID-19.

Costello had served as chief of Buckeye’s Fire and Medical Rescue Department since 2008.

Costello was recognized for numerous awards and innovative programs during his time as chief, including the implementation of the Community Paramedicine Program, in coordination with Banner Estrella Medical Center.

Some of Costello's other awards and achievements include:

Costello served as a member of the Patient Family Advisory Council at Banner Estrella Medical Center, was instrumental in constructing multiple fire stations for the department and under his leadership, his department took over operation and maintenance of the Louis B. Hazelton Memorial Cemetery.

The Chief had an impact both professionally and personally with his community and team. His team says he leaves a legacy that will live on in each of them.

“Just as the day he passed away, the guys had to pick up their stuff and grief and then move on and still serve the community and that is what he would have wanted," said Buckeye Fire Marshall Nate Ryan.

“I’m going to emulate that and pass it forward. Do the right thing, it’s simple,” said Robert Garza.

"The hard work and outstanding efforts of Chief Costello will have positive impacts on Buckeye for years to come. Chief Costello leaves behind a wife and brother. Our hearts are heavy as we process this sudden and unexpected loss," a statement from the city said.

“Chief Costello was a true visionary for Buckeye,” said Buckeye Mayor Eric Orsborn. “His quiet, comforting personality made him a friend to everyone he met. He was one of the most genuine people on earth and truly cared about others and the community. We are all still in shock over his sudden passing, but take comfort in knowing that his amazing contributions to Buckeye will have positive impacts on the city for years to come.”

“The entire city of Buckeye is grieving over the loss of Chief Costello,” said Buckeye City Manager Roger Klingler. “His innovation and ability to implement forward thinking programs like the Community Paramedicine and Treat and Refer programs were true assets to the city, the department and especially our residents. He will truly be missed.”