Audio: Officers warned that driver in high-speed pursuit was a 'sovereign citizen'

An officer called other officers in the pursuit to warn them that Mitchell Taebel was a sovereign citizen after he called 911 himself. 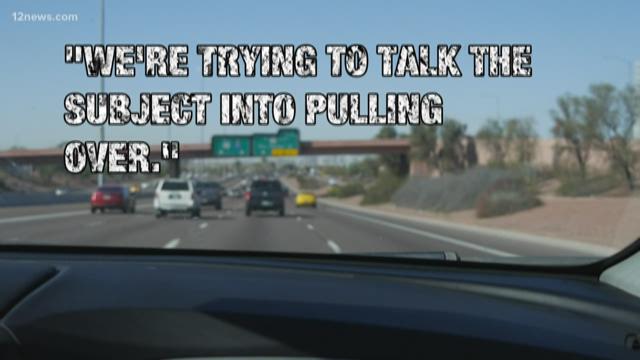 PHOENIX - Newly-released audio shows officers were warned that the suspect in last month's high-speed pursuit was a sovereign citizen.

Mitchell Taebel allegedly led police on a 40-mile chase from Goodyear to Tempe, ending in a head-on crash with another driver.

RELATED: 'How dare you endanger so many lives': Crash survivor talks about cross-Valley chase suspect

During the chase, Taebel apparently called 911. Arizona Department of Public Safety has not released that recording, but whatever was said during the call was enough for an officer to send a warning to other officers.

"For all units on this, it sounds like a sovereign citizen on the phone," the unidentified officer said.

Sovereign citizens generally do not believe the United States government is legitimate and that laws do not apply to them.

Taebel was expelled from Arizona State University for "seriously disruptive and odd behavior," per the documents. The university did not respond for comment Monday.

Those documents also show a jar of medical marijuana was found in the crash debris, leading investigators to suspect Taebel had been under the influence.