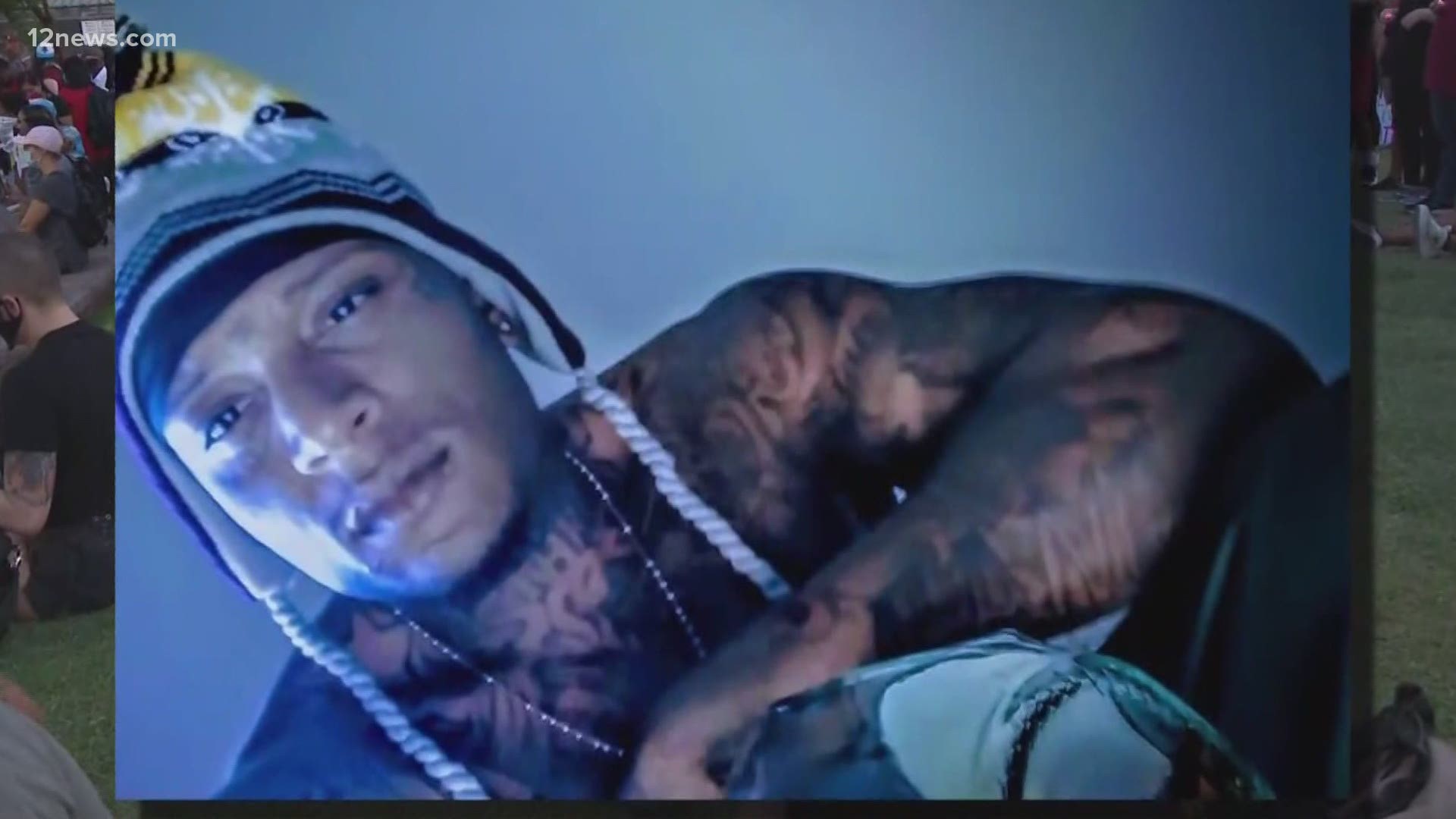 PHOENIX — Editor's note: Watch the live press conference in the player above

The attorney for the family of Dion Johnson held a press conference Wednesday where they played audio from police radios during the traffic stop where Johnson was killed by a DPS trooper on Memorial Day.

George Floyd’s death is the fuel for demonstrations across the country, but Johnson's is another name at the center of the protests in Phoenix.

Johnson, 28, was shot and killed by an Arizona Trooper early in the morning on May 25. Johnson's family continues to seek answers.

Phoenix police, who took over the death investigation, say the trooper found Johnson passed out in his parked vehicle, which was blocking part of the freeway near Loop 101 and Tatum Boulevard.

The family's attorney, Jocquese Blackwell, says the family has questions as to how Johnson was shot and killed if he was asleep when the troopers approached him. The family is also asking for the identity of the troopers involved in the shooting, which have not been released.

"The question the family has is why do we time and time again find ourselves in a situation when another unarmed black man or black woman has been killed by an individual who has volunteers to protect and serve," Blackwell said.

You can watch the full Wednesday press conference, with the audio from the stop, below:

The attorney for the family of Dion Johnson, the man shot and killed by a DPS trooper last week on Loop-101, is holding a press conference. 12News.com

The audio clip from the stop is below:

Police said there was a struggle that and the Trooper fired their weapon, killing Johnson.  They also say there was a gun recovered from the scene.

The trooper who fired their weapon and another responding trooper were not equipped with body cameras and didn’t have dashcams.

"There’s something suspicious about that," said State Representative Reginald Bolding.

Rep. Bolding echoed Dion's family's concerns a week after his death in a letter to DPS demanding more information.

Investigators haven’t described the struggle that led to the shooting – or how a gun was recovered.

"The lack of information that DPS is providing is something in the community that makes people absolutely wonder what is there to hide," he said.

DPS says they don’t issue body cameras to their troopers and that 122 highway patrol cars are equipped with dashcams.

Governor Ducey’s 2021 budget proposal includes $3 million to buy more than 1,200 cameras for troopers along with another $2 million to hire staff to manage the footage. The FY 2021 budget is still under review.

For now, Rep. Bolding just wants transparency. He asked DPS to release the trooper's name and history with the department.

"Give the family some sense of where this investigation is leading," he said.

Neither DPS nor Phoenix police have released the name of the trooper involved in the shooting, but DPS says they’re on paid administrative leave as the investigation continues.

The Phoenix Police Department, the agency handling the investigation, issued a statement Wednesday night that read, in part:

"At this point in the investigation, there is no known video capturing the shooting. Neither of the troopers were equipped with body-worn cameras. There is no dash-camera video because both troopers were on motorcycles. The ADOT highway cameras are live feed camera that do not record."