State and federal law enforcement officials will use the center as a place to share information that can thwart hackers attempting to access private accounts. 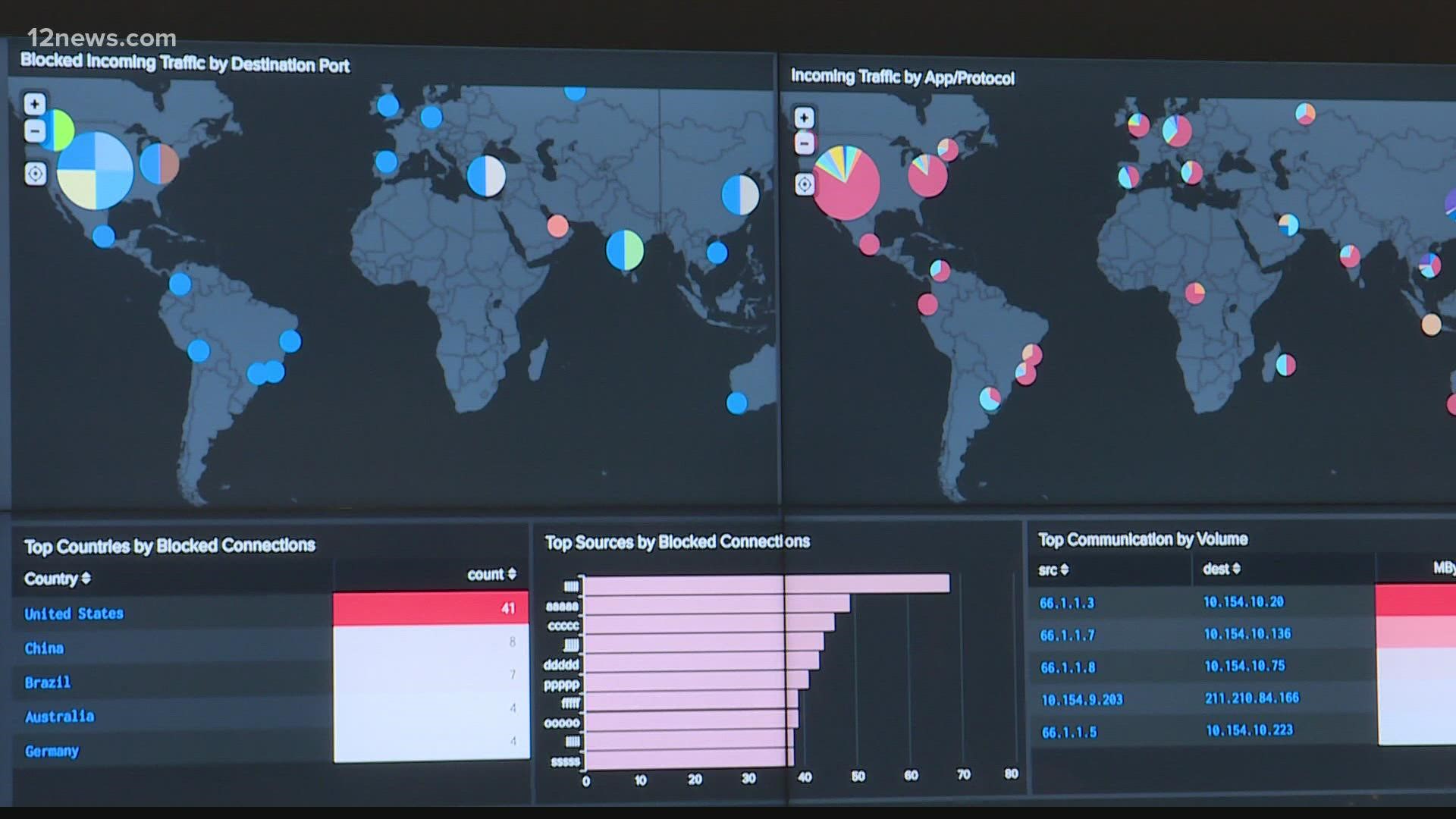 PHOENIX — Arizona has unveiled its new headquarters for the state's war on cyberattacks.

The Cyber Command Center, located in a non-descript, north Phoenix office building, will allow state cybersecurity experts to work alongside their federal counterparts to thwart daily threats of cyberattacks against state resources.

The Cyber Command Center is meant to allow increased information sharing between local, state, and federal agencies to investigate and respond to various cyberattacks.

“Unfortunately, we know that this is something our enemies want to exploit,” said Gov. Doug Ducey. “We're the first state in the nation to put something like this together in terms of investment. It's Homeland Security, its national security. We rely on these people and I have a lot of confidence that they can keep Arizona safe and be a model for other states.”

According to Tim Roemer, director of Arizona Department of Homeland Security, his agency fought against roughly 800,000 cyberattacks in September 2021.

“When I was briefed as a new governor by the FBI… they said we should quit calling it ‘cyberwarfare’ and ‘cybersecurity’ because this is the future of warfare and the future of security,” Ducey said.

A new kind of war

When hackers shut down Colonial Pipeline, a company that supplies roughly 45% of the east coast with fuel, it underscored how dangerous ransomware can be, and just how vulnerable computer systems can be to attacks.

“We know we're under constant cyberattack, everybody is,” said Roemer. “It's inevitable that the cyberattacks are going to come in. We have to do more daily to put ourselves in a better position to defend the state's networks.”

The new Command Center will help cybersecurity experts deal with attacks in a quicker manner. Agencies can now break down the “silos”- compartmentalizing of information within law enforcement agencies- to act quicker on threats as they arise.

“After 9/11, the goal was to break down silos,” said Roemer. “We can't have silos when it comes to cybersecurity. This brings everybody under one roof and gives us the capabilities to put things up on the screen, work in real-time and respond to those [attacks]. We didn't have that before.”

“We live in a digital society. These cyberattacks have the ability to wreak havoc on our daily lives,” Roemer warned.

Roemer points to ransomware attacks -- where hackers lock a victim’s access to online accounts and demands payment for the victim to regain access-- as the biggest threat to the state and private users. He said some ways to stay safer at home include:

“We must do more as a society to be able to prevent these attacks from succeeding because it doesn't just affect our businesses,” said Roemer. “It affects our personal lives and our families as well.”