The animals are originally from Australia and are illegal in some states. 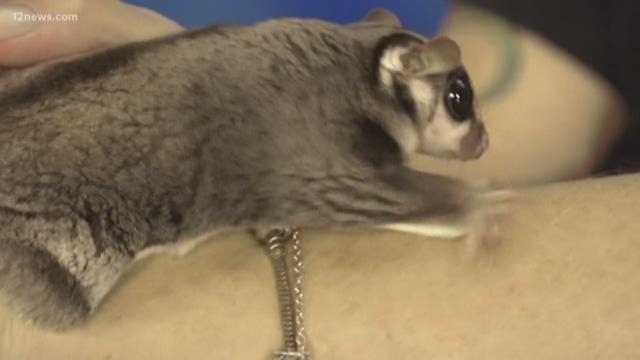 PHOENIX - The Arizona Sugar Glider Rescue says they're overwhelmed with owners of the cuddly critters coming forward to give them up.

"It's extremely frustrating for myself, as the founder of Arizona Sugar Glider Rescue," said Tamra Rothenburger, the group's founder. "For the last seven years, I have watched the increases."

Rothenburger points to a variety of reasons why the bug-eyed animals are surrendered, but says that particularly sellers may not be properly educating the buyers and the buyers may not be doing their own independent research on the critters.

"This is a 12- to 15-year commitment with an animal that has the mental and emotional intellect of 2-year-old child," she said. "You don't just make the decision today that you want this pet. You do your homework."

A Valley woman who asked to remain anonymous says she tried to do her homework by asking a Pocket Pets vendor lots of questions when she spotted the animals at Phoenix Pride's Rainbow Festival.

"I've wanted one for a long time," she said. "I've always been curious about them."

She claims the seller allowed her to hold the animals and provided some information about them, assuring her they would be easy to care for and good for traveling.

After discussion, she says she decided to buy two gliders, two cages and a starter kit that totaled about $1,000.

"The actual animals were not at the festival, they had two they were showing off," she said. "You could buy them on-site, but you could not pick them up there."

The woman claims she met the seller in a parking lot to finishing the purchase and just a few days later discovered the animals were biting her, would not eat and were illegal in California, a state she frequents.

"I asked them all sorts of questions and they just told me what I wanted to hear," she said.

The executive director of Phoenix Pride said the event's vendor policy does not allow for the sale of commercial pets and stated they contacted the vendor from Pocket Pets, who denied selling any animals at the event.

The seller claims the entire transaction took place in the parking lot.

Rothenburger says there is currently a waitlist for gliders to get into the rescue's care and she plans on accepting two gilders from the anonymous buyer.