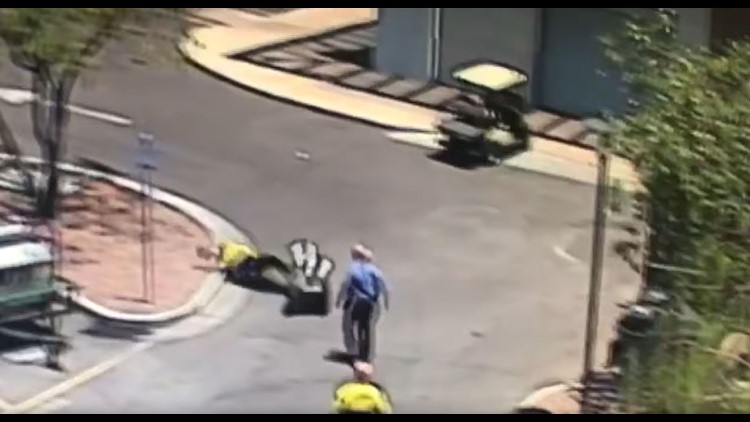 Photo by: 12 News
A former employee of a large private security company claims her one-time supervisor repeatedly lied in court to cover up the severity of her on-the-job injury.

PHOENIX — A former employee of a large private security company claims her one-time supervisor repeatedly lied in court to cover up the severity of her on-the-job injury.

There is no question 56-year-old Christine Long took a hard fall from a Segway on June 9, 2017.

Long recorded the incident with her cell phone off a surveillance video monitor the same day it happened. But Long and her former supervisor tell two very different versions of events before and after the accident.

Those two versions could help determine whether or not Long gets financial compensation for her injury and whether she has a solid civil case against the company in the future.

Long testified in a private court proceeding at the Industrial Commision of Arizona in February that on the day of the June 9, 2017, accident she was ordered by her supervisor to learn to ride the Segway, against her wishes.

Within 20 seconds of riding the vehicle, Long spun off the Segway and her body slammed against a curb, the video shows.

Long claims she’s had lingering effects from the fall in her leg and back, and the video is now evidence in an injury compensation claim at the Commission.

“What I thought was that it would take four to six months for my check and that it would be 70 percent of a 40 hour work week,” Long said.

Three months after she left the job, she called Allied Universal to inquire about her status. The company notified her she had been terminated and there was no record of her ever having an accident, Long said.

“It’s cruel. It’s cruel to treat something like that,” Long said. “You hurt someone and then you say it didn’t happen.”

During the commission hearing earlier this year, Long’s former supervisor, Jason Morton, testified that Long willingly got on the Segway on the day of the accident, that she never mentioned to him she was injured in the months after the accident, and that she showed signs of a limp and briefly used a cane before the accident took place.

Long and a second employee at Allied Universal dispute those claims.

“To say I used a cane before the accident is just false,” Long said.

Morton also claimed he made it clear to Long she was being terminated on her last day of work, Morton testified.

A second employee who now considers himself a whistleblower in Long’s case is Carl Wilson. Wilson, a 71-year-old former law enforcement detective from the country of Guyana, has been working for Allied Universal for more than four years.

Wilson and Long worked closely together before and after the accident at the San Tan Village outdoor mall. Wilson was also an eye-witness to Long’s fall off the Segway.

Wilson said he agreed to speak with 12 News because he felt Morton should be exposed.

Instead, Wilson was mentioned in a peculiar exchange during the hearing. The attorney representing Allied Universal and its insurance carrier, Kirk Barberich, was questioning Allied Universal supervisor, Jason Morton. Morton still works for Allied Universal at the San Tan Mall location and is the one who is accused of coercing Long to learn to use the Segway.

According to minutes of the proceedings requested by 12 News through a public records request, at the end of questioning, Barberich asked Morton about the other employee, Wilson.

“There was a witness subpoenaed by the name of Carl Wilson, I believe, with a ‘C’,” Barberich said.

“And is he – is he still employed at Allied?” Barberich asked.

“No. He’s no longer employed with Allied,” Morton said.

That appears to be a false statement.

Wilson tells 12 News he remains an employee of Allied Universal and was suspiciously transferred to another location in November 2018 on the same day Morton called him by phone and asked him whether he had received a subpoena to testify in court.

“I don’t like seeing wrong things, people not speaking the truth,” Wilson told 12 News. Wilson said he believes he was transferred in order to remove him from the possibility of being called into court to testify about what he knew. He disagrees with several aspects of Morton’s testimony regarding Long before and after the accident.

“I believe the reason they get rid of me (from the San Tan location) is because I actually saw I was a witness the accident. And they afraid that I might, you know, squeal,” Wilson said.

Wilson said on the day of the accident, he watched Morton order Long to get on the Segway, despite Long’s objections. He also said Long showed no signs of limping or using a cane before the accident.

“She was physically fit,” Wilson said. “But after the accident I noticed she was moving slow and with a limp. So I said “Christine, you are in pain.’ she said, ‘After that Segway, I’m feeling pain’,” Wilson said.

According to Wilson, as the weeks progressed after the accident, Long began using a cane and riding a golf cart to get around. Wilson said it was common knowledge among employees that Long was injured because of the Segway accident.

Long’s attorney, Chad Snow, said he originally planned to call Wilson to testify in the matter.

“I did request a subpoena for the testimony of Carl Wilson but without reviewing the transcript of the hearing cannot state with precision why we didn’t insist on his testimony at the time – most likely because we saw it as a purely medical question,” Snow wrote in a statement to 12 News.

The judge overseeing the complaint is expected to issue a ruling on Long’s case any day. Determining whether Long is owed compensation from Allied Universal’s insurance carrier depends also depends largely on the content of Long’s medical records before and after the accident.

There is a possibility the judge’s decision could be delayed, Snow said. He is considering whether to ask the judge to re-open the case to allow an affidavit with Wilson’s testimony.

“Obviously if we have credible evidence that Mr. Morton gave testimony that he knew or should have known to be false, I would ask the judge to reopen the record and allow a further hearing for the testimony of Mr. Wilson, in rebuttal of Mr. Morton’s statements,” Snow wrote. “I would also ask for any other remedy available against Mr. Morton for having knowingly provided false testimony.”

When asked why Morton falsely claimed under oath that Wilson was not employed by Allied Universal, a spokesperson for the company said they would not comment on the case. The spokesperson issued a written statement to 12 News and declined to answer any questions.

“Allied Universal is committed to the safety of its employees and the communities we serve. We take seriously all claims against the company, but are unable to comment on pending litigation. We avoid trying cases in the media and look forward to the facts of this matter being presented in the course of the proceeding,” said Vanessa Showalter, Corporate PR Manager for Allied Universal.

Ms. Long’s claim involves a very complicated medical question about whether an “injury” arose out of the accident that without question occurred on July 16, 2017. Part of determining that question was hearing testimony from her supervisor who was present at the time of the injury, Jason Morton.

I did request a subpoena for the testimony of Carl Wilson but without reviewing the transcript of the hearing cannot state with precision why we didn’t insist on his testimony at the time – most likely because we saw it as a purely medical question.

Obviously if we have credible evidence that Mr. Morton gave testimony that he knew or should have known to be false, I would ask the judge to reopen the record and allow a further hearing for the testimony of Mr. Wilson, in rebuttal of Mr. Morton’s statements. I would also ask for any other remedy available against Mr. Morton for having knowingly provided false testimony.