A Phoenix-area man and his wife posted a now-viral video on social media, claiming he was bitten by bed bugs at Walmart. 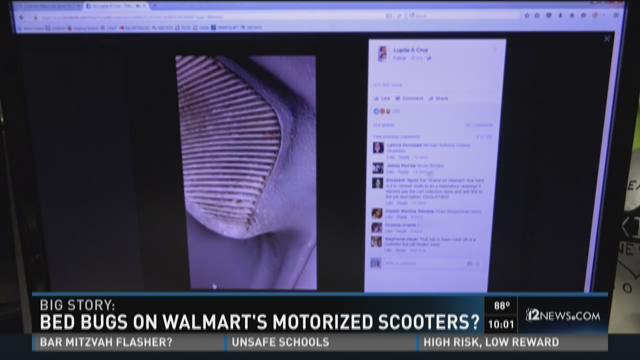 PHOENIX - A Phoenix-area man and his wife posted a now-viral video on social media, claiming he was bitten by bed bugs at Walmart.

The video is disturbing and shows what appear to be tiny bugs crawling all over one of the store's motorized scooters inside the Phoenix store near 35th Avenue and Bethany Home Road.

Since the post went up on social media, Walmart has said very little. The doors are open for business tonight, but the only response 12 News got was through email.

A Walmart spokesperson wrote, "The affected carts have been removed from service."

When you watch the video, it just makes your skin crawl. In the post, Lupita Cruz talked about the alleged infestation. She explained how disgusting it was to discover the bed bugs. She said her husband has an injured toe and he needed to use one of the electronic chairs. As they were going through the store, she said his back started itching.

When he felt it getting worse, she said they stopped by the restroom. When he got up to check the chair, they found it was full of the bugs and he had bites all over his back. Customers are just completely disturbed by this.

“That’s so unsanitary,” said Alex Chairez. “I mean, I work at a sub shop and cleaning this is my whole thing and so that bothers me a lot.”

“It’s just really insane and then on top of that, how did the scooter even get to Walmart?” Paul Drake asked. “I mean, it should’ve got checked. I mean, business is just bad right now. I wouldn’t buy anything from Walmart.”

The woman who posted the video said they found bugs on another chair as well. When they notified the manager, she said the manager told them he didn’t see any bugs.

But she said she took pictures and video as proof. When another manager was called, she didn’t seem to be surprised by it and told them to do an incident report.

In the post, Lupita said that after the report was done, they wouldn’t give them a copy of it, so she posted the pictures and video on social media.