Once the group got to a cliff in the mountains, the weather turned, with snow and wind blowing in, making it too hard to get off the cliff. 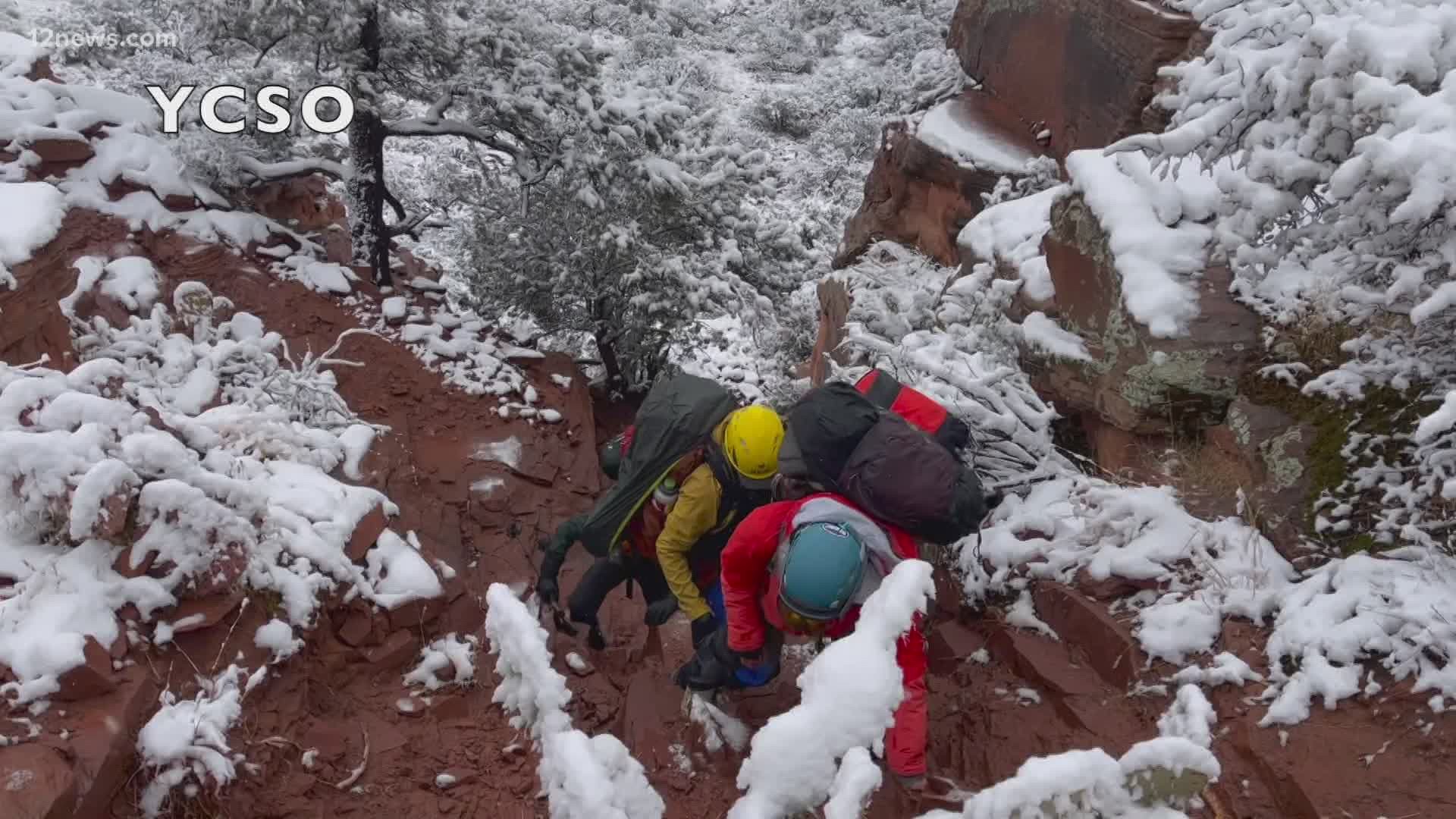 SEDONA, Ariz. — Three stranded hikers were pulled off a mountain in northern Arizona on Tuesday after spending three days exposed to the winter storm that slammed the state.

The three unidentified hikers set off for a day hike near Bear Mountain while the weather looked peaceful.

According to Sedona Fire District, once the group got to a cliff in the mountains, the weather turned, with snow and wind blowing in, making it too hard to get off the cliff.

Around 4:30 p.m. Sunday, Sedona Fire District received a 911 call from the hikers, who were able to get a moment of decent cell service.

Search and rescue crews from four surrounding counties were dispatched to the mountain.

“I would say that they are very lucky to be alive,” said Jon Davis, with SFD, looking back at the rescue.

Search and rescue crews were not able to reach the hikers on Sunday night, so the trio had to spend the night on the cliff, exposed and unprepared for the winter storm.

Early Monday morning, a crew was able to get close enough to the hikers to toss them some survival equipment to help them stay warm.

Meanwhile, the Arizona Army National Guard staged a Blackhawk helicopter at Sedona Airport, waiting for a break in the weather to rescue the hikers.

It would be another day before that could happen.

“Had the rescue crews not been able to reach them when they did and provide that extra survival equipment, I think this would have turned out very differently,” said Davis.

Around 4:00 p.m. Tuesday, Air National Guardsmen saw their chance, a small break in the weather, and took off in the Blackhawk to pluck the stranded hikers from the mountain.

Once on the ground, all three were taken to Verde Valley Medical Center with minor injuries related to the cold, said Davis.

Yavapai County Sheriff David Rhodes, one of the emergency responders on the scene of the rescue is quick to praise the volunteers who comprise the Search and Rescue teams from Coconino, Gila, Maricopa and Yavapai Counties that responded to this rescue call.

“The real heroes are the volunteers that train relentlessly for scenarios just like this, on their own dime, on their own time. They buy much of their own equipment to be prepared to do something like this and they don’t get much help in the way of dedicated funding. We need to take a look at that, I believe, as a state.”