The Heaven’s Gate “class” was gone after the 1997 mass suicide near San Diego, but its ideas survived, with several connections to Arizona. 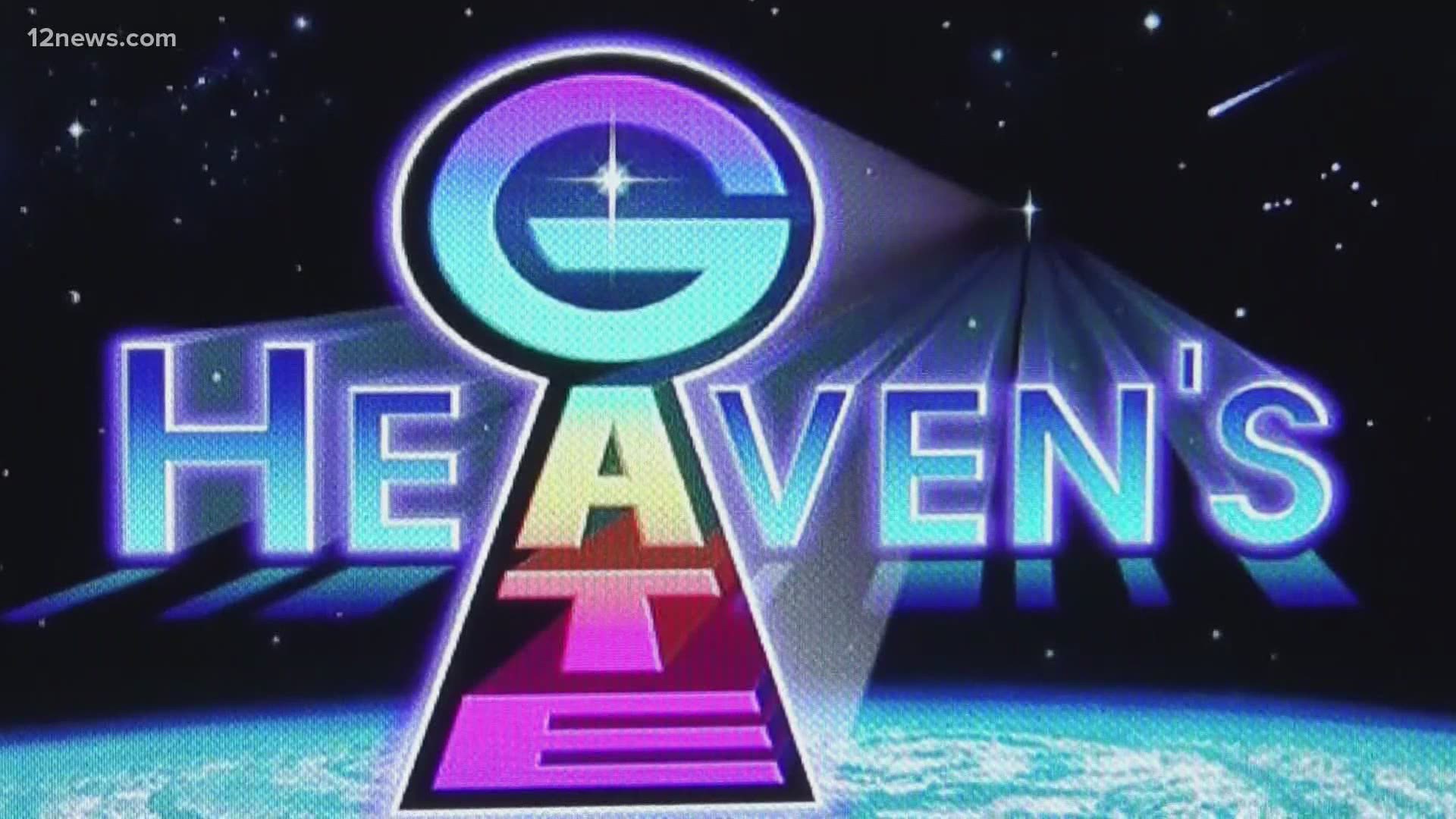 PHOENIX — Thirty-nine members of the Heaven’s Gate UFO cult drank vodka and took phenobarbital in a mansion outside of San Diego in 1997 before laying down to die.

Members of the group believed they would leave their bodies behind and catch a ride on a spacecraft that was hiding in the tail of the Hale-Bopp comet that passed close by Earth.

Video of the mass suicide showed the bodies lying in beds around the mansion, with purple clothes over their heads. They were dressed identically in black sweatsuits, Nikes and patches on their arms that read “Heaven’s Gate Away Team.”

The Heaven’s Gate “class” was gone, but Heaven’s Gate didn’t die in San Diego: The ideas survived, with several connections to Arizona.

The members of Heaven’s Gate made their living with web design. And they ran a website that was -- for its time -- fairly sophisticated.

That website stayed up after the mass suicide. Someone is paying the bills and keeping the site active and unchanged.

It is exactly the way it was in 1997, complete with early-internet graphics and text.

12 News has learned that website is being run by a couple living in Scottsdale.

The address at the bottom of the page for people to write and get copies of the cult’s texts leads to a strip mall at Tatum Boulevard and Greenway Road. The business it points to no longer exists.

12 News has been unable to make contact with the couple listed as running the site.

But another former cult member, who goes by the name CRLODY (the cult gave its members new names), did respond to questions and said the Scottsdale couple is actually the second round of custodians of the site.

When the cult members killed themselves, they sent packets of information to former members detailing their wishes. The packets included instructions for what to do with the website as well as their personal belongings.

The first person to take over the Heaven’s Gate website was a former member called RKKODY, whose real name was Charles Humphrey, from Colorado.

“Eventually, I met up with RKKODY that summer in the Bay Area and we started our little project of trying to distribute the group's information,” CRLODY wrote via email.

“In late December, we parted ways and I eventually wound up in Wisconsin. I spoke to him a few times on the phone and we e-mailed and then he sent me his last e-mail in February, told me he was going out to one of the spots that we'd been to and leaving again.”

Charles Humphrey was planning on “leaving,” or dying by suicide, to follow the rest of the cult.

A deputy went into the desert near Blythe, on the Arizona-California border, and found a tent.

Inside was Humphrey’s body, dressed the same as the other Heaven’s Gate members. He had a purple shroud nearby and a hose running from his car’s exhaust.

It was his second suicide attempt. This time he let a note with the instructions “DO NOT REVIVE.”

“I'm glad that he didn't wake up chained to a hospital bed that time,” CRLODY wrote.

With Humphrey gone, the website was turned over to the Scottsdale couple, who apparently continue to run it 23 years later.

In the letters sent out after the mass suicide, the Heaven’s Gate cult made reference to a “Phoenix satellite.”

CRLODY said it was a house where other members lived, away from San Diego.

The letters made reference to prospective members of the group being allowed to stay there, even as the cult was planning its mass suicide.

CRLODY did not know where the “Phoenix satellite” was.

The Heaven’s Gate website does not actively recruit new members. It includes no new information, but does include a statement disavowing suicide as no longer the path to heaven.

But the former members of the cult who survived are still struggling with heir beliefs and with being “left behind.”

CRLODY wrote that he left the group because he believed he couldn’t adhere to the group’s expectations.

12 News asked if he still believed in what they taught.

And 12 News asked CRLODY if he would have died by suicide in order to “follow” the group.

”That's a difficult question to answer,” he wrote.

“It's actually something that I still wrestle with to this day. I had a plan in place to leave at the end of March of that year to head west and hope that I could find them. When the news hit, I realized that I had waited too long.”

If you are in need of immediate help, you can call 911 or reach the National Suicide Prevention Lifeline at 1-800-273-8255 or chat with someone online.