Rula Bula Irish Pub says it was not given the option to renew its lease on Mill Avenue with Canada and Florida-based landlord. 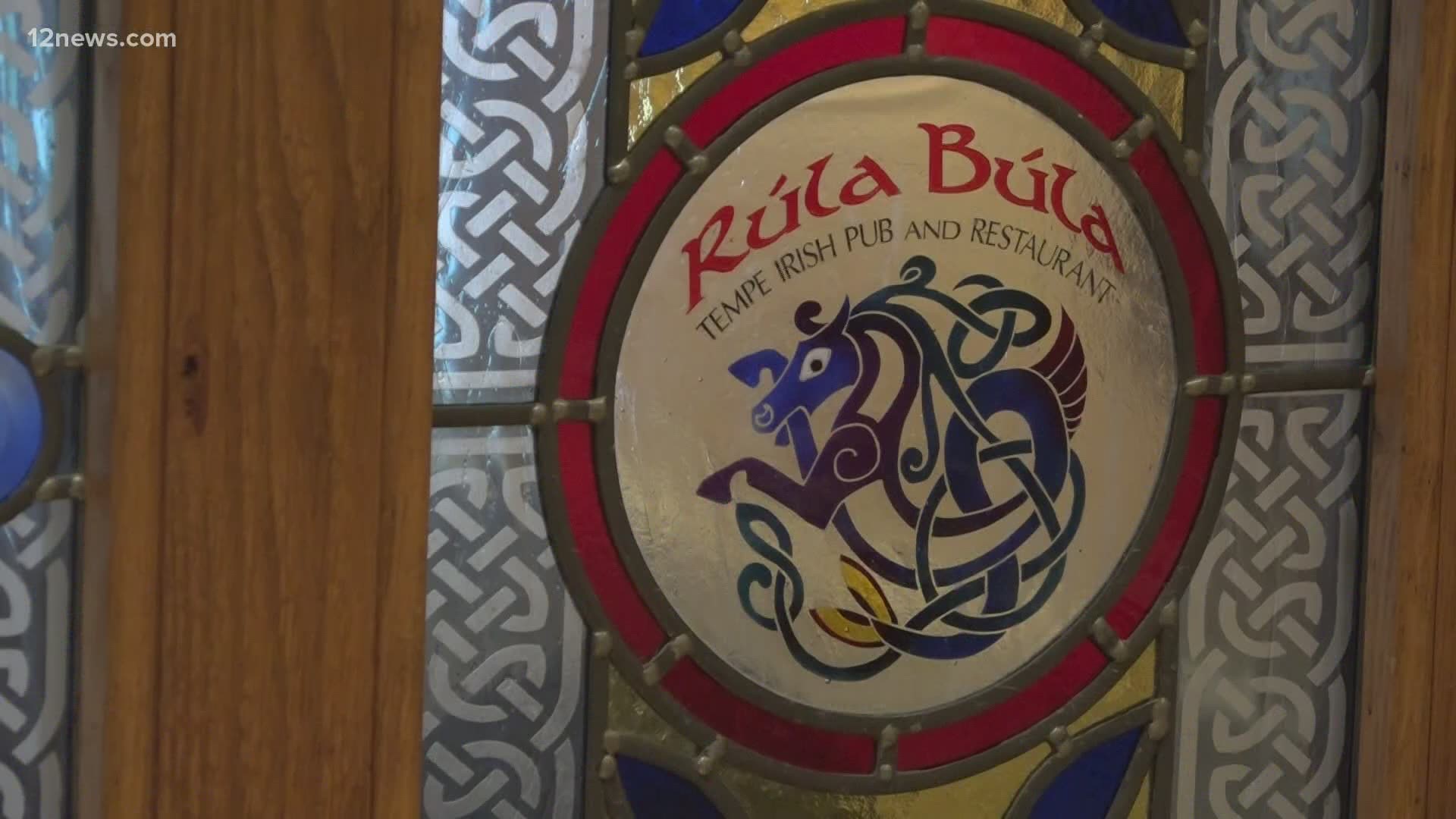 TEMPE, Ariz — Rula Bula Irish Pub said it was not given the option to renew its lease, meaning it will close its doors following 20 years on Mill Avenue in Tempe.

"We don’t have enough time to put a contingency plan together," Founder Steve Goumas said.

"There has been some serious misinformation about Rula Bula leaving 401 S Mill that is not only categorically false, but is also personally very upsetting to me and contrary to our values as a company." Sam Gordon with Wexford Developments said in an email

According to a GoFundMe page set up by Goumas, he asked to sign a lease ensuring 30 to 100 years. The hope was to stay "in the historic Andre Building."

Rula Bula has been a Mill Avenue staple for the past two decades.

The pub was originally a prototype, attempting to bring the Irish pub experience to America.

Goumas said the bar was made in Ireland, before being placed piece by piece in 40 foot containers shipped to Arizona.

"It is an Irish oasis, it’s a getaway, it’s a respite," Goumas said. "You come in off Mill, and you come in Rula Bula and you escaped."

Rula Bula was also a watering hole for the late Pat Tillman while he was a football player at Arizona State University. Tillman became a professional player, but after the terror attacks on 9/11, Tillman enlisted in the military before losing his life overseas.

After Tillman's passing, Goumas said his friends would still stop by and buy a pint for their friend.

It was the start of "Pints for Pat" which has raised thousands of dollars for the Pat Tillman foundation.

But earlier this year, Goumas said the pub got the bad news.

"The landlord says this was leased out to a competitor,” Goumas said.

The landlord company, Wexford Developments said the company initially offered terms to Rula Bula to stay after purchasing the property.

"To say that we ‘forced them out’ or ‘did not respond to their requests’ is categorically false. We wanted nothing more than to extend Rula, albeit at a rate commiserate with what we paid for the building, and commiserate with what reasonable restaurant sales are on Mill Avenue." Gordon said.

In the initial email, provided to 12 News. Wexford said in part:

"The purpose of this email is to outline the terms we are prepared to offer Rula Bula for a lease extension at 401 S Mill Avenue, Tempe, AZ. I should mention that we continue to receive inquiries from interested retail users for the restaurant space on the ground floor, however, given we have an existing relationship, coupled with our view that Rula Bula’s Irish Pub concept makes a lot of sense for this location, our strong preference is to complete a direct renewal with you."

Gordon said after negotiations, Rula Bula decided to not come to terms. Weford then entered into a new lease agreement with a local restaurateur to take over in the summer of 2020.

Once the pandemic hit, Gordon said the new tenant asked to delay the terms of the deal by one year. Gordon said Wexford then went to Rula Bula to get a 1 year extension on the lease to June 30, 2021.

“Despite the realities of our current situation, Rula Bula’s long term community involvement and consistency in providing quality food, beverage and service, in an authentic and enjoyable atmosphere, has allowed Rula Bula to take its place as the longest surviving independent restaurant on Mill Avenue,” said Goumas.

Goumas wrote that the fundraising page was created as a way to "transition the business as well as to assist dedicated staff financially, and aid the local community including the homeless and veteran charities."