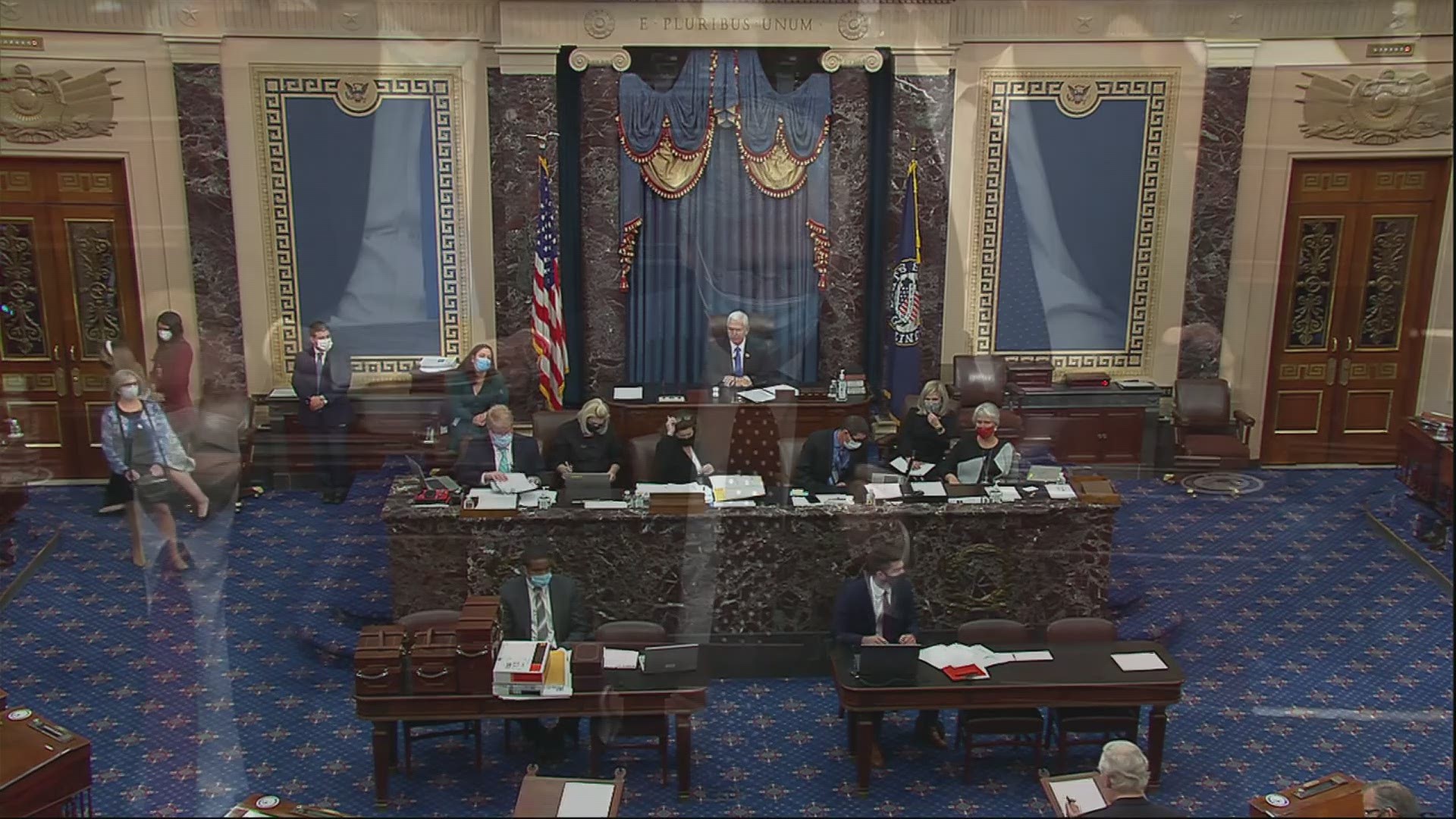 WASHINGTON — The U.S. Capitol broke into chaos right as multiple members of Congress were debating the legitimacy of the election results in Arizona.

Congressional members from Arizona who were in both the House and the Senate at the time of the siege are shedding light on a timeline of specific events that happened on Jan. 6.

Below is a timeline of the events provided by Sen. Kyrsten Sinema and Rep. Ruben Gallego about the insurrection — and the story of a heroic act from one Capitol Police officer and the quick actions of others around them.

Multiple lawmakers in both bodies of Congress challenged the electoral votes of President-elect Joe Biden in a joint session of Congress forcing both the U.S. House of Representatives and the U.S. Senate to adjourn and head toward their own respective chambers to argue about unfounded election fraud claims.

As both the House of Representatives and the Senate had convened separately, Sen. Kyrsten Sinema was the last to deliver remarks rejecting the notion that Arizona's election saw any irregularities.

This is when the first reports came in from Capitol Police to the congressional floors that rioters supporting President Trump were inside the buildings.

"When the doors flung open and tons of staff pushed quickly into the room, that's when we knew something was wrong," Sen. Sinema told WUSA9 in an interview.

Credit: AP
House members prepare to leave the floor as protesters try to break into the House Chamber at the U.S. Capitol on Wednesday, Jan. 6, 2021, in Washington. (AP Photo/Andrew Harnik)

As Sinema spoke, Capitol Police Officer Eugene Goodman was just outside the Senate entrance. Badly outnumbered by rioters, he was able to somehow reroute the rioters from the Senate floor, according to Sinema.

"When that police officer led that mob away from the doors, I was speaking. He was all by himself facing a mob of individuals rushing into the Senate and he bravely maneuvered that mob to a side of the Senate outside of the floor."

Sometime during or immediately after Sinema's speech, Vice President Mike Pence was quickly evacuated by members of his Secret Service detail.

At 2:13 p.m., the Senate was adjourned and a live microphone picked up an aide telling Sen. James Lankford (R-OK) that there were protesters in the building.

Just as that was unfolding, Capitol security members are seen on the Senate video rushing the Senate Pro-Tempore Charles Grassley (R-IA) off the Senate floor and out the door.

As Senators were under siege on the north side of the Capitol building, House leadership on the south side was evacuated so fast that Rep. Gerry Connolly (D-VA) told WUSA9 that House Speaker Nancy Pelosi left her iPhone behind on the House floor.

Capitol Police announced that the U.S. Capitol was overrun by rioting Trump supporters just after Pelosi and the Majority Leader Steny Hoyer (D-MD) were being evacuated.

The House adjourned at 2:29 p.m. as Rep. Paul Gosar (R-AZ) was delivering remarks objecting to the certification of Arizona's votes.

"There was a call for people to start preparing their gas masks because they're deploying tear gas to keep these people at bay, said Rep. Ruben Gallego (D-AZ).

Gallego, a Marine veteran, jumped into action. He shouted orders from on top of a chair to fellow Congress members and their staff as the rioters moved closer to the House Chamber.

Credit: AP
Rep. Ruben Gallego, D-Ariz., stands on a chair as lawmakers prepare to evacuate the floor as protesters try to break into the House Chamber at the U.S. Capitol on Wednesday, Jan. 6, 2021, in Washington. (AP Photo/J. Scott Applewhite)

"There's like mass panic starting to happen so I get on a chair and I start giving instructions eventually the pounding on doors became very strong all over. we were clearly close to getting surrounded," said Rep. Gallego.

"I think there were only two security guards between us that flimsy door and 50 feet of carpet was all that really stopped that mob."

Once they were safely out, Congressman Gallego actually helped members of the media hide in his office because Capitol Police wouldn't let them into the secure space with congressional members.

Gallego snapped this picture as they finally evacuated the House chamber.

Credit: photos provided to WUSA9 for use in this story

When Sen. Sinema was asked about what Congress members talked about while sheltering in place, she said members were resolved to return that night — and do their job by certifying the election.