No criminal charges against officers who shot and killed Stephon Clark

It has been almost a year since the deadly police shooting of Stephon Clark on March 18, 2018.

Sacramento County District Attorney Anne Marie Schubert announced during a press conference officers Terrance Mercadal and Jared Robinet did not break any laws when they shot Stephon Clark after the 22-year-old ran from them into his grandparents' backyard.

"There's no question that a human being died," Sacramento County District Attorney Anne Marie Schubert said during the press conference. "But when we look at the facts and the law, and we follow our ethical responsibilities, the answer to that question is no. And as a result we will not charge these officers with any criminal liability related to the shooting death and the use of force on Stephon Clark."

Schubert said the use of lethal force used by Officers Mercadal and Robinet was lawful. The officers have said they thought Clark, a vandalism suspect, had a gun but investigators found only a cellphone.

The city has been bracing for protests ahead of the decision, with business owners warned by a business association and state government workers told by legislative officials in recent days to stay away from downtown at least through the weekend.

"This is a very difficult day for the city of Sacramento," Mayor Darrell Steinberg said at a press conference that followed Schubert's announcement. "I am deeply sorry for what happened to Stephon. The outcome was wrong. He should not have died."

Steinberg said the community and the city's leadership have different questions for the DA. The mayor noted rules need to be changed to require officers the ability to prevent a potentially lethal confrontation in the first place.

"Our question is was the outcome wrong. And the answer is yes," Steinberg said. "I think police officers have a very tough job. they put their lives on the line and at the same time they have the awesome power to take a life." 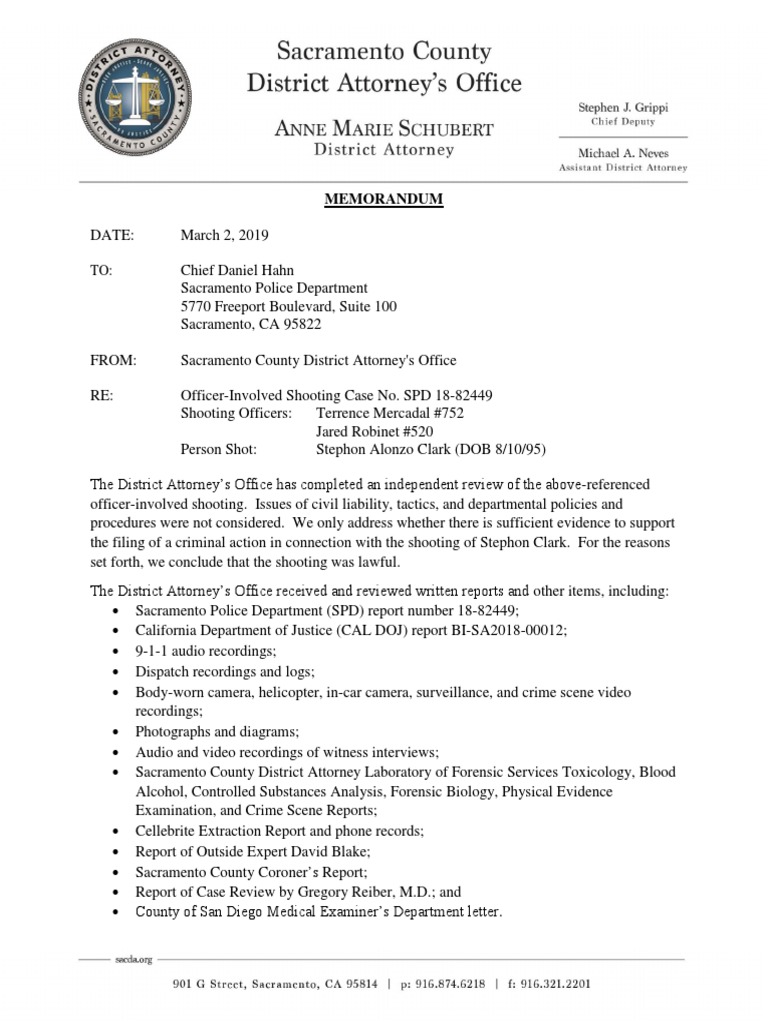 Clark Shootind DA to SPD Memo
Deputy Gomez saw Clark looking into the glass door in the backyard of 7570 29th Street and then saw Clark pick up an object from directly north of the door. Clark then swung the item at the door, breaking the glass. Eighty-nine-year-old Bill W. lived at 7570 29th Street.

Schubert said the decision not to file charges against the officers "does not diminish in any way the tragedy, the anger and the frustration that we heard since the time of his death."

She added: "We cannot ignore that there is rage within our community."

Protests after the shooting were largely peaceful but disrupted downtown professional basketball games and freeway traffic.

Clark's family, including his two sons, his parents and his grandparents, filed a wrongful death lawsuit in January seeking more than $20 million from the city, Mercadal and Robinet, alleging that the officers used excessive force and that he was a victim of racial profiling.

One of the officers who shot Clark is black and the other is white, police said.

Police said Clark was facing officers when he was killed, moving forward with his arms extended and an object in his hands.

Police video of the shooting does not clearly capture all that happened after Clark ran into his grandmother's backyard.

It shows him initially moving toward the officers, who are peeking out from behind a corner of the house, but it's not clear whether he was facing them or that he knew the officers were there when they opened fire after shouting "gun, gun, gun." The video shows Clark staggering sideways and falling on his stomach as the officers continue shooting.

Dr. Bennet Omalu, the pathologist whose study of chronic traumatic encephalopathy in football players prompted the NFL to adopt new safety rules designed to prevent concussions, said the autopsy he conducted for the family showed police shot Clark seven times from behind.

The official autopsy made public later said Clark was most likely shot as he approached police, consistent with the officers' story. The pathologist retained by the Sacramento County coroner said Omalu mistook an exit wound for an entry wound, leaving the impression that police first shot Clark from the back, though Omalu defended his conclusion.

California Attorney General Xavier Becerra is conducting his own investigation at the request of local officials.

Use of force experts have said there was little chance the officers would face criminal charges under court decisions that let officers use deadly force when they have a reasonable fear of being harmed. The standard makes it rare for officers to be charged after a shooting and rarer still for them to be convicted.

Clark's shooting helped prompt pending state legislation that would allow police to use deadly force only if there if there is no reasonable alternative, including non-lethal force or efforts to calm the situation.

If you're viewing on the ABC10 App, tap here for multimedia.

Se’Quette Clark, the mother of Stephon Clark, says she spoke with the district attorney in a private meeting on Saturday, March 2 - prior to the noon announcement of the release of the findings in the shooting death of Stephon Clark in 2018.