She plays soccer and flag football, earning the respect of her teammates through her hard work in practice. 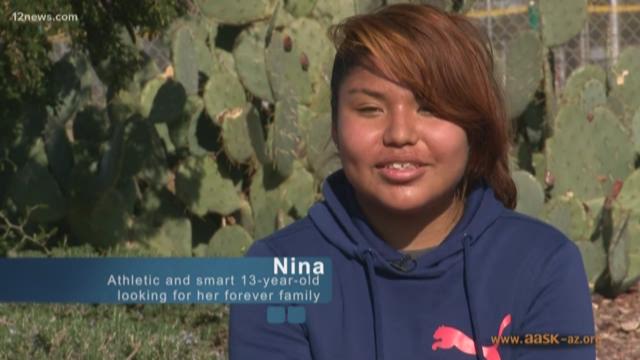 “I really like to tell people that I want to be president,” the eighth-grader says, “but I know I have to be mayor or senator first.

“I just want to make a change in the world,” she says, adding that change includes making things better for children in foster care.

“I want to know that kids out there are going to have homes out there to sleep in, that they have families who are there for them."

Meanwhile, until that first campaign, Nina stays busy with sports and school – and doing well in both.

“She is such a smart girl,” says Rene Durfee, Nina’s mentor for four years.

“She is great at making pies,” Durfee says.

Nina has played soccer since age 8, but recently took a dive into a new sport – flag football. Classmates were surprised she would try out for the middle-school team.

“I ended up making the team, but it was hard being a girl,” she says.

But, she worked extra hard in practice.

“I ended up being the best nose tackle and I got a lot of flags,” Nina says, adding that she earned the respect of the boys on the team.

Durfee says Nina would thrive in a two-parent household and would be a great sister.

Nina is confident she could contribute to a forever family.

Watch the stories of children in foster care waiting on forever families each week on the Wednesday’s Child segment each week between 5-6 a.m. on 12 News (KPNX). You can also view previously aired stories at www.aask-az.org.