As temperatures rise, so does the rate for cats in heat, and it’s causing some neighborhoods in the Valley to see more litters of kittens. 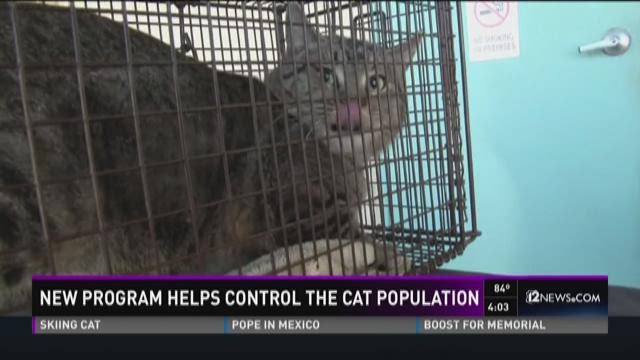 Love is not only in the air, it’s also in the alley.

“Cats and pitbuls are the most at-risk for overpopulation and going into our shelters,” said Kaitlyn Wright with Altered Tails Barnhart Clinic. “So, as soon as we can help you, we want to make that first step.”

As temperatures rise, so does the rate for cats in heat, and it’s causing some neighborhoods in the Valley to see more litters of kittens.

“So there is more chance for accidental litters out there,” Wright said, “especially with the community and with the outdoor cats. So, it’s just a great time to focus on spay and neuter.”

According to Wright, cats can have up to three litters a year, giving birth to four to six kittens each round. Usually during the summer months, the Arizona Humane Society and Maricopa County Animal Care and Control will see an average intake of 580 kittens entering the shelter per month. The "Fix.Adopt.Save" program helps to reduce that number and control the strays on the street.

Volunteers with the program can pick up humane traps. They place food on one end of the trap and as a cat enters the cage, the cat’s weight closes the door behind them. The volunteer takes the cat to Altered Tails where the feline gets sterilized. The cat is then kept overnight and released back into the same neighborhood it was picked up in.

“That keeps the population stable but over time it will reduce the number of cats there,” said Wright, “because cats are still territorial, so they’re not going to let other cats into the neighborhood that haven’t been fixed.”

To sign up for the program or learn more information, visit: http://www.fixadoptsave.org/.