Someone created a memorial using wooden crosses at the intersection where the accident happened. 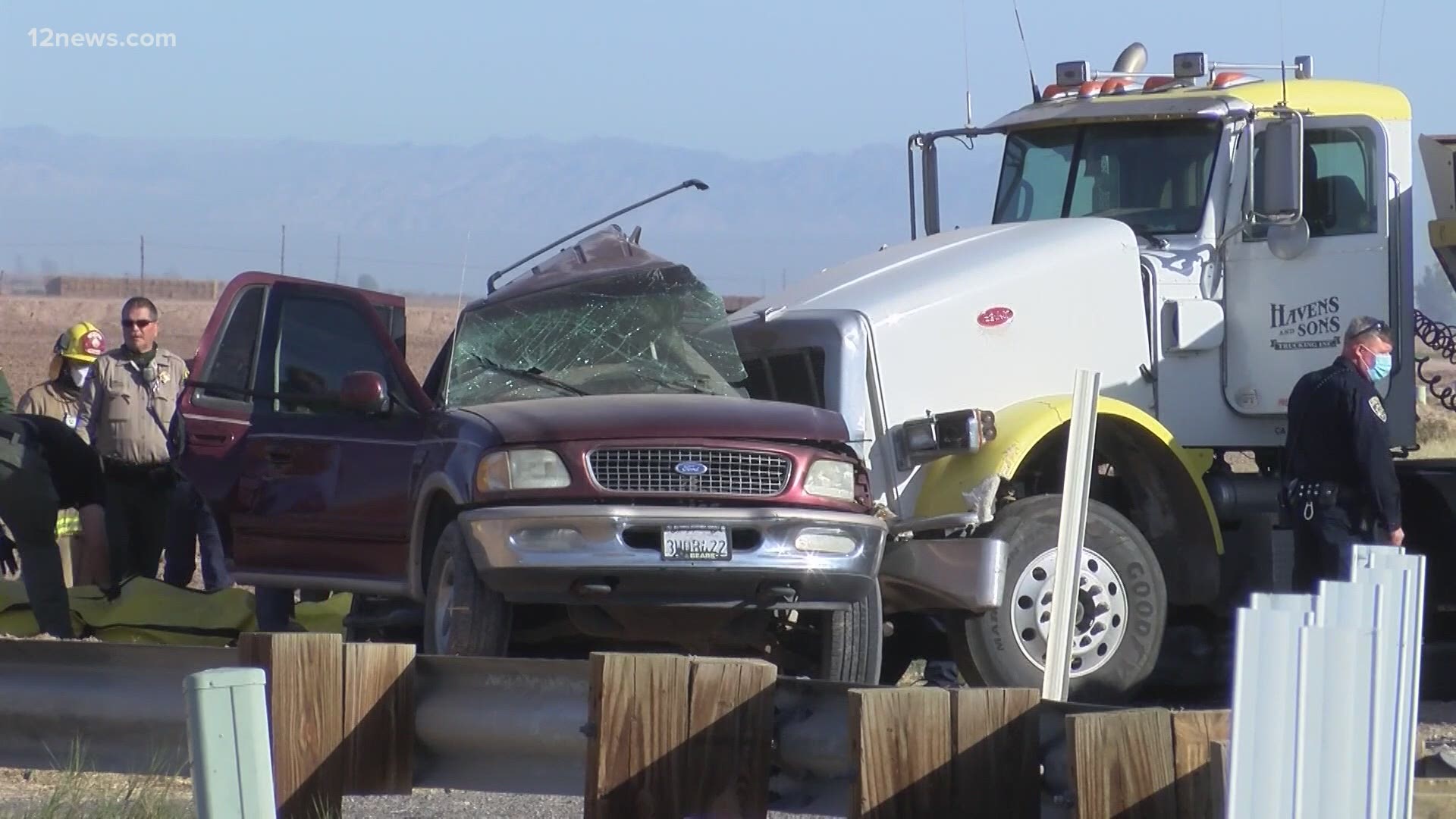 The collision occurred at about 6:15 a.m., when a tractor-trailer struck an SUV carrying an estimated 25 people on State Route 115, just north of Holtville and about 15 miles from the U.S.-Mexico border, according to the CHP.

"The patients are being cared for in the UC San Diego Medical Center trauma center located in Hillcrest," said Jacqueline Carr, executive director of communications for UC San Diego Health. "Due to privacy protections, patient conditions will not be given unless authorized by the patients."

During a news conference Tuesday afternoon, CHP Border Division Chief Omar Watson gave a final update for the day. He said there were 25 occupants in the vehicle and 12 of them were found dead at the scene. Due to the high number of people in the vehicle, multiple passengers were ejected from the vehicle.

"Some people were ejected onto the pavement, onto the ground, (and) passed away as a result of those injuries," Watson said during a news conference. "Other people were found deceased within the vehicle, and some of the wounded were able to pull themselves out of the vehicle."

The collision occurred when the passenger-packed Ford Expedition pulled onto the highway into the path of the tractor-trailer under circumstances that remain under investigation, the chief said. CHP said the vehicle was not being chased by law enforcement. It is unknown if the vehicle blew through a nearby stop sign.

The SUV driver, who died at the scene, was a 22 year old from Mexicali. The semi was being driven by 68-year-old Joe Beltran of El Centro who suffered injuries described as moderate and is in the hospital. CHP said the SUV only had two seats in the front and all of the back seats had been removed, creating more space for passengers.

Chief Watson also confirmed an additional person died after being transported to the El Centro Regional Medical Center (ECRMC). The age range of people involved in the crash are 16-55.

Six patients were being treated at ECRMC, said Judy Cruz, emergency-department director for the hospital. Another three were taken to another local treatment center, she said. ECRMC gave an update earlier in the day. That can be seen here.

Four other patients were airlifted to Desert Regional Medical Center in Palm Springs, where three were admitted to an intensive-care unit, hospital spokesman Todd Burke said.

Four of the crash victims were later moved from El Centro Regional Medical Center to UC San Diego Health. Two others were taken to Scripps.

The affected stretch of SR-115 was closed to through traffic for "quite a few hours" to allow for investigation and cleanup, the CHP chief said. And although SR-115 was closed to traffic most of the day, someone has already created a memorial using wooden crosses at the intersection where the accident happened.

The agency is currently working with the Mexican Consulate to figure out who is deceased so they can ultimately notify their next of kin.