Petition calls for removal of Emancipation Statue in Capitol Hill's Lincoln Park; Some fight to protect it

As an online petition makes its rounds, history buffs emerge to speak out against it in hopes of preserving the legacy of freed slaves who funded the statue. 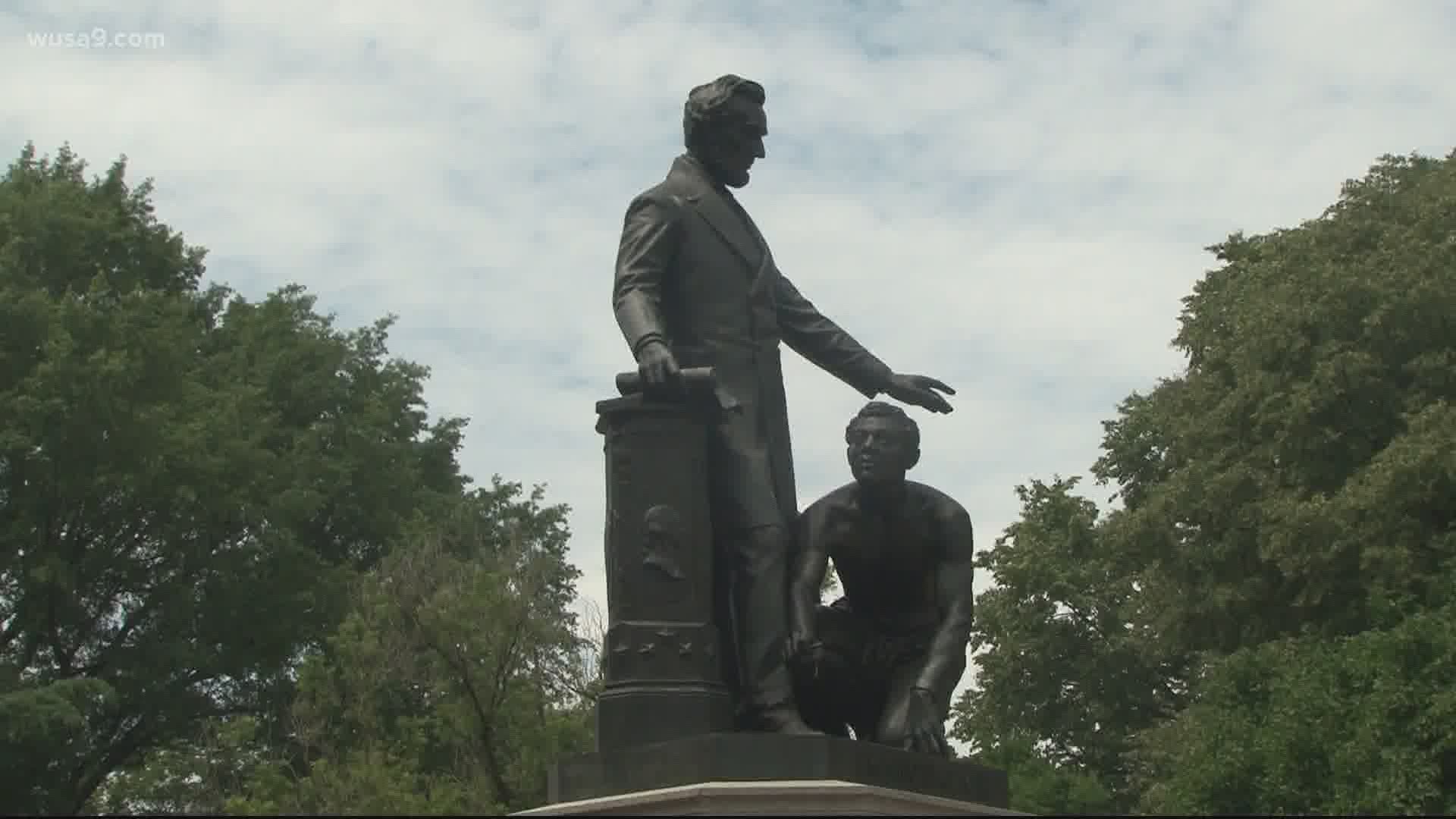 WASHINGTON — As the debate over confederate statues and other monuments continues to heat up around the country and here at home, equal rights advocates are shifting their attention to another controversial statue on Capitol Hill and now a petition to bring it down.

The Emancipation statue, at the center of Lincoln Park, has stood high for more than a century. It depicts President Abraham Lincoln standing over a freed enslaved African American who appears to be kneeling at his feet with broken shackles around his wrists. The statue was erected in 1876 to pay homage to the president, but many have taken issue with its "degrading racial undertones," as described in a new petition.

Marcus Goodwin, a D.C. native and candidate for an at-large seat on the D.C. Council, started an online petition after scaling the statue for an up-close-and-personal view. From his vantage point, it stirred up a lot of thoughts and emotion about racial inequality in America and imagery that depicts African Americans as inferior to others.

“I really got up close to see the Abraham Lincoln Statue in a way that I don’t think many people have ever seen it,” Goodwin said. “ Washington, D.C. is a city African-Americans have contributed to socially, culturally, economically and we need imagery that represents that, not statues and memorials that demean or degrade us.”

“I think we should all move to see better symbols in society that show all people being equal,” he said.

The statue is the result of contributions from freed slaves, who wanted to honor President Lincoln on the 11th anniversary of his death. He was assassinated in 1865.

A former slave named Charlotte Scott used her first five dollars earned in freedom to launch a fundraising campaign for the statue that would honor him, according to the National Park Service (NPS). The funds were collected solely from freed slaves, though the organization controlling the effort and keeping the funds was a white-run, war-relief agency based in St. Louis, according to  NPS.

While Goodwin and others who have protested for its removal feel the statue is demeaning, some have a different interpretation.

Marcia Cole, who portrays Scott as a member of the Female Re-enactors of Distinction (FREED) which is an auxiliary organization of the African American Civil War Museum, is against the statue coming down. She wants to protect the contribution that Scott and other free slaves made.

“What he’s [freed slave] symbolizing to me and others is that he’s indicating his previous position of servitude, but he’s rising out of that,” said Cole about her interpretation of the statue. “ I would hate to see this amended or torn down because Ms. Charlotte worked real hard to see this put up there.”

In a tweet, Congresswoman Eleanor Holmes Norton said she is introducing a bill to move the statue to a museum.

A similar petition has been circulating in Boston, where a replica of the Emancipation Memorial stands. It was started by an African-American man named Tory Bullock and has more than 12,000 signatures, exceeding his goal. According to the petition, a public hearing is now scheduled for June 30 from  5 p.m. to 7 p.m. as city leaders consider its removal.

Goodwin hopes to  get at least 5,000 signatures by Friday in hopes that Mayor Bowser and the D.C. Council will denounce the statue and ask the National Park Service to take it down.

As for what happens next, should the statue come down? Goodwin said it should be up to the people.

RELATED: MAP: Statues, roads and buildings named for the Confederacy around D.C.