The clinic receives millions of dollars annually in reimbursements for services it provides to children with DDD and AHCCCS coverage. 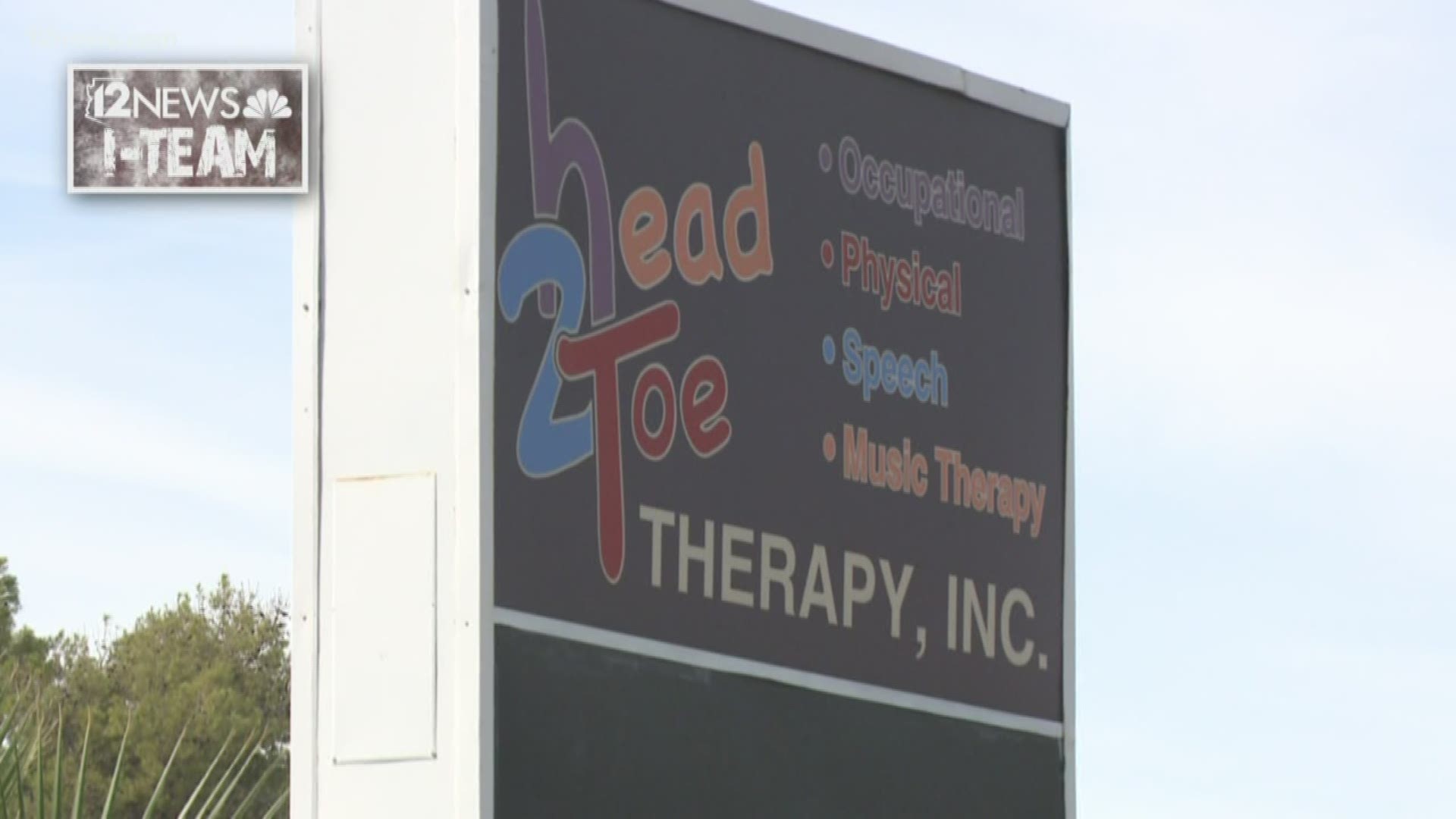 PHOENIX — A spigot of state funds has been temporarily shut off to the Valley’s largest children’s special needs therapy clinic.

The decision comes after more than a year of reporting by 12 News about bounced paychecks, allegations of misspending and nonpayment of therapists.  The clinic’s owner, Bridget O’Brien, also operates Enable Therapy Services.

In response to the most recent report by 12 News earlier this month, Governor Doug Ducey announced his office would working with state agencies to take “appropriate action.”

A spokesperson representing the Department of Economic Services said DES made the decision Friday.

“As a result of the suspension, the DES Division of Developmental Disabilities is proactively reaching out to members to transition people currently receiving services from Head to Toe Therapy to other service providers to ensure there are no interruptions to services and members are getting the care they need,” Chris Minnick said on behalf of DES.

Meanwhile, O’Brien claims via an attorney that all therapists have been paid.

“Presently, H2T (Head to Toe) asserts that every single independent contractor therapist who has worked with H2T has been paid in full,” wrote Attorney Olen Lenets in an email, on behalf of Head To Toe’s owner, Bridget O’Brien.

However, Lenets added that therapists claiming to be missing payment from Head To Toe are encouraged to reach out to the clinic for a resolution.

In response to the suspension, Head To Toe issued the following statement:

“Less than half of H2T’s patients use state funding for treatment. H2T will continue serving all patients, regardless of treatment payment source, as it assists and complies with the state investigation. While H2T’s funding may be suspended, its contract is not, and H2T intends to honor its duty of continued care. H2T hopes to clear up any misunderstanding or false reporting tied to this investigation and continue serving its patients, with restored state funding, shortly. For the time being H2T will continue to see state-funded patients at a loss, knowing full well that any services rendered while the investigation is ongoing may not be reimbursed.”

The large children’s therapy clinic is located near 7th Street and Missouri Avenue in Phoenix. It provides in-home services as well. As “a qualified vendor” of the state, it receives millions of dollars annually in reimbursements for services it provides to children with DDD and AHCCCS coverage.

“Head To Toe is a bully company who holds pay for work you have already done, saying you must jump over hoops to acquire that money you have already worked for,” said Hannah Mueller, an Occupational Therapy Assistant.

Mueller said she applied at Enable Therapy in early 2019 and during the application process, realized she was going to be doing contract work for Head To Toe.

According to Mueller, while working for the company, she filled out invoices for Enable Therapy and was paid by Head To Toe.  In June and July, she stopped receiving checks for her work.

“I have finally received that pay (in November) from them after having to reach out to the wage board,” Mueller said in a November 11th email to 12 News.

Many contractors who still say they are currently owed money asked not to be identified out of fear they will never be paid.

The clinic has contracted with more than 200 therapists Valley-wide who work as independent contractors, O’Brien told 12 News last year.  O’Brien has provided several reasons for why she wasn’t paying therapists in the past, including a Cancer diagnosis, computer system problems, bad loans, financial mismanagement, and incomplete documentation by therapists.

Court records show O’Brien has been accused of breach of contract by other contractors who aren’t therapists. Last month Head to Toe settled a lawsuit for $80,000. O’Brien was lent the money to buy the clinic’s property in 2011. The settlement calls for O’Brien to make a series of payments to the lender over the next year.

According to the April 2017 vehicle sales contract, Head To Toe Therapy purchased the truck for $81,564. O’Brien entered an extended financing agreement for the truck over 72 months for a total projected sales price of $113,825, records show.

The truck was auctioned, leaving O’Brien with a principal deficiency of $21,774.

When asked if the truck was purchased with reimbursement funds from the state, O’Brien said no, through her attorney.

She said the truck was used for company purposes only.

“The truck was stored on-site at the H2T office and only used for company purposes,” Lenets said.