Why Sinema said 'no,' then 'yes,' on Trump tax cut

The records of Democratic Congresswoman Kyrsten Sinema and Republican Congresswoman Martha McSally indicate how each would vote as a member of the U.S. Senate 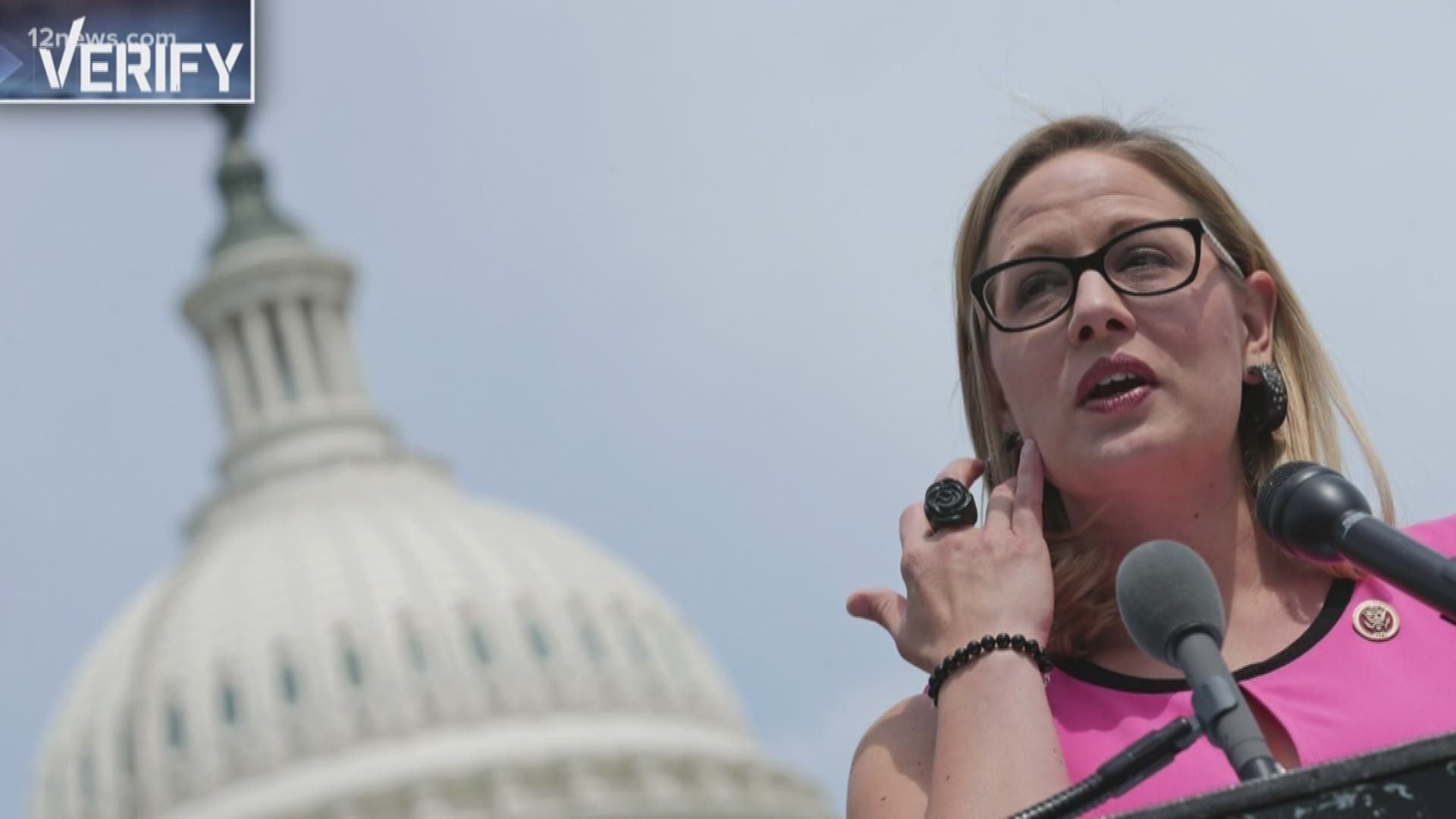 We're taking a break from the deluge of TV ads in Arizona's U.S. Senate race for a closer look at the voting records of the candidates - Democratic Congresswoman Kyrsten Sinema of Phoenix and Republican Congresswoman Martha McSally of Tucson.

Their records might provide a glimpse of how they would vote as a member of the U.S. Senate.

We're starting with Sinema, and two votes she has cast in the past 11 months on President Donald Trump's tax cuts.

Sinema ranks fourth among all House Democrats for voting in line with President Trump's positions.

On the tax cuts, she split the difference: a "no" vote last year on the initial tax cut package, and a "yes" vote last week on a tax-cut extension.

Last November, Sinema joined all her fellow Democrats in the House of Representatives to oppose the Republican tax-cut package.

She issued a sweeping condemnation of the bill. Here's a sample:

"This bill is a bad deal for Arizona. It explodes the federal debt, likely raises taxes on many small businesses, and makes it harder for Arizona families to get ahead. I oppose this bill because it does not reflect the values and priorities of hardworking Arizonans."

"I would like to support bipartisan tax reform that upholds our values, but tax cuts are not tax reform. Passing unbalanced tax cuts for short-term political gain is not in the best interest of Arizona or the American people."

But when the U.S. House of Representatives voted last week to make the tax cuts for individuals permanent, starting in 2025, Sinema switched sides.

She was one of only three Democrats to side with the Republican majority. One of those Democrats was Congresswoman Jacky Rosen of Nevada, who is also locked in a tight U.S. Senate race.

Here's what Sinema told me Wednesday when I asked her about the switch from a "no" to a "yes":

"The bill that Congress passed recently extended those two provisions, my chief concerns, which is why I voted yes."

Back in November, Sinema's concerns about the middle-class impact included the loss of tax breaks for education, health care and housing. Why was she no longer concerned about the impact on the middle class?

"The permanency of the tax cuts will help the middle class. My concern was that if you give middle-class families tax cuts for a few years and then take them away, that doesn't help solve their long-term challenges."

According to the non-partisan Tax Policy Center, the tax bill extension "is an enormous budget-buster that primarily benefits high-income households."

Sinema backed the extension despite her own warning a year ago about the government borrowing more and more money to pay for the tax cuts: "The House bill increases the debt by $1.5 trillion."

That warning turned out to be accurate.

The Congressional Budget Office projected this summer that the tax cuts would spawn a historic level of debt, equal to the size of the U.S. economy -- a level last seen during World War II.

In the end, Sinema's vote to make the tax cuts permanent might not matter. According to several reports, the Senate will let the House bill die.