Why does this Starbucks mug call Arizona 'the Sand Hill State'?

Apparently, the Grand Canyon State is also sometimes called, "the Sand Hill State," but why? 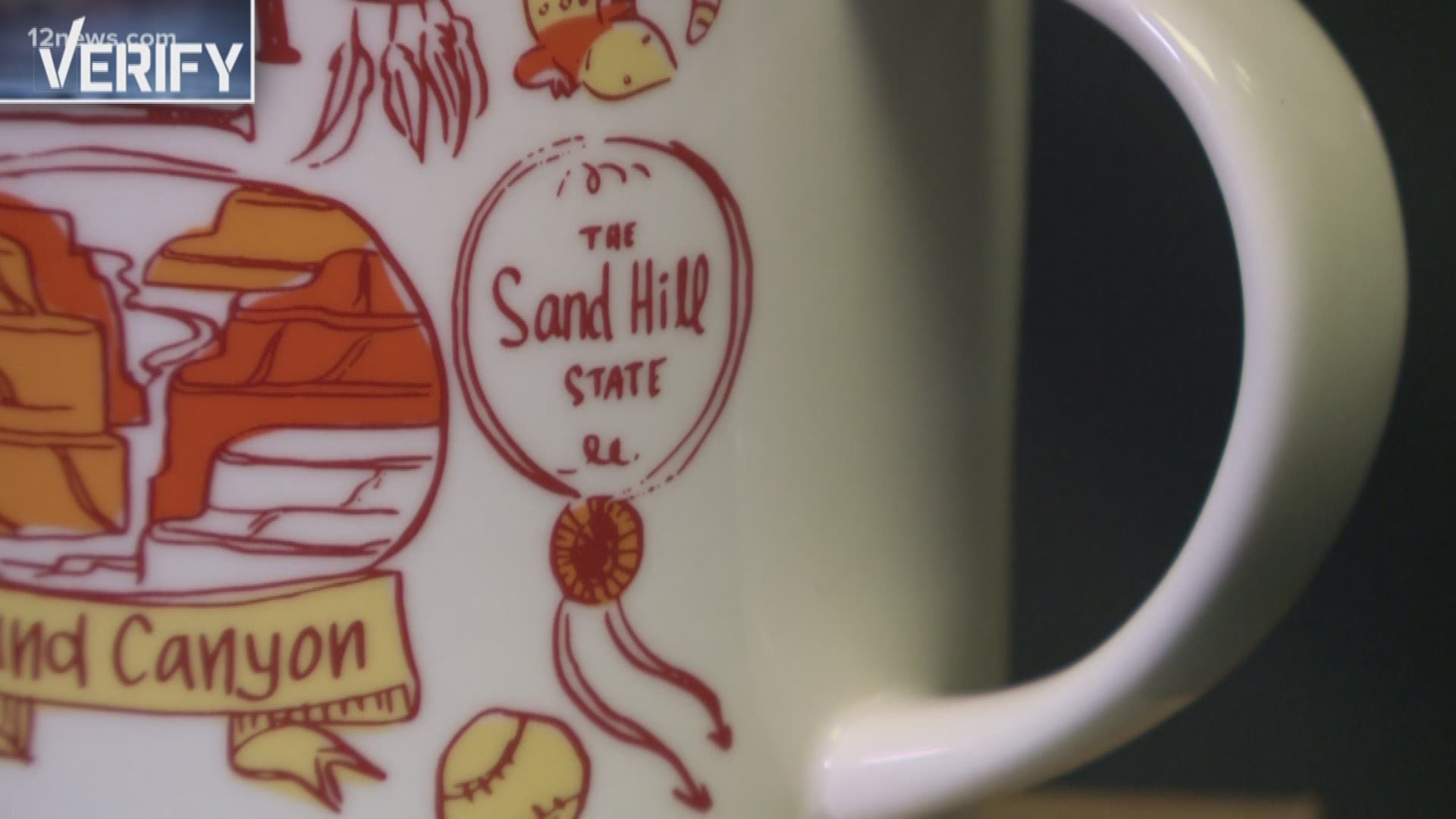 PHOENIX - Arizona is a state known for many things – gorgeous sunsets, saguaros, copper, the Grand Canyon … and sand hills?

At least, that’s what our "Been There" Starbucks mug says. The mug series, released in March, features different designs for each of the 50 states.

Starbucks said its artist was "inspired by Arizona's nickname of 'The Sand Hill State.'"

So where did the nickname come from?

“Yep, Sand Hills State is one of our nicknames, and for the life of me, I can’t figure out why or where it came from,” Arizona’s official state historian Marshall Trimble said in an email when we asked about the sobriquet’s origin.

Apparently, nobody else can figure out where it came from either. The best we have are educated guesses, like the one in "the Encyclopedia of Arizona," by Nancy Capace:

“Arizona is designated as the Sand Hill State, perhaps, because the Mexican Cordilleras divided the State diagonally into two regions, and because of the desert-like appearance of many regions of the State."

Another clue can be found in "A Book of Nicknames," by John Goff, published in 1892. According to the book, Arizonans were sometimes called "Sand Cutters" by people from outside of the state.

So maybe it's just people from out-of-state assuming "desert" means lots of sand dunes. Though there are some impressive sand dunes west of Yuma, you don't really see sand hills throughout much of the state.

Here's a more accurate description of our topography from "The New International Encyclopedia, Volume 2":

"The whole State, however, is mountainous in the form of short, isolated ranges having a general northwest-southwest trend, which are abrupt sterile, and gashed by deep canyons and dry watercourses."

Our official nickname, the Grand Canyon State, didn’t actually become official until 2011, after the passage of House Bill 2447.

Trimble said a schoolgirl in California had written to him wanting to know the state’s official nickname. After some research, Trimble found it wasn’t yet official. The bill was signed on Arizona’s birthday, February 14.

Here are some other interesting Arizona nicknames:

Apache State - A great number of the Apache people originally inhabited the territory, and they fought for 10 years to keep European settlers from encroaching on their land.

Baby State - Arizona was the last of the contiguous 48 states to be admitted to the union in 1912. Alaska and Hawaii were not admitted until 1959.

Copper State - Arizona has produced more copper than any state in the union.

Valentine State – Arizona gained statehood in 1912 on February 14, which is also Valentine’s Day.