Who are the women on death row in Arizona?

Arizona has three women on death row, and has served the death penalty to one woman. 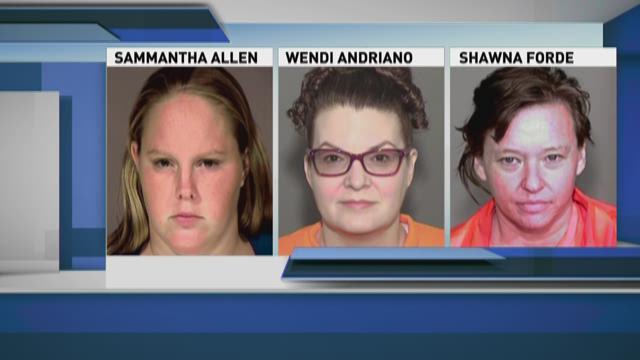 There are currently three women on death row in Arizona, and one woman who was executed.

Sammantha Allen was sentenced to death August in the killing of her 10-year-old cousin, Ame Deal. Her husband, John Allen, was also sentenced to death on Thursday, making Sammantha and John the first couple in the state to be sent to death row, according to the Arizona Department of Corrections.

Allen is the fourth woman to be sentenced to death in Arizona. She joins Wendi Andriano and Shawna Forde, who are currently on death row. The Arizona State Prison Complex - Perryville is where female death row inmates are housed.

Eva Dugan was sentenced to death for the killing of a Tucson rancher.

Dugan was found guilty of killing Arthur Mathis, a rancher near Tucson.

Dugan grew up a frontierswoman, floating from town to town for work. She met Mathis in Tucson, and he hired her immediately to work as his housekeeper. The Prescott Courier from May 1979 implies the relationship was a kind of arrangement.

A young man named Jack moved in with Mathis and Dugan, then Mathis was never seen again. Dugan and Jack skipped town.

Months later, a man bought some land near the Mathis ranch. He was driving stakes for a tent when he discovered a shallow grave. The red-headed remains were identified as Arthur Mathis.

Dugan was sentenced to death.

"If I was a flapper with pretty legs, I never would have been convicted and given the death penalty," she reportedly said.

Dugan was hanged February 21, 1930. When the gallows trap sprang, her body fell and she was decapitated.

Wendi Andriano, sentenced to death in the killing of her husband.

Andriano was found guilty of first-degree murder in the killing of her husband. A jury found Adriano had killed her husband, Joe Andriano, by beating him with a barstool and slitting his throat.

Joe Andriano had been diagnosed with a terminal illness when Wendi Andriano was pregnant with their second child.

The night of Oct. 7, 2000, Wendi called 911 in the early-morning hours to get Joe medical help. She called a coworker in her apartment complex to help watch the kids. The coworker said he saw Joe lying on the floor in the living room. He was in the fetal position, vomiting and weak.

When paramedics arrived, Wendi sent them away, saying Joe was dying of cancer and had a do-not-resuscitate order. Paramedics left.

Andriano called 911 again at 3:39 a.m. Paramedics found Andriano in a bloody shirt, and Joe dead on the floor. There was a bloody barstool nearby. Joe had fatal head injuries and a stab wound to his neck.

The medical examiner determined Joe had been hit on the head at least 23 times. He also had sodium azide, a pesticide, in his system.

Andriano claimed she had tried to help Joe take his own life, and when the assisted suicide attempt failed, the two fought. Andriano said she hit Joe with a barstool in self defense.

Andriano was sentenced to death. She is appealing. She filed a federal habeas corpus appeal in April 2016.

Shawna Forde was sentenced to death for her role in the deaths of a father and daughter.

Forde was found guilty in the first-degree murders of Raul and Brisenia Flores.

Forde, a rogue Minutemen leader on the Arizona border, burst into the Flores home in Arivaca, Arizona, in the middle of the night along with Jason Eugene Bush and Albert Robert Gaxiola.

Dressed in camouflage, Forde, Bush and Gaxiola claimed to be agents looking for fugitives. They took jewelry, then shot Raul Flores, his daughter, 9-year-old Brisenia, and his wife, Gina Gonzales.

Gonzales survived the attack by pretending to be dead. Gonzales was calling 911 when the intruders came back. Gonzales fired a shotgun at them, wounding Bush.

Evidence showed Forde planned the attack, though Bush pulled the trigger. Both Forde and Bush were sentenced to death.

Allen was found guilty in the killing of 10-year-old Ame Deal.

Sammantha and John Allen lived in a home near Broadway Road at 35th Avenue with Ame Deal and many others.

Deal died after she was locked in a plastic box that was left outside overnight in the Arizona summer. Deal was being punished for taking a popsicle. She died of suffocation and heat, according to court documents.