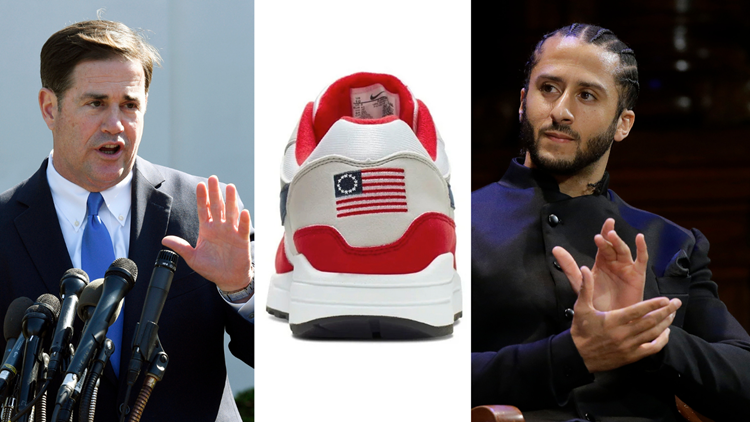 What is the controversy over the Betsy Ross flag between Doug Ducey, Nike and Colin Kaepernick?

PHOENIX - The Nike Air Max 1 Quick Strike Fourth of July, a special edition shoe meant to help celebrate America's upcoming birthday, never saw store shelves after the company pulled the shoe that was supposed to be released this week.

A Wall Street Journal report put out Monday night said Nike's decision to pull the shoe had to do with former NFL quarterback and current activist Colin Kaepernick telling the company they shouldn't sell the shoe because it contains a symbol that he and others find offensive.

The heel of the shoe showcases a flag with 13 stars, which is the first flag of the United States of America designed in the 1770s.

The flag, the design of which is commonly attributed to Philadelphia seamstress Betsy Ross, is considered offensive to those who believe it is a symbol of exclusion and hate, as the flag has 13 stars representing the first 13 states in America, and slavery was legal in all states at the time the flag was designed.

Retweets on the "Know Your Rights Camp" Twitter account, a campaign founded by Kaepernick, shows this is one of the problems some see with the flag.

The flag that shows only 13 states has also been known to be displayed by white supremacy groups.

A 2016 story out of Grand Rapids, Mich., ended with a school superintendent apologizing after high school students displayed a Betsy Ross flag along with a Trump flag at a football game against a school that had a high percentage of minority students and parents.

That story started a national conversation about whether the Betsy Ross flag had anything to do with exclusion and hate.

However, the Betsy Ross flag is not part of a database by the Anti-Defamation League, which contains more than 150 so-called hate symbols.

While Nike has not publicly said it was Kaepernick that swayed them to pull the shoe, the "Know Your Rights Camp" Twitter account, tweeted this, sharing an article that said Nike pulled the shoe after the activist raised concerns:

"NIKE made the decision to halt distribution of the Air Max 1 Quick Strike Fourth of July based on concerns that it could unintentionally offend and detract from the nation’s patriotic holiday," the company said in a statement sent to 12 News.

On Monday, Nike reached an agreement with the City of Goodyear to build a manufacturing plant in the city that would bring at least 500 new jobs.

Following the news of Nike pulling the Betsy Ross flag shoes, Arizona Gov. Doug Ducey took to Twitter and Facebook to shame the company for pulling the shoes, saying "words cannot express my disappointment" in Nike's "terrible decision" to stop the sale of the so-called "Besty Ross Flag" sneaker.

Ducey said he has told the Arizona Commerce Authority to withdraw "all financial incentive dollars" that the state was providing to Nike.

The Arizona Commerce Authority released a statement Tuesday saying it was withdrawing an up to $1 million grant offered by its Competes Fund at the direction of the governor.