State of Emergency in Flagstaff after snowiest day on record

By 5 p.m. Thursday, Flagstaff had surpassed it's all-time daily snowfall record of 31 inches set in 1915. 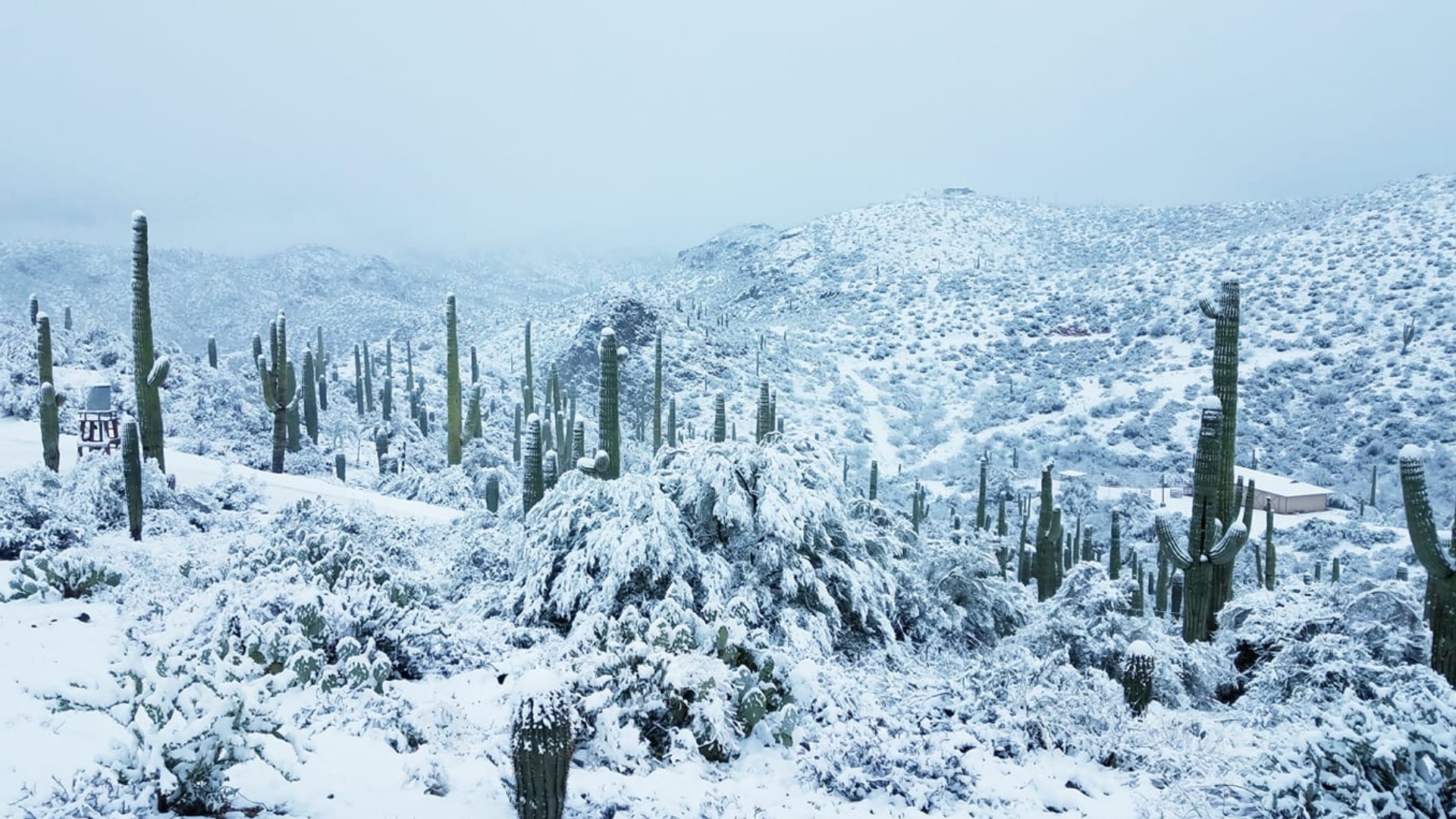 What will likely be a storm seen "once in a decade" parked itself over the entire state of Arizona Thursday and will stay through Friday, dumping heavy snow and plenty of rain.

Coconino County and the City of Flagstaff both issued a State of Emergency Thursday due to the severe winter weather.

TIMELINE: Here's when and where you can expect the heaviest snow, rain from Arizona's big winter storm

LIST: Cancellations, school closures due to the Arizona winter storm

Weather officials said earlier in the week that they were expecting some of the biggest snowfall totals in two years and are warning Arizonans to delay travel for the next few days.

READ: Here's why you shouldn't drive on I-17 between Phoenix and Flagstaff Thursday and Friday

Thursday became the snowiest day on record by 5 p.m. for Flagstaff. By the end of the day, Flagstaff had recorded 35.9 inches.

The Red Cross Shelter at the Pine Community Center has been relocated to Pine Fire Station #41 at 6198 W. Hardscrabble Mesa Rd. The shelters in Kingman and Payson are still open and accepting guests. Those addresses are below:

State Route 87 is open between the Valley and just south of Payson.

I-8 westbound is closed at milepost 4, near East Avenue.

U.S. 60 is closed in both directions from State Route 73 to Globe.

State Route 177 is closed between Superior and Hayden due to weather.

State Route 77 is closed between Globe and Winkleman due to the winter storm.

The City of Flagstaff declared a state of emergency due to the significant winter storm. All non-essential city services and facilities will be closed Feb. 22. Court services, public works street operations and the city’s fire and police departments will remain open.

The rain total at Sky Harbor is now just under a half-inch as rain continues to accumulate in the Valley.

I-40 eastbound at State Route 95 has reopened, but ADOT discourages motorists from traveling on the road during the winter storm.

NWS says 33.1 inches of snow has been reported at the Flagstaff Airport for this storm. This includes a new all-time daily record of 31.6 inches of snow, making it the snowiest day in Flagstaff on record. The previous record was 31 inches set in 1915.

A flood advisory is now in effect for much of Maricopa County until 11:00 p.m.

The American Red Cross has opened a shelter in Payson. This is the third emergency shelter across the state. There are already shelters in Kingman and Pine.

All city offices in Kingman are closed Friday. There will also be no trash pickup. Officials are urging Kingman residents to stay inside and off the roads.

Coconino County has declared a state of emergency due to the storm.

SR 89A is closed between Sedona and Flagstaff, ADOT says.

Lanes are open on northbound I-17 at Glendale Avenue and Cactus Road, ADOT says.

ADOT says there are a couple of crashes blocking lanes on northbound I-17.

A crash is blocking the HOV lane just north of Glendale Avenue.

And a crash is blocking the right lane approaching Cactus Road.

There is a crash blocking the left lane at milepost 301, just north of State Route 179, ADOT says.

As rain is starting to pick up in the Valley, thunderstorms are possible within the next few hours across the Phoenix area.

ADOT continues to remind drivers of the closed highways across Arizona.

The following highways are currently closed:

Weather officials are again discouraging travel in the High country for the next four hours as 12 inches of new snow could accumulate. NWS says heavy snowfall of about 3 inches per hour will continue along the Mogollon Rim from Flagstaff to Show Low.

Northbound I-17 is closed north of Camp Verde due to the storm. Traffic will be diverted onto SR 179.

The Red Cross has opened a shelter for the Strawberry/Pine communities at the Pine Community Center at 3886 North Highway 87 in Pine, Ariz. This is in addition to the Red Cross shelter in Kingman that opened earlier.

Prescott officials are discouraging people from traveling on the roadways. Despite that warning and the mayor declaring an emergency earlier this morning, some southern Arizona high school basketball teams are en route to Prescott for the AIA championship tournament starting tomorrow.

The snow is picking up in northern Arizona with no signs of it letting up. According to NWS, here are current snowfall totals:

ADOT says these are the major highway restrictions across Arizona:

Flagstaff Unified School District just announced a snow day for Friday after 23.8 inches of snow fell in the area. Snow continues to fall and is not letting up.

The Phoenix Fire Department says a portion of a roof was blown off a Phoenix home near 37th Avenue and Filmore Street by strong winds. The roof landed in the neighbor's yard, officials say. The house was unoccupied at the time and no injuries were reported.

The storm has already dropped feet of snow in the High Country and some rain and graupel in the Valley. Check out the photos and video below.

1 / 33
Jesse Curlee / Special to 12 News
Scottsdale was blanketed with several inches of snow as a massive winter storm dumped heavy snow and rain across Arizona Feb. 21 -22, 2019. 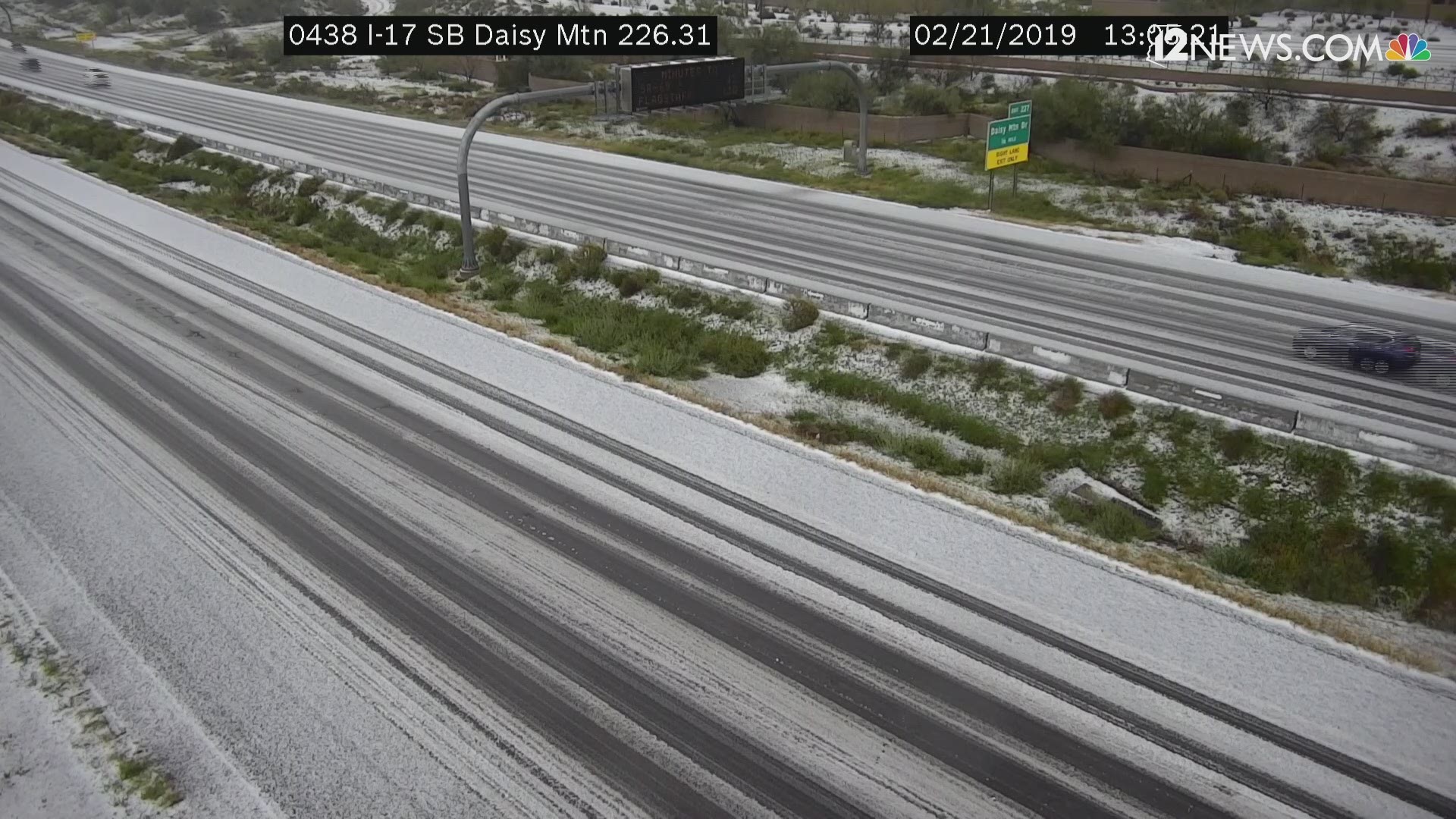 The National Weather Service in Phoenix has issued a flood advisory until 3:30 p.m. for northern parts of Maricopa County. The advisory covers Anthem to Glendale and Lake Pleasant to Fountain Hills.

Hail has been reported in areas of the north and west Valley.

The Arizona Department of Public Safety says troopers across northern Arizona have responded to 152 stuck vehicle and slide-offs, and 28 crashes since 3 a.m.

NWS Flagstaff says the Flagstaff Airport had recorded 23.8 inches of snow since last night, 22.3 inches of that fell on Thursday.

That number breaks the daily record for Flagstaff snowfall. The previous record was 10 inches set back in 1944.

The all-time daily record for snowfall in Flagstaff is 31 inches set in 1915.

A strong storm cell has popped up near Tonopah.

ADOT says SR 89A is closed just outside of Flagstaff due to weather conditions.

A significant weather advisory has been issued for Maricopa County until 12:30 p.m.

NWS Phoenix says storms over the West Valley are packing heavier rains and even lightning near Tonopah.

SR 87 is closed from Payson to Winslow due to snow and ice.

NWS Flagstaff says its Bellemont office has received 14.3 inches of snow this morning.

Prescott Mayor Gren Mengarelli declared an emergency for the city as the storm is expected to drop up to two feet of snow in the area.

According to a release, the proclamation allows Prescott to  "seek reimbursement if and when a State or Federal Emergency or Disaster Declaration is made."

Cottonwood announced it closed all city offices due to the weather.

Flagstaff Pulliam Airport Director Barney Helmick says the airport's only runway closed around 10:30 a.m. Thursday because the visibility level is "zero." He says he has no idea when the runway will reopen.

American Airlines has canceled its flight to and from Flagstaff.

The American Red Cross has opened a shelter at the Kingman Community Center. The shelter, according to Red Cross, is offering blankets, cots, snacks and a warm place to hang out during the storm.

The pool at the Canyon 66 Restaurant and Lounge in Kingman is looking a little cold.

I-17 appears to be buried in snow just a few miles south of Flagstaff.

Morning rainfall totals show measurable rain has been recorded in several areas around the Valley.

A heavy band of snow, which is producing 3 to 4 inches of snow per hour, is headed up I-17 and will push into Kachina Village and Flagstaff soon, NWS Flagstaff says.

Snow has started to fall in Globe, according to NWS Phoenix.

The freeway sign on I-17 at Sunset Point is covered in snow.

Phoenix is up to 0.12 inches of rain and counting, according to NWS Phoenix.

A 12 News viewer snapped a photo of snow in Carefree in the Desert Mountain area.

While another 12 News viewer says Kingman has seen a foot of snow with more falling.

NWS Flagstaff says over 1 foot of snow has been measured in the Flagstaff area with 14 inches in Kachina Village.

"Again, this storm is just getting started and there is plenty more on the way," NWS Flagstaff tweeted.

Rain is spreading across the Valley with downtown Phoenix looking pretty soggy.

According to NWS Phoenix, Sky Harbor has recorded up to 0.05 inches of rain this morning.

Snowfall is picking up in Payson with roughly 3 inches on the ground.

NWS Flagstaff says 8 inches of snow have fallen at the NWS office in Bellemont this morning.

Light and scattered to moderate rain reported around the Valley. Snow reported not too far north of Phoenix.

ADOT says it's been a wet commute for mostly the drivers in the east and north Valley.

NWS Phoenix says its "best to keep all travels close to the Valley today."

About .04 - .05 inches of rain have fallen around the Valley so far as snow appears to be really coming down at Sunset Point.

And just like that Payson is back to the fine snow falling. Team 12's Will Pitts says the town is way under what everyone thought it would be at this point in the morning. Payson has received just about 2 inches of snow so far.

Snow has started to come down a little harder in Payson. 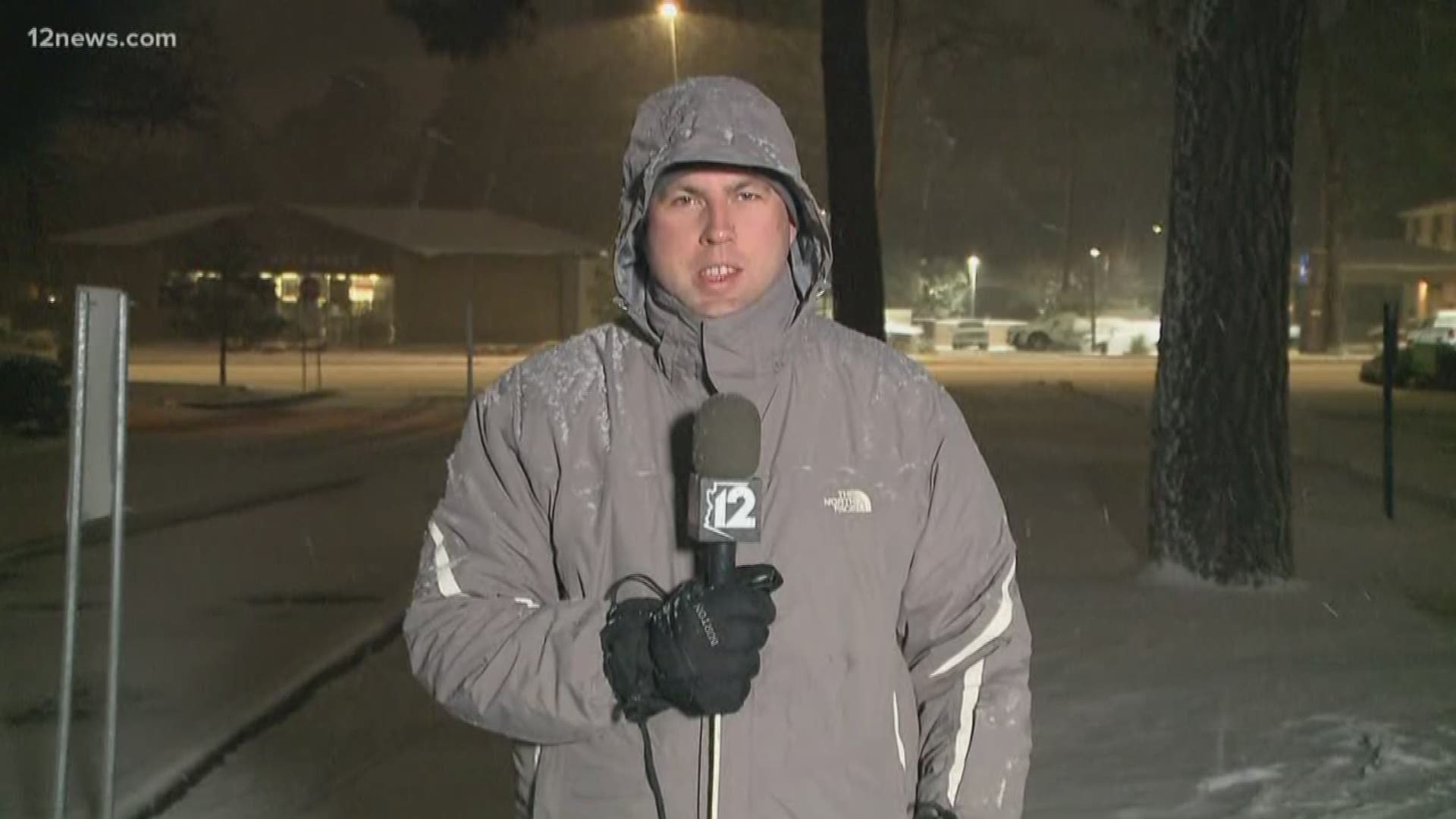 The roads in Flagstaff remain slick as snow continues to fall hard near downtown.

ADOT says I-40 is closed at Stockton Hill Road near Kingman. The department is reporting 7 inches of snow on the highway.

US 93 is also closed in both directions at Coyote Pass.

Payson is expected to be one of the hardest hit areas of this storm. The town could see nearly three feet of snow.

Team 12's Will Pitts says it's been snowing in Payson for a few hours, but it's coming down as a very fine, dry snow.

He says there's only about two inches of snow on the ground at the moment. 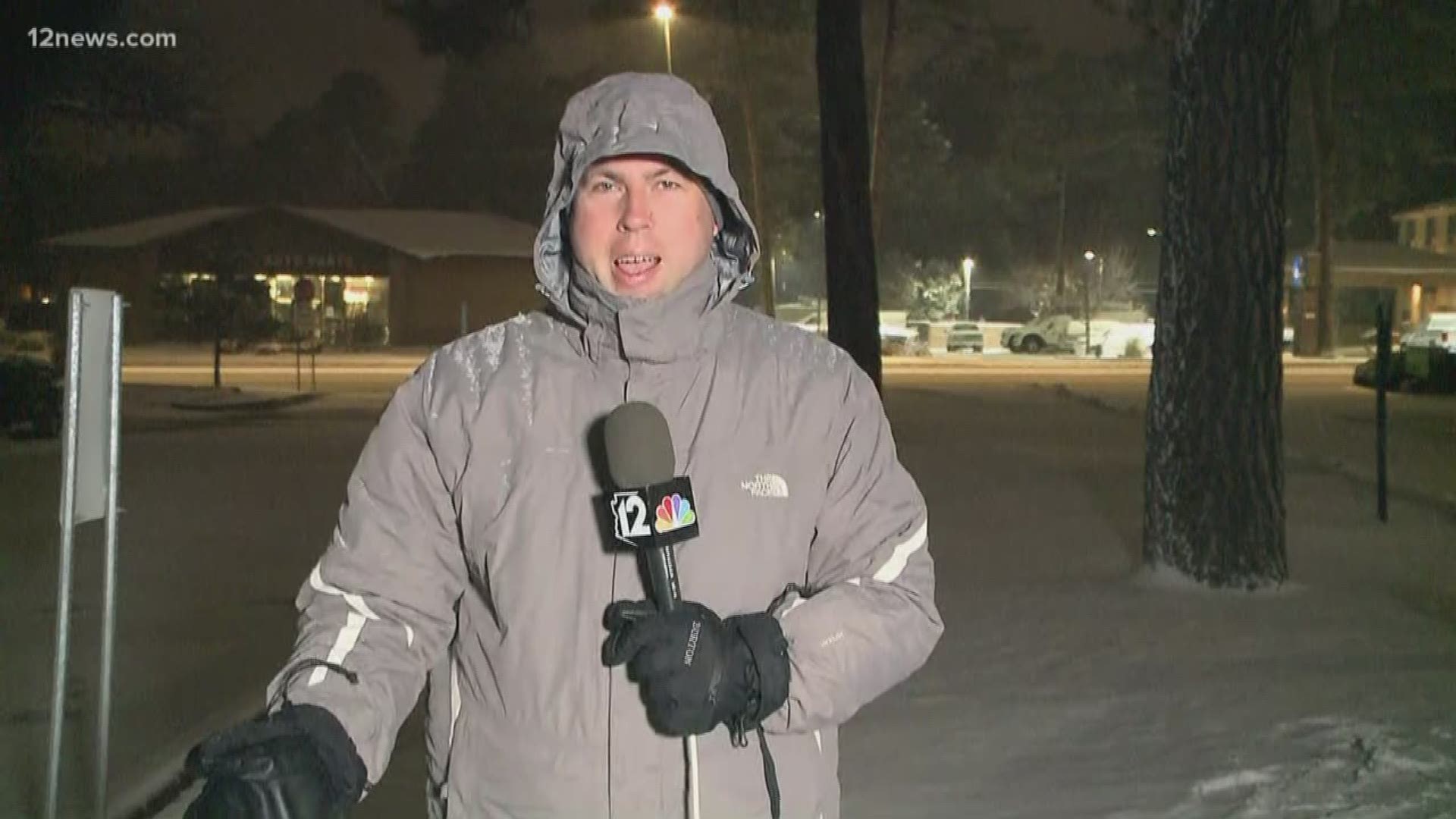 She says the roads around Flagstaff are slick.

"Snow plows are busy getting roadways cleared but the snow keeps piling on out here in downtown Flagstaff," she tweeted.

By 5 a.m., the rain showers were light, according to the National Weather Service Phoenix, but are expected to increase throughout the morning.

Flagstaff could receive just over two feet of snow by the end of this storm.

By the start of Thursday, snow was already coming down in places like Flagstaff.