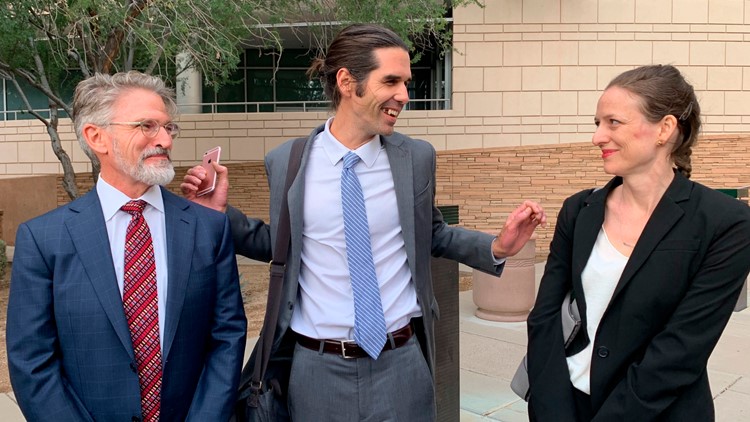 Religious liberty is often a high priority for conservatives, but last week’s acquittal of an Arizona man prosecuted for aiding migrants along the U.S.-Mexico border is spotlighting the ability of religious freedom law to shield people of faith regardless of political ideology.

The case of Scott Warren, a college instructor and volunteer with a humanitarian group that helps migrants, gained nationwide notice as he challenged what he called the government’s “attempt to criminalize basic human kindness.”

Much of that attention focused on Warren’s acquittal on felony charges of harboring. But he was also acquitted Wednesday of a separate misdemeanor charge after his lawyers argued that his religious beliefs motivated him to leave water for migrants crossing through a desert wilderness area.

The same 1993 religious freedom law invoked to acquit Warren of a misdemeanor was at the heart of the Supreme Court decision that gave the arts and crafts chain Hobby Lobby an exemption from the Affordable Care Act’s birth control coverage requirement.

While religious liberty is more commonly associated with conservatives, the law’s successful use in Warren’s case could represent a step forward for claims by more left-leaning believers.

“By and large, what we’ve seen from the federal judiciary is they’re much more willing to grant conservative, faith-based religious liberty claims and have a kind of skepticism” of more liberal claims, said Columbia University law professor Katherine Franke, who founded a think tank at the university that focuses on religious liberty’s ties to other legal rights.

But the judge in Arizona, Franke said, “gave the same dignity and gravity to Dr. Warren’s religious liberty claim as the owners of Hobby Lobby got” in that high-profile 2014 ruling.

The Religious Freedom Restoration Act was passed more than 25 years ago in response to a 1990 Supreme Court ruling against two Native Americans who used a hallucinogenic drug as part of their religious practice.

Yet after starting out as a bipartisan effort to protect religious minorities, the law became a bane for some liberals who feared it could empower discrimination. State-level religious freedom laws debated in Arizona and Indiana sparked political clashes over their potential use against LGBTQ individuals.

The use of the law to protect Warren, whose prosecution came as President Donald Trump’s administration ramped up immigration enforcement, is particularly notable in that context.

“It’s a pretty big deal, I think, to have a federal judge say your humanitarian work with migrants could constitute the exercise of a religious belief and is therefore protected from criminal conviction,” Amy Knight, one of Warren’s lawyers, said in an interview.

Another Warren attorney, Gregory Kuykendall, described the acquittal as “a watershed moment” in the interpretation of the religious freedom law. That’s in part because Warren’s claim rested on being “a person of conscience” rather than adhering to a specific denomination, Kuykendall said.

The nonprofit Warren works with, No More Deaths, is affiliated with the Unitarian Universalist Church. He has received support from other faith-based activists working to help migrants facing deportation or other hardship amid the Trump administration’s immigration enforcement crackdown.

As religiously motivated immigration activism has risen in recent years, a growing number of immigrants at risk for deportation have turned to churches for sanctuary, and some pastors have taken an active role in helping migrants.

One pastor active in that so-called sanctuary movement, which dates to the 1980s, said she was “very encouraged” by the religious freedom law’s successful use in Warren’s case.

“Jesus said, ‘Whatsoever you do to the least of these, you do to me,’” said the Rev. Kaji Dousa, of New York’s Park Avenue Christian Church. “So we firmly believe that if we don’t leave water, if we don’t leave food, we are starving Jesus. If we deport someone, we are deporting Jesus. It’s all connected, from a faith perspective.”

Dousa, who also co-chairs the New Sanctuary Coalition immigrant rights activist group, has filed her own legal challenge citing the 1993 religious freedom law that alleges the government subjected her to surveillance in response to her faith-based immigrant-rights advocacy.

Importantly, Warren’s misdemeanor case didn’t end in a complete victory for his religious freedom defense. He was found guilty of a second misdemeanor charge, driving in a restricted wilderness area, after the judge found that those restrictions didn’t “substantially burden” his faith-based work to aid migrants crossing through the Cabeza Prieta National Wildlife Refuge in southern Arizona.

In order to invoke the 1993 religious freedom law successfully in court, a defendant is required to demonstrate that the actions at issue are rooted in sincerely held religious beliefs that face a substantial burden by the government. If that condition is met, the government must prove it’s using the “least restrictive” path to achieve its interest.

Warren could appeal his misdemeanor conviction following his sentencing, which is slated for February.

“We have great respect for religious freedom rights and have no interest in prosecuting people for providing life-saving aid to those in genuine acute distress,” Michael Bailey, U.S. attorney for Arizona, said in an emailed statement in response to a request for comment. “But we have a crisis on our southern border, and when one’s true intention is to help others gain successful illegal entry into this country, we can and must vigorously prosecute.”

Luke Goodrich, vice president of the Becket Fund for Religious Liberty, a nonprofit that represented Hobby Lobby in 2014, said that Warren’s misdemeanor acquittal was rightly decided and that there’s room for the activist to appeal the other charge.

Goodrich took issue with the broader perception of the 1993 law as primarily used to protect conservative religious interests, noting that it has also protected religious minorities’ rights on multiple occasions.

The 1993 law became tied to religious objections to contraception following the Hobby Lobby ruling and a 2016 Supreme Court decision in a separate case that challenged the breadth of the faith-based exemption to the Affordable Care Act’s birth control coverage mandate.

But beyond religious freedom laws’ better-known roles in controversies over contraception and anti-LGBTQ discrimination, they also have been used successfully to permit a Muslim prisoner to grow beards and Sikh soldiers to maintain their traditional attire.

Goodrich described Warren’s humanitarianism as politically neutral and said the acquittal shows the religious freedom law “doesn’t have to be a political issue.”

“Sometimes it aligns with a conservative agenda,” Goodrich said. “Many times it lines up with a progressive agenda, and the Warren case perfectly illustrates that in the current climate.”