14-year-old Joshua Cade Richardson is a suspect in the homicide. 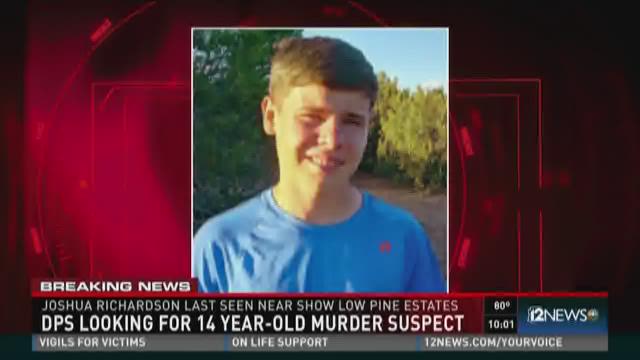 PHOENIX (AP) — A Phoenix-area lawyer said Wednesday he was on the phone with his wife when she was killed during a middle-of-the night encounter with an intruder at the family’s get-away and future retirement home in eastern Arizona.

State police named a 14-year-old boy as a suspect in the killing, and authorities were searching for him.

Ernest Collins Jr. told The Associated Press that his wife, 54-year-old TerriLynne Collins, was killed early Tuesday morning while struggling with the intruder. She had been in the couple’s home and went to a trailer on the property in response to a text for help from the couple’s 18-year-old daughter.

Collins said his wife called him before she went to the trailer and that he was able to hear much of what happened during the fatal encounter in Concho, a rural community about 160 miles (257 kilometers) northeast of Phoenix.

Trooper Kameron Lee, an Arizona Department of Public Safety spokesman, provided the victim’s identity but told the AP that investigators did not want to release additional information on the circumstances of the incident, including how TerriLynne Collins was killed.

Collins, an attorney in Mesa, was distraught at times during a phone interview with the AP.

He said he didn’t immediately understand what was going on when his wife called him after midnight and woke him from a deep sleep. She was apparently walking to the trailer where their daughter and the daughter’s friend were staying at the time.

As he listened to his wife confront the intruder, “I finally realized that she had someone at gunpoint,” Collins said.

He immediately called a neighbor in Concho and asked her to send her husband to the Collins’ property. The neighbor said he should call 911 instead. When Collins did that, he was told deputies were already dispatched and he believed his wife had called 911 before heading for the trailer.

Collins said he then got back on the call from his wife and heard her speak with the intruder, whom he thinks was wearing a ski mask and was armed with a knife.

“I heard my wife telling him ‘you’re just a kid, you’re just a stupid kid and you’re going to ruin your life,’” Collins said.

The conversation went back and forth, with the suspect telling Collins’ wife to shoot him in the head, the husband said.

“I’m yelling as loud as I can through the phone to shoot the (expletive), shoot him,” Collins said.

Collins said his wife yelled at their daughter and her friend to run from the trailer and they did, with the daughter hearing a gunshot as she got outside.

“My wife did not come out of the trailer,” the husband said.

The DPS said he was last seen in the Show Low area of neighboring Navajo County wearing a gray hoodie and blue jeans. He was described as 5-foot-6, 135 pounds with short brown hair and blue eyes. as having acne and a scar on his right forearm. DPS provided no other information on the suspect.

Collins said his wife of nearly 21 years was a devout Christian and “a very devoted mom” to their six children and that she loved the Concho area, where they planned to retire. “Everything that we ever wanted was up there and now it’s just gone.”

He said he didn’t know the suspect.

“I hope they catch this kid,” Collins said. “I hope he resists because I don’t want him to go to prison and get released in four years.”