'I wish he would battle alcoholism as hard as COVID19,' the comment said. Now the mayor faces backlash over a comment he said was taken the wrong way. 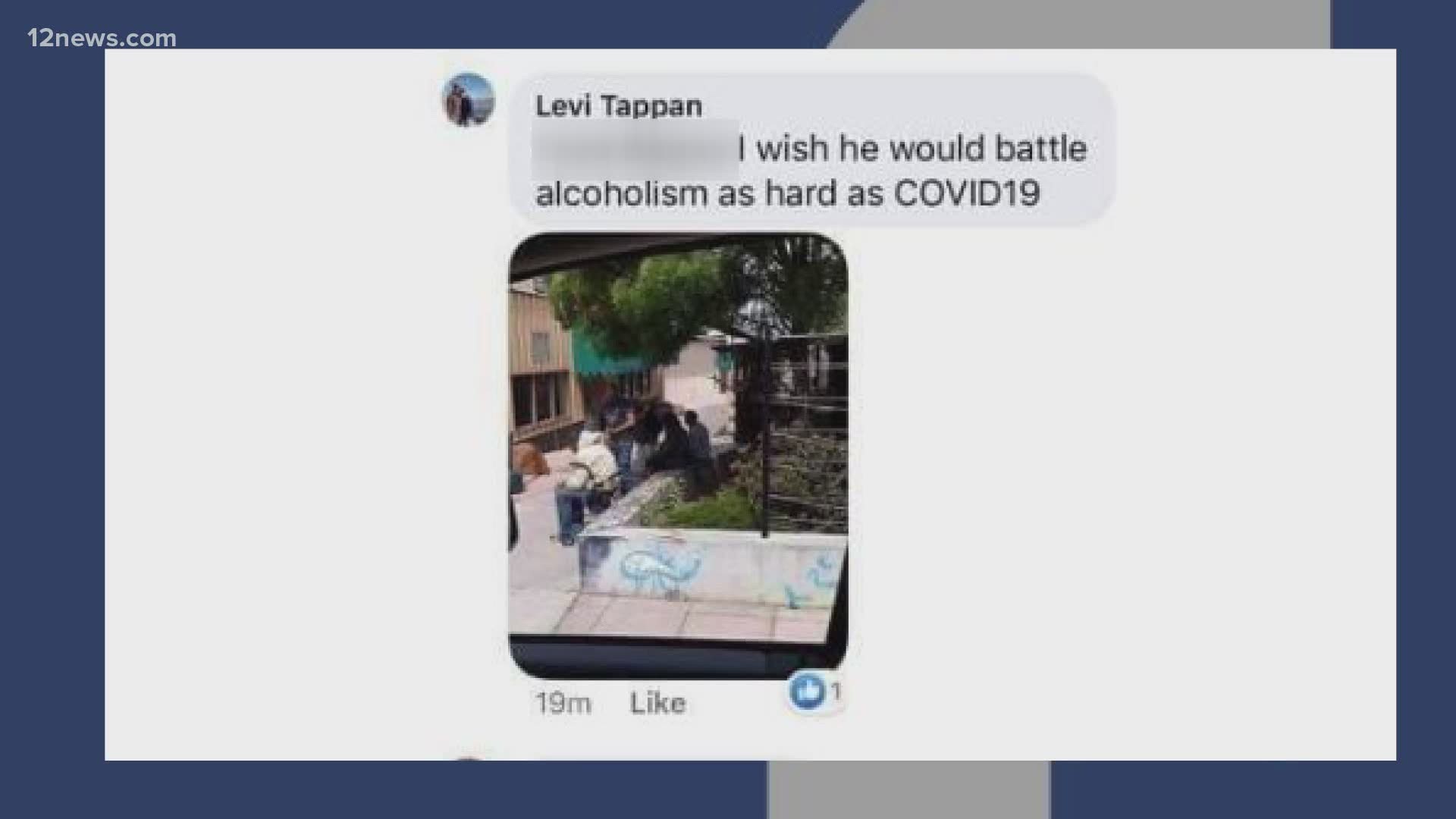 PAGE, Ariz. — The mayor of Page is facing criticism after posting a comment on Facebook that he says was taken the wrong way.

This comes after a letter sent from Page Mayor Levi Tappan to Navajo Nation President Jonathan Nez, asking Nez to work with him to open up Antelope Point Marina, as well as Antelope Canyon and other outdoor Tribal Parks.

The letter was shared on a Page community Facebook page, stating Tappan was asking Nez to work with the city to open up the popular tourist areas.

A comment was left on the post with a photo of Nez outside with a mask on with the caption, "He's busy fighting hard for our people.."

Tappan replied to that comment saying, "I wish [Nez] would battle alcoholism as hard as COVID19," sharing a photo of what appears to be people drinking on a street corner. Their race or ethnicity is not known.

We asked Tappan about why he made the comment and what it meant.

"I didn't say anything about Native Americans, I only talked about alcoholism," Tappan said. "That was not an attack on the Navajo Nation or President Nez. We admire what he's doing for our communities."

"That was not the intent of the comment," Tappan said after we asked for further clarification on whether the comment was directed at Nez and the Navajo Nation.

We also spoke with Nez, who says it's not easy being a leader during these times.

"I think it's just frustration of being a leader," Nez said. "It's not easy being a leader and overseeing thousands of citizens and you may say something out of line and I think that's what happened."

Mayor Tappan has offered help to the Navajo Nation during the coronavirus pandemic, help that President Nez said he would accept.

"We care about our people here in Page and we care about citizens on the reservation," Tappan said.

"Let us focus on the real issue before us, how to help each other out, help stop the spread of COVID-19 in our communities, so that we can all overcome this," Nez said.

As for Mayor Tappan's letter asking President Nez to work with him on opening up those tourist locations, Nez says the Navajo Nation is not ready to focus on.

The virus has gripped the Navajo Nation.

As of Saturday, the nation has had 2,292 cases and 73 deaths. The Navajo Nation has worked with the Army Corps of Engineers, FEMA and other agencies to get additional care and resources. The reservation has also been instituting 57-hour weekend curfews in an effort to slow the spread.

The Navajo Nation and 10 other tribes also filed a lawsuit against the U.S. Secretary of Treasury for more COVID-19 funding.

RELATED: Navajo Nation files lawsuit against US over COVID-19 funding

"The Navajo Nation is not ready to open up the government or open up their lands to anyone, including our visitors," Nez said.

In a release sent out Sunday, Nez and Navajo Nation Vice President Myron Lizer called for Tappan to work with the nation, stating 30% of residents in Page are Navajo.

"In addition, members of the Navajo Nation contribute millions of dollars in revenue each year to businesses and the city that help to provide public safety, EMS personnel, and other essential services for all people," the release said.

"We respectfully request Mayor Tappen and the City Council to re-establish this task force and work with the Navajo Nation to improve relations and identify and resolve the root of the problems," Lizer said in the release. "We have much to gain for all of our people when we work together and so much more to lose if we allow negativity to guide our leadership."

RELATED: Coconino County testing positive at twice the rate as the rest of Arizona, data shows