In April, a Fountain Hills woman was viciously attacked by javelinas while she was walking her dogs. Arizona Game and Fish says it's likely someone in the neighborhood fed the wild animals, which took away their natural fear of humans. 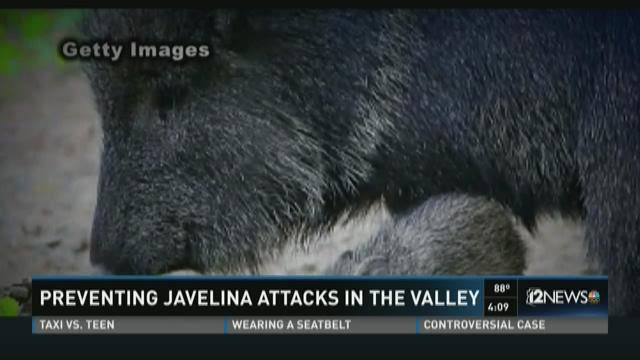 FOUNTAIN HILLS, Ariz. - In April, a Fountain Hills woman was viciously attacked by javelinas while she was walking her dogs. The unprovoked attack happened near East Malta and East Hawk drives.

“She had both dogs with her. They were on short leashes. [The] Dogs didn’t bark; [the] javelina attacked her,” Amy Burnett with Arizona Game and Fish said. “Luckily someone heard her screams. Her husband and a neighbor who was nearby and between the two of them, pulled her away from the javelinas. The neighbor actually had to use his car to bump one of the javelinas off of her.”

The attack left the woman and one of her dogs with serious injuries. She required surgery and a few days in the hospital.

Arizona Game and Fish says it's likely someone in the neighborhood fed the wild animals, which took away their natural fear of humans.

Burnett says the woman and her dogs are recovering at home. As for the javelinas, Game and Fish removed them and they were put down. Their lack of fear made them a danger to the community.

Residents say javelinas are a part of the landscape in Fountain Hills but most try to keep their distance.

“There needs to be a level of separation between man and wildlife. If you don't respect that, there is going to be trouble,” said one resident who didn’t want to give her name. She says she has witnessed some people step across that line.

“They leave out bowls of water or leave that snack and I've even seen people try to feed them and I think that's just ridiculous,” said the woman.

According to Arizona Game and Fish, it's illegal to feed wild animals except for birds and tree squirrels. The desert provides all the food wild animals need and residents need to keep their distance.