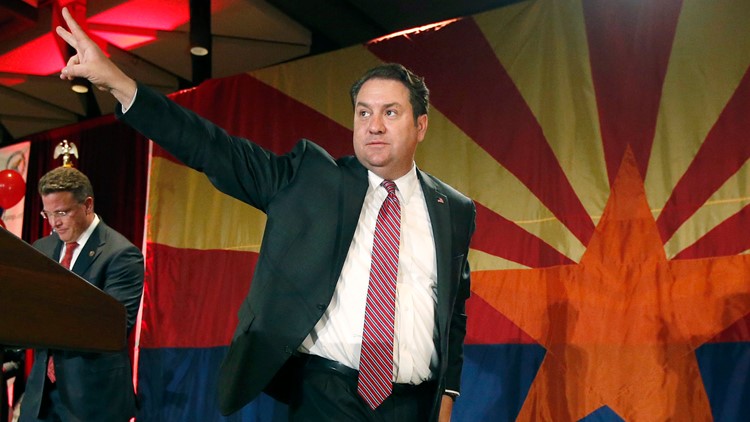 Photo by: AP
FILE - In this Nov. 4, 2014, file photo, Arizona Republican Attorney General Mark Brnovich waves to supporters at the Republican election night party in Phoenix. Brnovich said Friday, July 26, 2019, that Arizona is poised to resume executions after a five-year hiatus brought on by an execution that critics said was botched, a subsequent lawsuit challenging the way the state carries out the death penalty, and the difficulty of finding lethal injection drugs. (AP Photo/Ross D. Franklin, File)

PHOENIX — Arizona is poised to resume executions after a five-year hiatus brought on by an execution that critics said was botched, a subsequent lawsuit challenging the way the state carries out the death penalty, and the difficulty of finding lethal injection drugs, Attorney General Mark Brnovich said.

Brnovich said in a letter Friday to Gov. Doug Ducey that the now-resolved lawsuit removed legal barriers to carrying out executions. He also said a recent U.S. Justice Department opinion clears the way for states to import pentobarbital.

"Justice must be done for the victims of these heinous crimes and their families. Those who commit the ultimate crime deserve the ultimate punishment," Brnovich said in the letter. He asked the governor for help in obtaining pentobarbital.

It's unknown when the next execution will be scheduled. Fourteen of the 116 inmates on death row in Arizona have exhausted all appeals of their sentences.

PREVIOUSLY: He brutally murdered a grandmother and her granddaughter in Arizona. Now he's scheduled to die.

It's also unclear where the state will get the drugs. A judge ruled in September 2017 that the state does not have to reveal who provides its execution drugs.

"Regardless of where they go to get the drugs for executions, we expect the state will be transparent about the transactions and how it is spending taxpayer dollars," said Dale Baich, chief of the unit in the Federal Public Defender's Office in Arizona that represents inmates in death penalty appeals.

Brnovich's letter comes after the U.S. Justice Department's announcement Thursday that the federal government intends to carry out several executions in the coming months.

Executions in Arizona were put on hold after the July 2014 death of Joseph Wood, who was given 15 doses of a two-drug combination over two hours. His attorney had said the execution was botched.

RELATED: US government will execute inmates for first time since 2003

Wood, 55, was executed for the August 1989 shooting deaths of his estranged girlfriend, Debra Dietz, and her father, Eugene Dietz, at an automotive shop in Tucson.

In recent years, Arizona and other states have struggled to buy execution drugs after U.S. and European pharmaceutical companies began blocking the use of their products in lethal injections.

RELATED: VERIFY: Do executions have a future in Arizona?

Four years ago, the state tried to illegally import sodium thiopental, which had been used to carry out executions but was no longer manufactured by companies approved by the Food and Drug Administration.

The state never received the shipment because federal agents stopped it at the Phoenix airport and lost an administrative challenge to the seizure.

In his letter, Brnovich said a Justice Department opinion issued in May concluded the FDA lacks jurisdiction to regulate the importation of lethal injection drugs and thus clears the way for states to import pentobarbital.

Baich disputed that the opinion opened the door to the importation of the drug.

Brnovich said the Justice Department's announcement about the federal death penalty suggests it has obtained pentobarbital.

RELATED: Who are the women on death row in Arizona?