Phoenix sites being reviewed for Taiwanese company's semiconductor factory. Company makes chips for everything from iPhones to F-35s 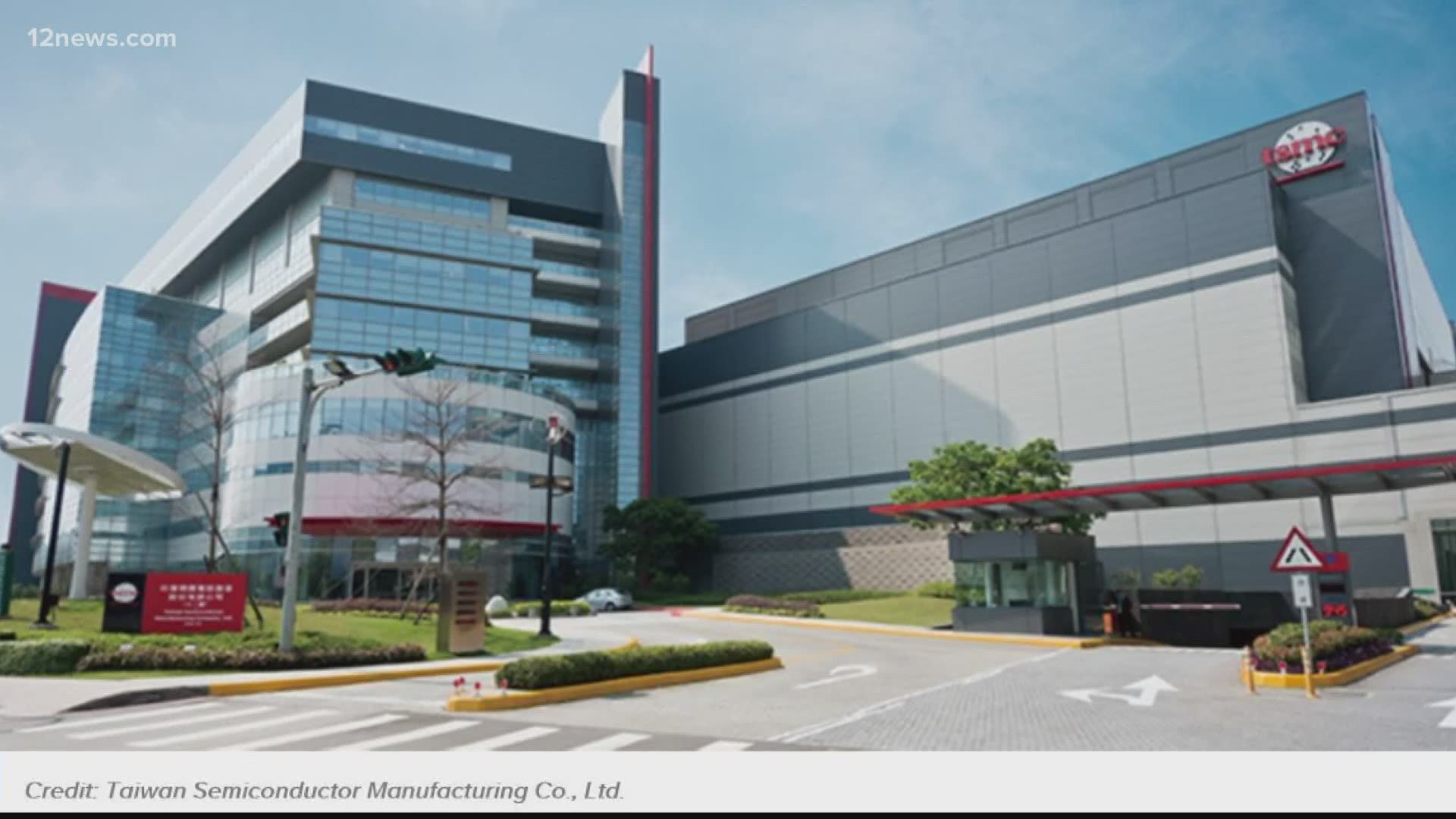 A Taiwanese company whose semiconductor chips are the brains in Apple iPhones and F-35 fighter jets is looking at Phoenix sites for a manufacturing plant, Gov. Doug Ducey announced Thursday evening.

The plant is expected to employ 1,600 people, with thousands more jobs created among suppliers, the governor said in a prepared statement.

"We’re incredibly proud that one of the world’s leading technology companies has chosen Arizona for this high-tech project, one with national and global significance,” Ducey said.

Several Phoenix sites for the factory are being evaluated.

Construction is expected to start next year, with semiconductor production targeted for 2024.

The company’s choice of Arizona reflects the semiconductor industry’s significant presence in the Phoenix area, with Intel Corp. as the longtime hub in Chandler.

The decision to open a second U.S. plant appears to be a result of the Trump Administration's pressure on chip manufacturers to build plants and create jobs in the U.S.

It also comes amid concerns spawned by the coronavirus pandemic about America's vulnerability to supply chains from overseas being cut off.

Building a chip plant is a very expensive undertaking.

In 2017, Intel announced its latest semiconductor fabrication plant - known as a “Fab” - in Chandler.

The cost was $7 billion, with a projected 3,200 manufacturing jobs.

TSMC projects spending $12 million on the plant over the next decade.

According to the Wall Street Journal, the Arizona plant would be a relatively small one for the company. TSMC said the plant would make 20,000 wafers a month; last year, the company that made more than 12 million wafers.

In a statement, TSMC indicated it was expecting some kind of incentives.

The company said it decided to build the new plant with the “mutual understanding and commitment to support from the U.S. federal government and the State of Arizona.”

The Trump Administration has offered lavish financial incentives to foreign companies that build in the U.S. It’s not clear yet what kind of incentives TSMC might receive from federal, state or local governments.

One of the project’s potential spinoffs is political: President Trump and Republican Sen. Martha McSally both face tough election battles in Arizona in the fall.

The announcement of an Asian manufacturer building a U.S. plant could highlight a success of Trump’s “America First” policy.

TSMC has one other U.S. plant, a facility in Washington state built in 1998. The factory makes chips that are based on a nearly obsolete standard.

Washington state, which is reliably Democratic, had tried to lure the new TSMC project there.

Landing the TSMC plant is "a major win for Arizona" as more companies look to move manufacturing from Asia to the U.S., according to an executive with a leading site-selection firm.

"Arizona now finds itself front and center in the reshoring discussion," John Boyd Jr., of the New Jersey-based The Boyd Co., said in an interview.

“One of the silver linings, if you will, of the COVID-19 crisis, is it really underscored the nation’s dependence upon our life sciences supply chain from China. We anticipate a new wave of life science industries coming back from Asia to the US. Arizona, given its positive business climate and right-to-work status, will be well-positioned to attract its fair share of that type of industry.”

TSMC's expectation of incentives might highlight the controversy surrounding the massive package that lured another Taiwan-based company, FoxConn, the world's largest contract manufacturer of consumer electronics.

Back in 2017, President Trump touted FoxConn’s plan to build an enormous plant in Wisconsin as a major victory.

FoxConn, a major Apple supplier, was offered a $4 billion incentive package, one of the largest ever between a company and a state.

The project has yet to produce any jobs. Plans for the plant have been dramatically downsized.

“TSMC can look at FoxConn deal," Boyd said. "It can take the temperature among U.S. lawmakers and realize that getting a package that size is a really difficult thing to do in this climate, especially given the softened U.S. economy because of COVID-19.”

Boyd, whose firm wasn't involved in the TSMC site selection, said an incentive package might include: