Students walked out of a forum with NAU's president Wednesday after she said she wasn't sure she supported the notion of a safe space. 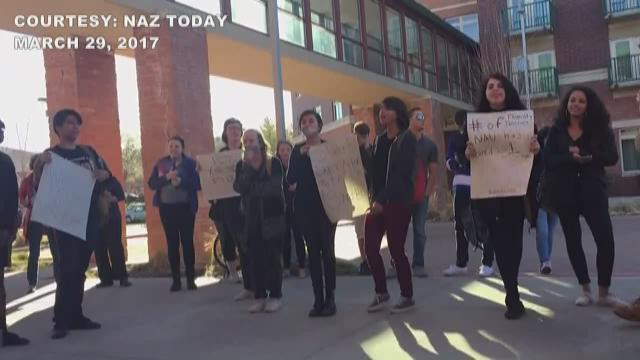 FLAGSTAFF, Ariz. – Organizers of a walkout and protest held Wednesday at Northern Arizona University said it was because the school’s president didn’t ensure the safety of all her students.

During a forum hosted by President Rita Cheng, NAU sophomore Breanna Kramer asked Cheng, “How can you promote safe spaces, if you don’t take action in situations of injustice, such as, last week, when we had the preacher on campus and he was promoting hate speech against marginalized students? As well as, not speaking out against racist incidents like blackface two months ago by student workers followed by no reform and no repercussions?”

Cheng replied, “As a university professor, I’m not sure I have any support at all for safe space. I think that you as a student have to develop the skills to be successful in this world and that we need to provide you with the opportunity for discourse and debate and dialogue and academic inquiry, and I’m not sure that that is correlated with the notion of safe space as I’ve seen that.”

“That’s what we’re doing and safe spaces are not about that. It’s about certain groups being targeted and nothing is being done about it,” said NAU senior Nina Wilson after walking out of the forum.

The coalition accused Cheng of only opening her mind to differences when it paid.

“That’s why we get the like gay campus because we’re a marketing technique, but she doesn’t care about our safety,” one NAU SAC organizer of five years said.

The NAU Student Action Coalition is composed of many student groups and various individuals who are being directly impacted by a range of issues highlighted at the forum on Wednesday. The NAU community invests a lot of time, money, and energy in this experience and, because of failed leadership, we are not getting a return on our investment. President Cheng's answers at the forum were insufficient and if she's not ready or willing to engage in these serious conversations and more importantly work towards solutions, then we do feel her resignation is necessary and would want a university President who works to provide the purpose of higher education, which is to enrich the lives of many people, students, faculty, staff and the larger Flagstaff community. We were guaranteed access, quality and excellence in our higher education student experiences and far too many students are experiencing the exact opposite.

12 News reached out to the president and her office with a request for an on-camera interview or statement. The assistant to the president for executive communications and media relations, Kimberly Ott, answered the following questions in an email:

Q: What does President Cheng think about the NAU SAC asking for her resignation if she doesn’t provide a safe space for all students?

A: NAU is safe. Creating segregated spaces for different groups on our campus only [leads] to misunderstanding, distrust and [reduces] the opportunity for discussion and engagement and education around diversity. Our classrooms and our campus is a place for engagement and respect – a place to learn from each other. NAU is committed to an atmosphere that is conducive to teaching and learning.

Q: Does she only bring up diversity and equality on campus when it opens up the school for grant and fund eligibility?

A: President Cheng has been addressing diversity and equality in her words and her actions since the day she arrived at NAU. Her leadership in advocating for our students and their success is reflected in the fact that our enrollment mirrors the diversity of our State.

A: One incident has been investigated and has been addressed through our student Code of Conduct. The second incident is still [being] reviewed by our Equity and Access office. Policies from NAU and the Arizona Board of Regents protect a climate of discussion, and ensure students education and the opportunity to explore and debate ideas. Policies are reviewed and modified as needed as a matter of university and ABOR practice.

Q: Is she willing to sit down with NAU SAC representatives (if she hasn’t already) to hear their concerns and see what she can do to address them?

A: Yes. The President is and has always been willing to meet with representatives of student groups. There were hundreds of people at Wednesday’s forum – faculty staff and students. The few dozen who left, missed the opportunity to hear the questions of others, including several similar to theirs, and the answers that followed.

NAU SAC organizers said they plan to hold more demonstrations in the near future in hopes of bringing about the changes they seek.