The Arizona-based group was eliminated during the qualifying rounds of the dance show's fourth season.

ARIZONA, USA — An Arizona-based Native American group represented their culture last week when they appeared on the NBC hit-show World of Dance.

The group, named Indigenous Enterprise, is the first Native American dance group the show has had on in the four years since it premiered.

"We were very grateful for the opportunity," the group's founding member, Kenneth Shirley, said. "Sometimes, you've got to hit the first wave, and that was us."

The dance collective started performing in 2015 at local community colleges to educate people on the traditions and culture of Native Americans. However, they soon became worldwide hits, recently becoming the first Native American group to perform at the Sydney Opera House in Australia.

"That was the first time in history that they've ever had Native Americans in that concert venue," Shirley said. "We've been traveling on all different platforms, from film to fashion." 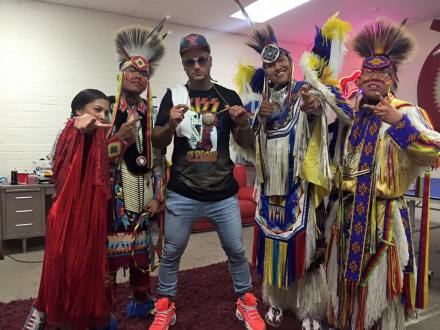 Our Team
Leadership Kenneth Shirley Diné Phoenix, Arizona Kenneth Shirley is the founder and CEO of Indigenous Ent. He recently graduated with his bachelors in arts from Arizona State University in 2018. He is a filmmaker collaborating with artists such as The Black Eyed Peas, Micky Free and the Sydney opera House.

Being "first" in many things has become something to be expected for Indigenous Enterprise. Many people in the group's audiences say that their performance is the first native dance that they have seen, the dancers said. Some even say that they thought Native Americans were all dead.

"When we go overseas, sometimes they look at us like dinosaurs," Shirley said. "Like, all they know is Pocahontas. In the 21st century, people still think we live in teepees. Being able to show that we are still here and to provide culture is just powerful beyond words."

Representing their culture is a difficulty Indigenous Enterprise is still struggling against. While they were the first Native American dance group to ever appear on World of Dance, they were disappointed to not make it past the first round.

"For me, as a judge, I've got to look at it as far as a competition," show judge Derek Hough said. "Is this going to be competitive against some other acts that we've seen? And, as much as I loved it, for me this is going to be a no."

Judge Ne-Yo also said that, while he loved the performance, he didn't think it's ready for the show.

"I would totally understand if we sucked," Shirley said. "If one of us fell or we weren't in sync. I could see them saying 'you guys messed up on your choreography, so we're not going to bring you forward.' But, they said 'you guys did amazing, that was great, it was beautiful, but it's a no'."

The focus of World of Dance is to bring dancers from cultures around the world together to compete on the same level, according to the show's website. While other genres of dance, such as ballet or hip-hop, are able to be critiqued on the show, it didn't seem like the judges would be comfortable critiquing a Native American dance, Shirley said.

"If you saw Jennifer Lopez saying 'hey, that footwork wasn't right' or 'you guys weren't in sync,' she would come off as disrespectful because she doesn't know anything about our culture," Shirley said. "I think that was her chance to say 'I don't want to get in trouble for disrespecting the culture and saying that you guys didn't dance good, so go home'."

The group strives to educate the most people on Native American culture as possible. But, it gets difficult when barriers of entry are in place all over, especially when people don't allow it to exist or compete on the same level as non-indigenous cultures.

You can catch World of Dance every Tuesday only on NBC.