Shining above the sky were bright lights in a V-shape – maybe a massive ship that was miles wide – right over Phoenix. 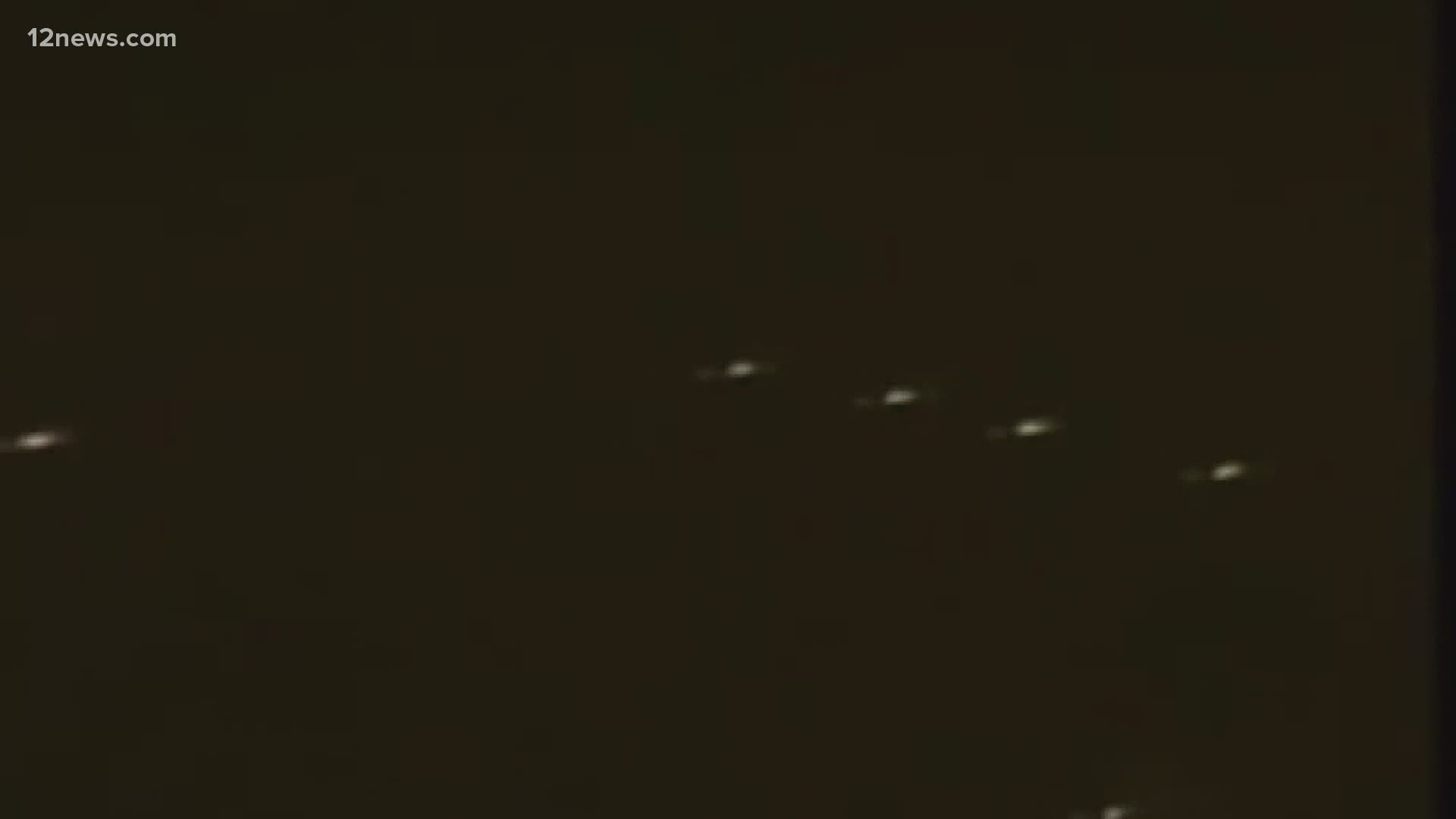 PHOENIX — A stunning sight across the Arizona sky delighted, and maybe frightened hundreds if not thousands of people on March 13, 1997.

Shining above the sky were bright lights in a V-shape – maybe a massive ship that was miles wide – right over Phoenix.

Fast forward 24 years, and we still don’t know what the Phoenix Lights were, but now a lot more people are taking them – and UFOs – seriously.

Dr. Lynne Kitei watched the Phoenix Lights arrive, and she’s one of the few people with photographs of them.

And for years she stayed quiet – afraid of being branded crazy.

“Now that the military and the government have actually come forward to say ‘yes, we are studying in the Pentagon,’” Kitei said.

In the last year and a half, there have been some massive bombshells in the UFO community. For starters, the US government says they’re real, and they were researching them.

Look no further than videos from the US Navy that were leaked, and the US military has since confirmed were real and unidentified.

“This is not a joke,” Kitei exclaimed. “This is real. Something, even though I don't know what they are. I just wanted to know who they are, who's driving these things”

Nick Pope led the British government’s version of The X-Files, and he’s investigated UFO sighting for the Ministry of Defense in the early 90s.

It’s something the U.S. government claimed for decades it didn’t do.

“The official position of the United States government was, we have not had a UFO program,” he explained. “Since the end of 1969 when Project bluebook was terminated, and nobody is interested in this, I choose my words carefully but perhaps we were not being told the entire picture.”

But in reality, a handful of military groups have been investigating UFO sightings since 20007 and may still be doing it today.

“I think people's perception of UFOs has changed fundamentally and this whole subject has come out of the fringe, and into the mainstream,” Pope said.

Like the Phoenix Lights, tons of regular people saw them, but most had no special training. But a private pilot also reported them to the FAA that night.

The pilot who reported the sighting was actor Kurt Russell.

“The tail number for that plane was Bonanza two tango Sierra and I was the pilot,” Russell said.

He stayed silent for years and only came forward on British TV in 2017.

“We’re maybe a half-mile out all of a sudden, one of those lights, and I and I didn't kind of like came out of my reverie and I said, I don't know what they are, I said. He said, ‘Are we okay here?’ and I said, ‘Yeah, I'm gonna call them,’ and I reported it.”

And the sightings have occurred as recently as February when an American Airlines pilot reported seeing something fly over his plane over New Mexico.

American Airlines confirmed the sighting and said the FBI is investigating.

“Some people can deal with this topic,” Kitei said. “Some people don't want it. And that's okay. Everyone in their own time.”

Because of all this, Kitei and other UFO believers say it’s time for more people to take it seriously.

They say something’s up there, and they want to know what it is.