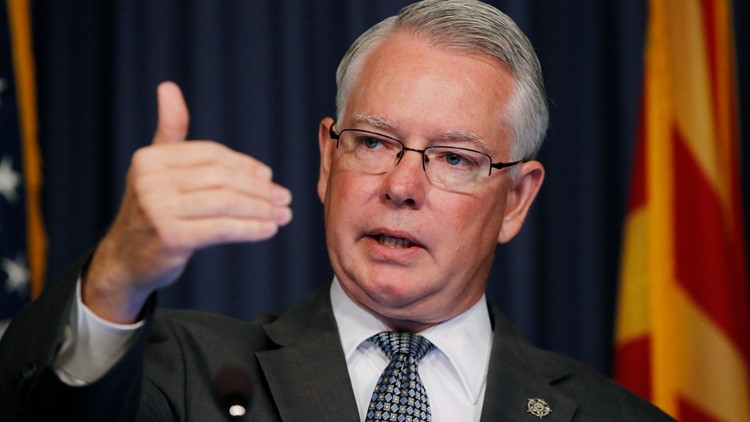 PHOENIX — Maricopa County Attorney Bill Montgomery's bid for a seat on the Arizona Supreme Court remains alive after a state panel on Friday included him among seven finalists sent to Gov. Doug Ducey.

He told the panel his life and career have given him a variety of experiences, from growing up in a rough neighborhood of Southern California to graduating from West Point, leading soldiers in the Army and eventually as a top prosecutor.

"The approach of a public official has to take into account the full scope of individuals they're seeking to serve and not just sit behind a desk and make decisions based solely on pieces of paper...but also be mindful of what the impact of that decision is on others," Montgomery said.

The American Civil Liberties Union protested at his office on Thursday demanding he withdraw from consideration, saying he's a barrier to criminal justice reforms. Montgomery's critics also point to misconduct allegations against a senior prosecutor in his office and say his years in elected office make it hard for him to be an impartial arbiter on the state's highest court. The next justice will replace retiring Chief Justice Scott Bales.

Montgomery's record "reflects persistent, open hostility to the principles of equality, liberty, justice and dignity under the law for LGBT people and their families, among others," wrote lawyers from Lambda Legal, a legal group supporting the rights of lesbian, gay, bisexual and transgender people.

Montgomery refused to help a same-sex couple with an adoption, and when challenged, moved to stop his attorneys from helping any couples with adoptions rather than help the same-sex individuals, the Lambda Legal lawyers wrote.

Montgomery's supporters say he has shown courage making difficult decisions knowing that they'll anger a segment of the community.

"Bill has a long and distinguished career in the public domain and has shown that he will defend the laws and the Constitution, whether it is popular or not," wrote Attorney General Mark Brnovich, a Republican.

The Commission on Appellate Court Appointments declined in March to make Montgomery a finalist for a prior vacancy. Since then, Ducey appointed several new members to the commission, which now has no Democratic members.

Republican Commissioner Larry Suciu of Yuma County said Montgomery lacked any substantial experience in appellate law and suggested he embellished his involvement in appellate matters on his application.

"I don't think the Supreme Court is somewhere you go for training," Suciu said.

Other commissioners rejected the contention of Montgomery's critics that his elected experience disqualifies him, noting a number of U.S. Supreme Court justices held elected offices before they were appointed.

"You see this pattern, it's not unusual," said Tracy Munsil, a Republican commissioner from Maricopa County.

The commission, created in an effort to insulate the judiciary from partisanship, eliminated two candidates and sent Ducey a list of four Republicans, two Democrats and one Libertarian to choose from.