A year after McCain's death from brain cancer, family members are fighting to shape how the world remembers the Vietnam War hero and veteran senator. 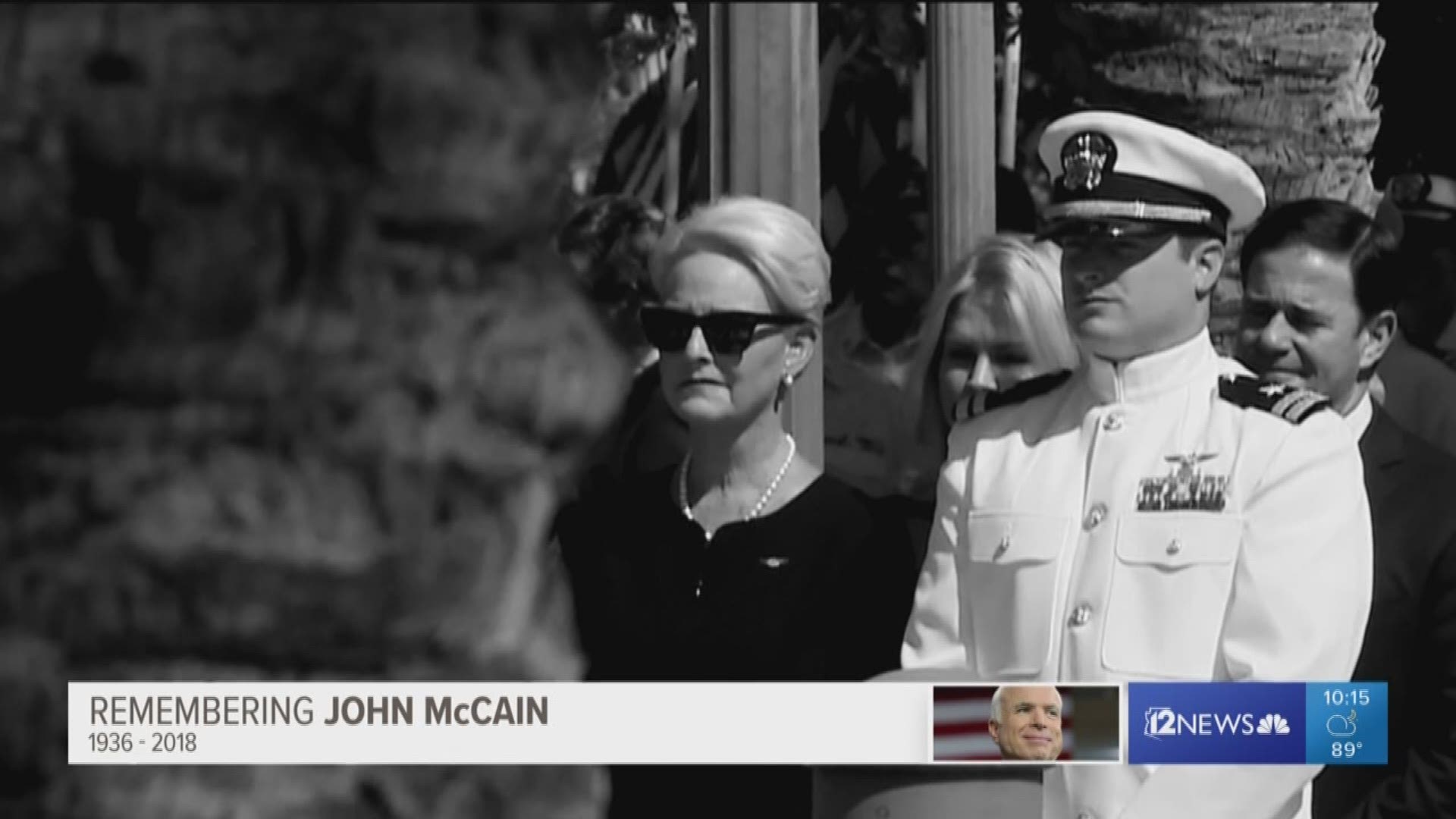 WASHINGTON (AP) — Cindy McCain stood on a knoll in Tempe, Arizona, last year and looked out over the Rio Salado.

The spot where she stood, on 26 acres, is where she and her ailing husband, Sen. John McCain, had discussed building a "gathering place" for his archives, hiking and perhaps candidate debates — but especially for listening.

"We had planned a library," the senator's widow said in a telephone interview this week. "But it will also be a focal point for gathering to talk about these issues to have honest and real discussions about them."

RELATED: Why a Latino Republican from Arizona says he gave up on the GOP

A year after McCain's death from brain cancer, the library is one way his family members are fighting to shape how the world remembers the Vietnam War hero and veteran senator and to prevent President Donald Trump from doing it for them. The counterprogramming also includes videos and its own Twitter hashtag, #ActsofCivility, in which the McCains ask Americans to perform and post affirmative acts of listening to one another and agreeing to disagree.

The campaign is a rejoinder to Trump's smash-mouth style and his one-man feud against the late senator. As a candidate, Trump derided McCain, a prisoner of war for five years during Vietnam, saying that he preferred heroes who weren't captured. Even now in campaign rallies, Trump complains about how McCain turned a thumb down in 2017 and sank the GOP's effort to overturn the Affordable Care Act.

The grudge continued. In May, the White House told the Navy to keep the USS John S. McCain out of sight to avoid offending the president during a trip to Japan. Trump said he knew nothing about moving the warship and blamed the move on a "well-meaning" official aware of the president's dislike for the late senator.

Cindy McCain last month attended the ship's recommissioning in Yokosuka, Japan, an event she said was scheduled before "the controversy."

Defining McCain's legacy poses challenges in the Trump era, especially for the family of a man who never became a president. Trump has the bully pulpit, a passionate Twitter following of tens of millions and a talent for branding opponents. History also will give him some say in the way McCain is remembered.

"I was never a fan of John McCain, and I never will be," Trump said in March.

A presidential spokesman did not respond to a request for comment on Tuesday.

The McCains and their allies have the senator's story, told by former Presidents Barack Obama and George W. Bush at his funeral and preserved already in papers being collected by Arizona State University, which donated the land for the library. They've also got plans and a determination to direct the storytelling.

"The only person that defines John McCain's legacy is John McCain," said his son Jack McCain.

John McCain, who wrote a book about the end of his life, planned his funeral and even wrote a post-mortem statement read by a longtime aide, showed his surviving friends and family how he wanted to be remembered and how he did not.

"John McCain did not define himself by any losses," said Sen. Mitt Romney, R-Utah, who commiserated with McCain after the two GOP presidential nominees lost to Obama in 2008 and 2012.

Like the library, McCain's legacy is still somewhat aspirational. Upcoming books and other materials are likely to flesh it out. So will The McCain Institute, a nonprofit aimed at leadership development, human rights and combating human trafficking.

"He's only been dead a year, and legacy is something that's built over a great deal of time," the senator's son said in an interview. "I personally hope that his legacy is defined by his civility."

In that year, McCain's peers especially have given thought to what sticks with them and what it means.

Retired Marine Gen. James L. Jones, who served in Vietnam while McCain was imprisoned and who worked under him and later with him, said McCain's reconciliation with Vietnam helped Jones forgive his enemies of war.

"He had more reason than I did to carry a burning hatred for his captors for the rest of his life," said Jones, who served in leadership positions under Republican and Democratic presidents while McCain was in the Senate. "When he essentially extended the hand of peace, that caused me to do the same thing. I got rid of my demons."

For now, the McCains say they are still grappling with his absence. Cindy McCain said she is focused on her family and on the impending birth of a grandson. But grief, she says, sometimes washes over her.

Jack McCain, a graduate of the U.S. Naval Academy, was in Afghanistan before and after his father's death and insulated from much of the aftermath. He's moved from active duty to the Navy Reserves and is home in Maryland now, with a 2-year-old son and his wife, Renee, trying to figure out what comes next.

"I'm attempting to find a way to reorder my life without the person who had been basically my role model, my leader, the person I turned to when I needed sound advice," he said.

Running for public office, he said, is not part of the plan.

As for legacy building in the Trump era, McCain's allies say it's a long game.

"When the president talks about John McCain, and the way he does, I think people just click off," Jones said. "They just turn him off."

Romney, who's had his own battles with the president, said McCain's public life is too long for one president to define.

"I don't think the family's going to worry too much what President Trump has to say about Senator McCain," he said Tuesday. "It's a 50-year-plus legacy that is not going to be changed or obstructed by virtue of some tweets."

Said Sen. Sheldon Whitehouse, D-R.I.: "I do think that in the long run what John stood for aligns so much better with our American values, and he will have the last laugh over Trumpism."