Two other southern Arizona residents were hurt by javelina last year; including another Oro Valley woman on March 25, and a Tucson resident on May 1. 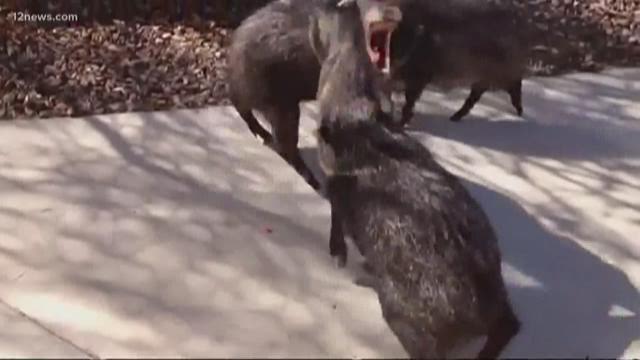 Arizona Game and Fish officials say another person has been injured by a javelina in Oro Valley. This marks the third incident in southern Arizona in less than a year.

The latest incident happened on Tuesday night at around 9:30 p.m., as a woman was walking her dog. She was reportedly knocked to the ground, as she attempted to avoid two javelina that were attacking her pets. According to a news release from AZGFD, the victim suffered a minor puncture wound to her left shoulder, and was treated and released from the hospital.

Two other southern Arizona residents were hurt by javelina last year; including another Oro Valley woman on March 25, and a Tucson resident on May 1.

Authorities say there are ways you can help reduce the possibility of injury, should you encounter javelina.

"Walking your dog at night is a recipe for a confrontation with javelina, so try to avoid doing so. If you see javelina while walking your dog, go in the opposite direction. Javelina can't tell the difference between a dog and a coyote, which prey on javelina, so they react instinctively to dogs," said Regional Supervisor Raul Vega of Game and Fish in Tucson. "The presence of dogs is the second leading cause of injuries to humans by javelina, which are rare but can be serious. The leading cause of such injuries is feeding javelina, which is illegal."