The pacu is a South American freshwater fish related to the piranha. 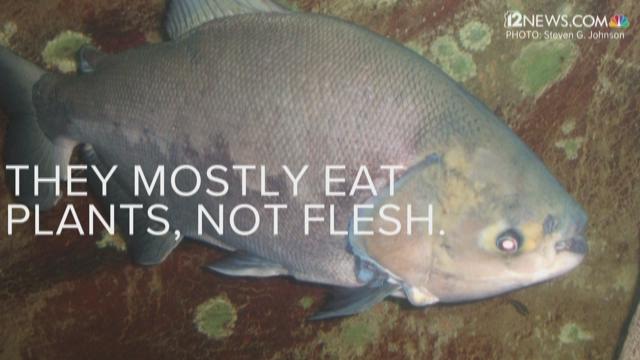 TUCSON, Ariz. - A Tucson fisherman got a creepy surprise when he was fishing for trout at Silverbell Lake this month.

According to the Arizona Daily Star, 49-year-old Jeff Evans caught a three-pound fish with human-like teeth he believed to be a piranha. He said it tried to bite him a few times.

The Arizona Game and Fish Department later confirmed it was actually a pacu fish.

Evans told the Daily Star he has fished for more than 20 years, and it is his second time catching a similar type of fish.

The pacu is a South American freshwater fish related to the piranha. The pacu’s square, straight teeth and mostly plant-based diet distinguish it from the piranha.

The Arizona Game and Fish Department said people sometimes illegally release tropical fish like suckermouth catfish, goldfish, pacu and even piranhas from fish tanks and ponds when they grow too big.

The invasive species carry diseases, prey on food important to sport fish and may create fear and panic when found, according to AZGFD.

As an invasive species, pacu are considered restricted wildlife, meaning you need a special license to own one.