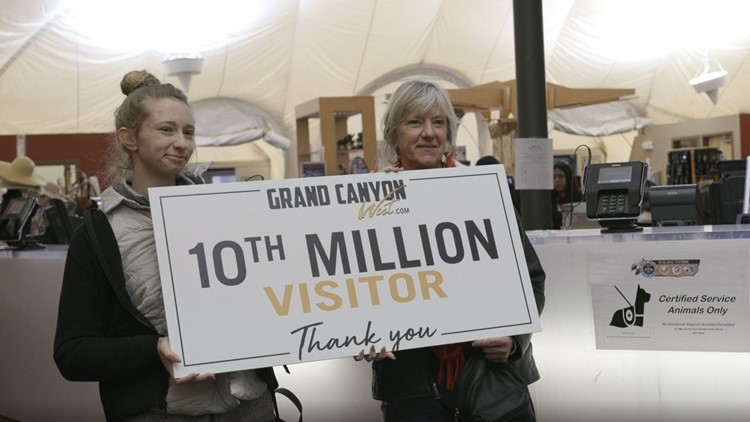 Photo by: Courtesy of David Leibowitz
Denise Hayes and Ryan Flanigan, the 10 millionth visitors to the Grand Canyon Skywalk.

Grand Canyon Skywalk recently welcomed its 10 millionth visitor since the tourism attraction first opened more than a decade ago.

According to a press release, Denise Hayes and Ryan Flanigan, a mother and daughter visiting from Kansas City, Missouri, were the attraction's milestone visitors.

Hayes and Flanigan were treated to a tour of the Skywalk, a helicopter tour of the West Rim and a pontoon boat adventure along the Colorado River.

RELATED: Here's how you can get married at Arizona's 'grandest' wedding venue

“The 10 million guests who have walked on Skywalk have helped us created hundreds of jobs and an entire economy," said Colin McBeath, the CEO of Grand Canyon Resort Corporation, which operates Grand Canyon West.

"It’s a tourism experience that respects Hualapai culture and the spiritual and natural gifts of the Canyon while giving tourists from all over the globe an up close look at one of the most awe-inspiring views known to man.”

RELATED: New highway signs to welcome travelers to Arizona in 2020