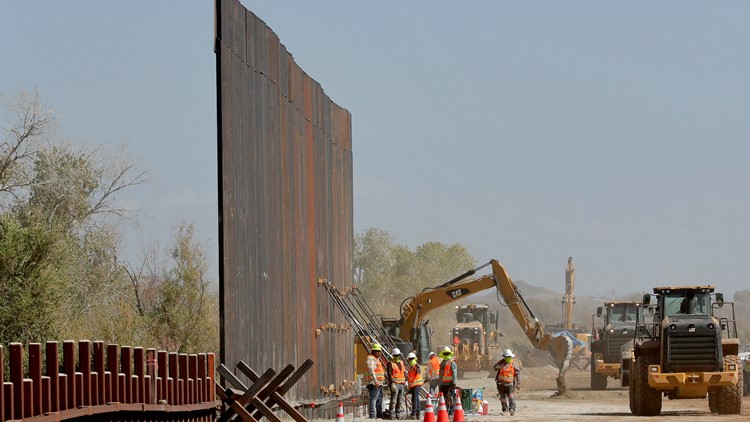 Photo by: AP
Government contractors erect a section of Pentagon-funded border wall along the Colorado River, Tuesday, Sept. 10, 2019 in Yuma, Ariz. The 30-foot high wall replaces a five-mile section of Normandy barrier and post-n-beam fencing, shown at left, along the the International border that separates Mexico and the United States. Construction began as federal officials revealed a list of Defense Department projects to be cut to pay for President Donald Trump's wall. (AP Photo/Matt York)

PHOENIX (AP) — The Department of Interior says it is transferring 560 acres of federal land to the U.S. Army to speed up construction on 70 miles of border wall in West Texas, California and Arizona.

This marks the first time the government has transferred land on an emergency basis to build border barriers.

Acting Assistant Secretary for Land and Minerals Management Casey Hammond said Wednesday that "extraordinary measures must be taken to preserve values that would otherwise be lost" at the southern border.

The announcement comes as President Donald Trump visited a newly completed section of the border wall in California. Trump's signature campaign promise was to build a wall between Mexico and the U.S.

He promised Mexico would pay for it, but he is instead using billions in Defense Department money.

RELATED: 450 miles of border wall by next year? In Arizona, it starts