Frozen embryo bill would dissolve prior agreements among couples

Couples who freeze their embryos typically agree to sign a contract that declares, in the case of a breakup, who gets ownership of the embryos and what should happen to them. A bill that has passed the AZ State Senate and is waiting for a final vote in the House would make those contracts unenforceable. 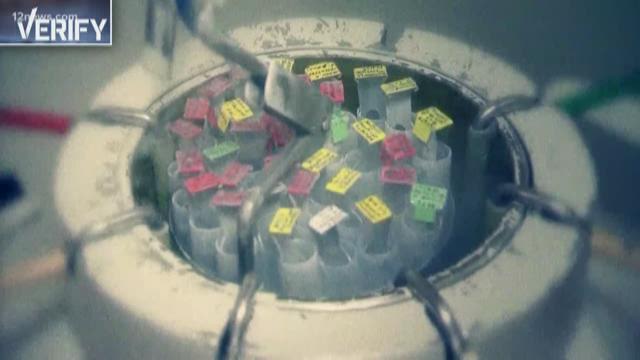 But love is often not so predictable.

It's why couples who freeze their embryos typically agree to sign a contract that declares, in the case of a breakup, who gets ownership of frozen embryos and what should happen to them.

A bill that has passed the Arizona State Senate and is waiting for a final vote in the House would make those contracts unenforceable.

According to AZ Senate Bill 1393, during ownership disputes over frozen embryos, the state court would side with the ex-spouse who wants the embryos for the purpose of having children.

In a scenario where both spouses are biologically related to the embryos and both want the embryos for the purpose of having children, the court must award in a way that provides "the best chance for the embryos to develop to birth." A provision would allow the other spouse to not be liable for child support or related expenses.

If only one of the spouses is biologically related to the embryos, the court would automatically award the embryos to that person.

If passed and signed by the governor, the law would likely be challenged in court.

Opponents argue the law would retroactively break contracts between couples, force an ex-spouse to become a biological parent against their wishes and create confusion among states in the event a spouse moves.

The group RESOLVE: The National Infertility Association sent a letter to the House last month that calls the bill “a new application of ‘embryo personhood’ legislation.”

“The bill inserts the AZ legislature into the extremely personal decision about how a couple builds their family,” the letter states. “Its effect is to take away individuals’ rights to determine whether or not they have children – and replace it with a government-mandated decision.”

The anti-abortion group, Center for Arizona Policy, is lobbying for the legislation.

“This bill provides much needed direction to the courts as they face these types of disputes,” says a written statement from the organization. “This bill balances the interests of the spouses by removing any right, obligation, or interest between the spouse that no longer wants to be a parent and any resulting child.”

The Center for Arizona Policy is fighting on behalf of an Arizona woman who ended up on the wrong side of a legal decision about the fate of her frozen embryos.

She wants to use the embryos for a potential future pregnancy, against the wishes of her ex-husband. The judge ruled in the case that according to a contract signed by the couple, the embryos should be donated.