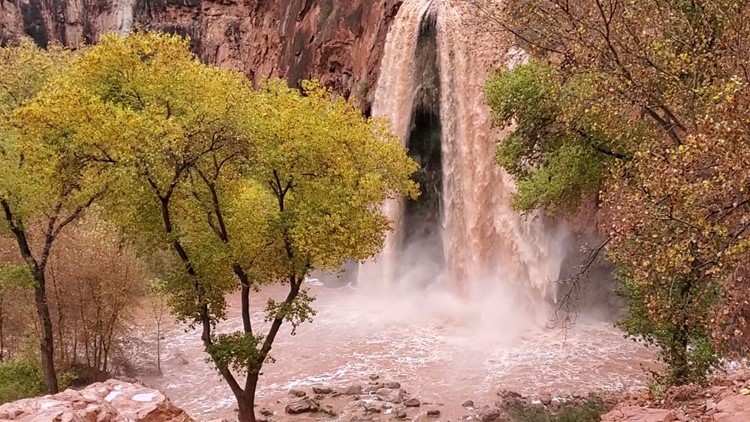 Photo by: AP
This Nov. 29, 2019, photo, shows a normally blue-green waterfall in Supai, Arizona, that turned chocolate brown after flooding. A popular tourist spot deep in a gorge off the Grand Canyon was flooded over the holiday, sending tourists scrambling to higher ground. The flood happened just days before the Havasupai Tribe shuts down its reservation to tourists for the season. No one was injured but some tourists woke up drenched and some lost camping gear. (Mandy Augustin via AP)

FLAGSTAFF, Ariz. (AP) — A popular tourist spot deep in a gorge off the Grand Canyon known for its blue-green waterfalls will make repairs after heavy flooding over the Thanksgiving break sent tourists scrambling to higher ground.

No one was injured in the flooding on the Havasupai reservation, and the water receded within hours. The extent of the damage is unknown. The tribe soon plans to send crews to survey the 10-mile trail and the campground, which closed for the season this week.

The area is prone to flooding and its iconic waterfalls turn chocolate brown during heavy rainfall. About 170 people were at the campground when water rushed through early Friday, raising the creek that flows through it by about 1.5 feet, tourists said.

A wintry storm moving east from California brought snow and rain to Arizona, even highly unusual tornado warnings to Phoenix. Two children died, and one is missing after floodwaters swept away a vehicle in central Arizona over the weekend.

On the Havasupai reservation, Mandy Augustin and her husband were asleep in a tent when the sound of the rain woke up her brother, who reached under his hammock and felt water.

They and her sister-in-law pulled a tarp off a picnic table and covered themselves, hunkering down for a few hours and watching the flow in the glow of headlamps. They used a rock to gauge whether the water was rising and picked out a tree to climb if needed, she said.

In this Nov. 29, 2019, photo, an unidentified man is seen crossing a flooded campground in Supai, Arizona. A popular tourist spot deep in a gorge off the Grand Canyon was flooded over the holiday, sending tourists scrambling to higher ground. The flood happened just days before the Havasupai Tribe shuts down its reservation to tourists for the season. No one was injured but some tourists woke up drenched and some lost camping gear. (Mandy Augustin via AP)
AP

Augustin, 30, of Marshfield, Wisconsin, said they saw groups of campers surrounded by water, even one tent that was floating with mud rushing over the sides as people slept inside. Campers and tribal members worked to warn people and get them to higher ground.

“Definitely people rallied together and helped each other,” Augustin said. “It was really nice to see people doing that.”

Once the sun came out, Augustin’s group decided to hike out, although the tribe encouraged people not to because of snow and ice on the trail. The area can be reached only by foot, mule or helicopter.

About 35 people stayed in community buildings in the tribal village of Supai, which had limited power, Havasupai Vice Chairman Matthew Putesoy Sr. said. About 70 tourists remained at the campground Monday.

The tribe plans to close its tourist operations this week until February, when the coveted permits for the campground go on sale again.

Augustin said her brother and sister-in-law both lost a boot in the water and wrapped other footwear in plastic bags for the hike out.

“It was really unique having seen the turquoise-blue and then the brown falls in a matter of hours,” Augustin said. “It’s just an absolute reminder of the respect we have to have for nature — and water in particular. It’s just a force.”