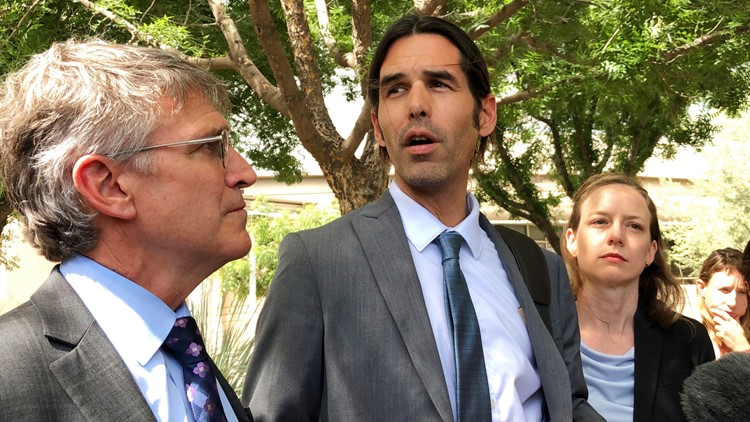 Photo by: AP
FILE - In this June 11, 2019, file photo, Scott Warren, center, speaks outside federal court, in Tucson, Ariz., after a mistrial was declared in the federal case against him. Warren is scheduled to testify Tuesday, Nov. 19, 2019, in the second criminal case against his actions as a member of a humanitarian aid group. Prosecutors say Warren was arrested in early 2018 after harboring two men who sneaked across the U.S.-Mexico border. (AP Photo/Astrid Galvan, File)

TUCSON, Ariz. — A federal judge in Tucson has dropped the final charge against a humanitarian volunteer who was arrested while trying to help migrants in the Arizona desert.

Scott Warren was scheduled to be sentenced Thursday for a misdemeanor conviction of driving in a wilderness area.

They didn’t immediately say why they asked for the case to be dismissed.

Warren, 37, was acquitted in November of felony charges of harboring two Central American migrants who spent several days at an aid station in Ajo.