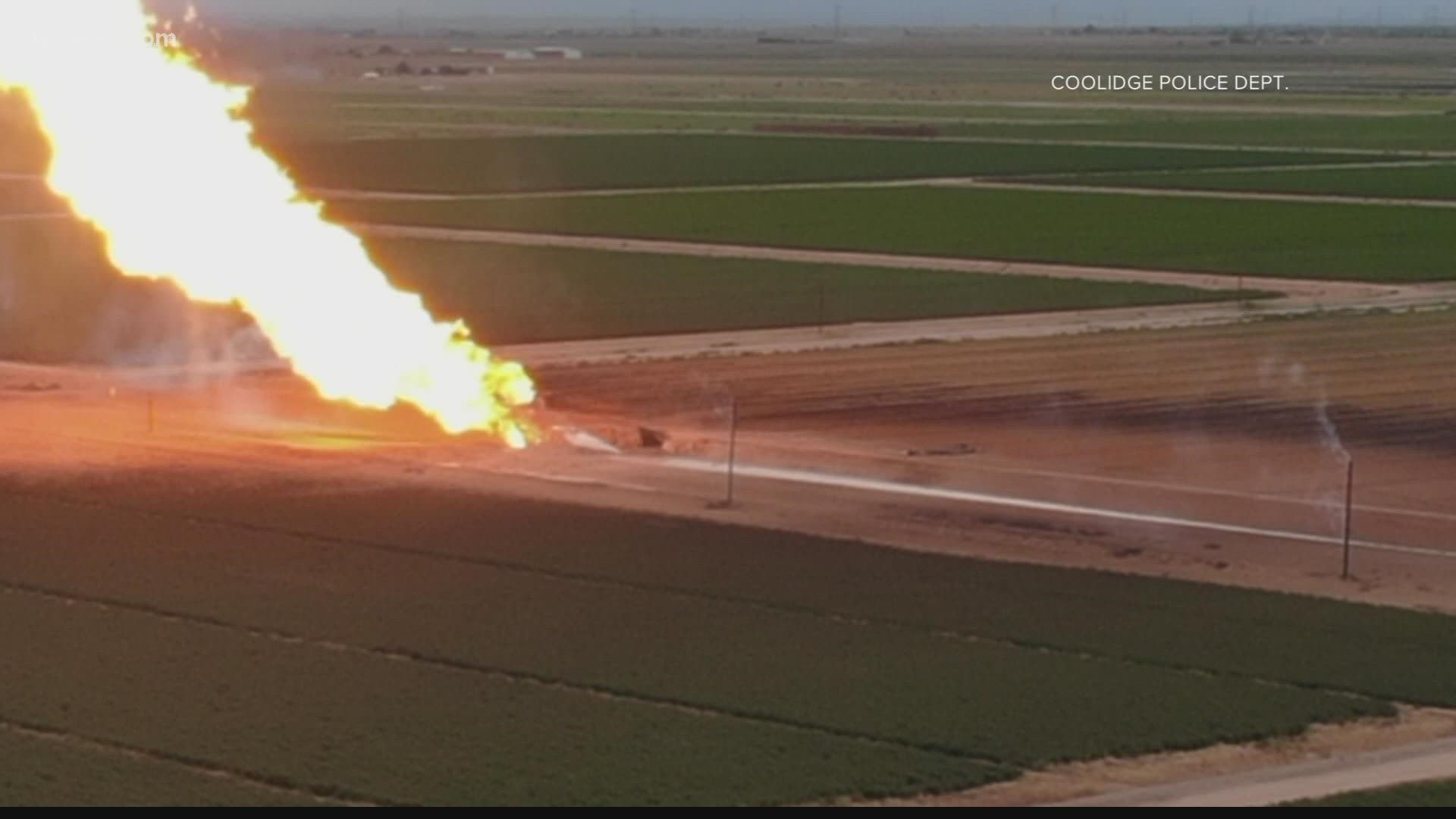 COOLIDGE, Ariz. — Rosalina and Luis Álvarez lived on the outskirts of Coolidge in a rural farmhouse for more than 15 years.

They, along with their three children, worked the land, a job they did in their native town of Sinaloa, Mexico before migrating to the U.S.

Their home is near SR 87 and E. Randolph Road, surrounded by farming crops, but underneath the soil there is a Kinder Morgan major gas line.

On Sunday shortly after 5:30 a.m., about 120 yards from the Álvarez’s home a gas explosion erupted, sending furious flames in all directions.

The home with more than 15 years of memories, was left in ashes, completely destroyed.

Luis Álvarez and his 14-year-old daughter Valeria Alvarez died in the fire. Their bodies were found more than two hours later after first responders extinguished the flames, officials said.

A Pinal County Sheriff’s Office deputy found Rosalina Álvarez walking on a dirt road with half of her body burnt. Authorities said she escaped the burning home through a window.

Guzmán met the Álvarez after they were attacked by two inmates who escaped a Florence prison in January—David Harmon and John Charpiot.

The inmates entered the home and assaulted Rosalina Álvarez until her husband came to her aid.

“They didn’t have a chance, it was an immediate explosion,” Guzmán said. “They lost everything, their home was left to nothing, you can’t even see the foundation of the home, it’s like if they dropped a bomb.”

Drone images from the Coolidge Police Department show the force of the flames, where nearby crops and utility poles were left charred.

Fire officials said the Álvarez home was not powered by the gas company.

The National Transportation Safety Board and the Department of Transportation arrived on scene Monday afternoon. They will be taking over the investigation and are expected to be there for a week.

As far as the explosion happening to the same couple that had the run-in with the escaped inmates, authorities said “we have no information indicating the past situation and this [recent] incident are related.”

Guzmán said his non-profit was helping the Álvarez with therapy after January’s incident, now with the loss of family members and one severely burned “they need all the prayers they can get,” he said.

The family has set up this GoFundMe account to help with the funeral services and medical bills.

“They didn’t have a chance, it was an immediate explosion,” Guzmán said. “They were united, a Christian family, a family that loved God, a family that wished to keep working and keep living.”