Car passengers would have to carry ID under new bill

You could go to jail for four months if you get caught without an ID as a passenger in a car if a new law proposal passes. 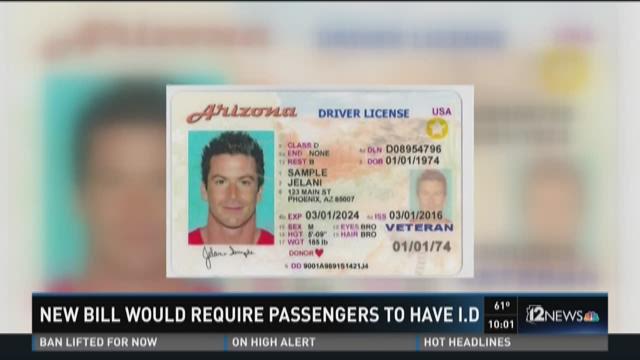 PHOENIX - You could go to jail for four months if you get caught without an ID as a passenger in a car if a new law proposal passes.

Rep. Anthony Kern (R-Dist. 20) introduced HB 2305 this week. It's not a new law, rather the potential revival of one.

A judge's ruling from a court case back in 2002 struck down the law forcing passengers to provide evidence of the person's identity, calling it too vague to enforce.

Current law only requires the driver of a vehicle to carry a drivers license, which serves as evidence of identity.

If this bill passes, a passenger would also be required to have evidence of identity. Failure to do so would be a class 2 misdemeanor, which allows for up to four months in jail by current state law.

You can view the entire bill proposal here through the Arizona Legislature web site.

An officer is only allowed to request an ID if there is reasonable suspicion of a crime or infraction to stop the driver of the vehicle.

"Police officers need to know who they are talking to, and we wanted to clarify it in statute for passengers also," said Kern, referring to the previous ruling which resulted in the dropping of possession of drug charges for a suspect who was arrested as a passenger for not having a valid ID and was not wearing a seatbelt.

How this may affect minors was not immediately clear. The text of HB 2305 does not directly address this detail.

Steve Kilar, spokesperson with the American Civil Liberties Union of Arizona, said the proposal would ascribe a harsh punishment for a minor violation.

"This proposal takes us one step closer to a society in which we're required to carry identification whenever we leave our homes," he said. "Furthermore, it needlessly piles criminal penalties onto civil violations, which would lead to huge fines and fees for otherwise minor violations. We don't need people branded criminals simply because they failed to carry—or do not have—an ID card."