The statement from Stephanie Holford, read by her attorney Tom Ryan on Thursday at a Capitol news conference, marks her first comment since 12 News reported Tuesday that she had texted a topless selfie to Montenegro and they had engaged in flirtatious banter last year while he was in the Senate. 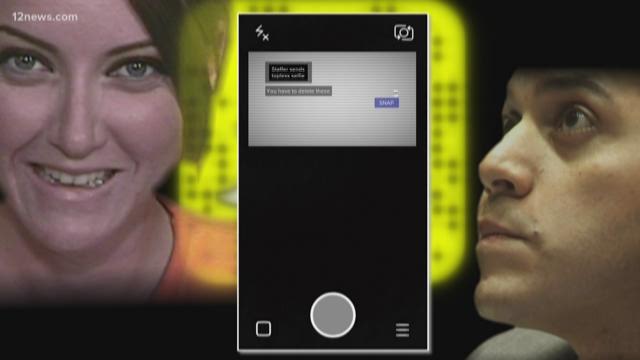 The statement from Stephanie Holford, read by her attorney Tom Ryan on Thursday at a Capitol news conference, marks her first comment since 12 News reported Tuesday that she had texted a topless selfie to Montenegro and they had engaged in flirtatious banter last year while he was in the Senate.

"Over the months we began to flirt. I felt comfortable enough with the relationship that I began to send pictures of myself in various states of undress. Senator Montenegro asked me to send them on Snapchat instead. We engaged in sexual conversation about these pictures. These were detailed and intimate. Because they were sent through Snapchat I do not have copies of them."

Ryan provided a CD containing all of their text messages, going back to February 2017, and largely ending by last December.

Montenegro is a married man and a minister whose campaign emphasizes his "virtue, honor and integrity."

He has provided three comments on the allegations since the first report Tuesday:

-In an online story Thursday morning, Montenegro admitted he exchanged text messages for months with Holford, but said he did "not have inappropriate relationships with that woman." He also claimed he alerted his wife after the topless selfie appeared on his phone.

Based on the chronology of the texting, that selfie would have been the last one she sent to Montenegro.

Holford alleged that an ex-boyfriend was the source of the topless selfie and other text messages reviewed by the media.

"I was stunned to find that an ex-boyfriend ... snuck onto my computer and stole my private information and began to shop it around to the media. I am considering what legal actions I may have for his involvement in this matter," she said in her statement.

She was hired in January 2017 after working as a Senate intern.

Holford, who is 31, served a 7 1/2 year prison term for aggravated assault in connection with a drunken-driving accident that injured three other people. She was freed in August 2015.

Franks, who was ensnared in a sexual harassment scandal, has endorsed Montenegro, a former Franks staff member.

Public and private polling for the Republican primary next Tuesday shows Montenegro is among the leaders in the 12-person field.

About 70 percent of the ballots have already been cast by mail.

The winner of the GOP primary will be a heavy favorite to win the special election in April.