Jason Derek Brown is accused of shooting the guard of an armored car five times in the head and making off with $56,000 in 2004. He hasn't been seen since. 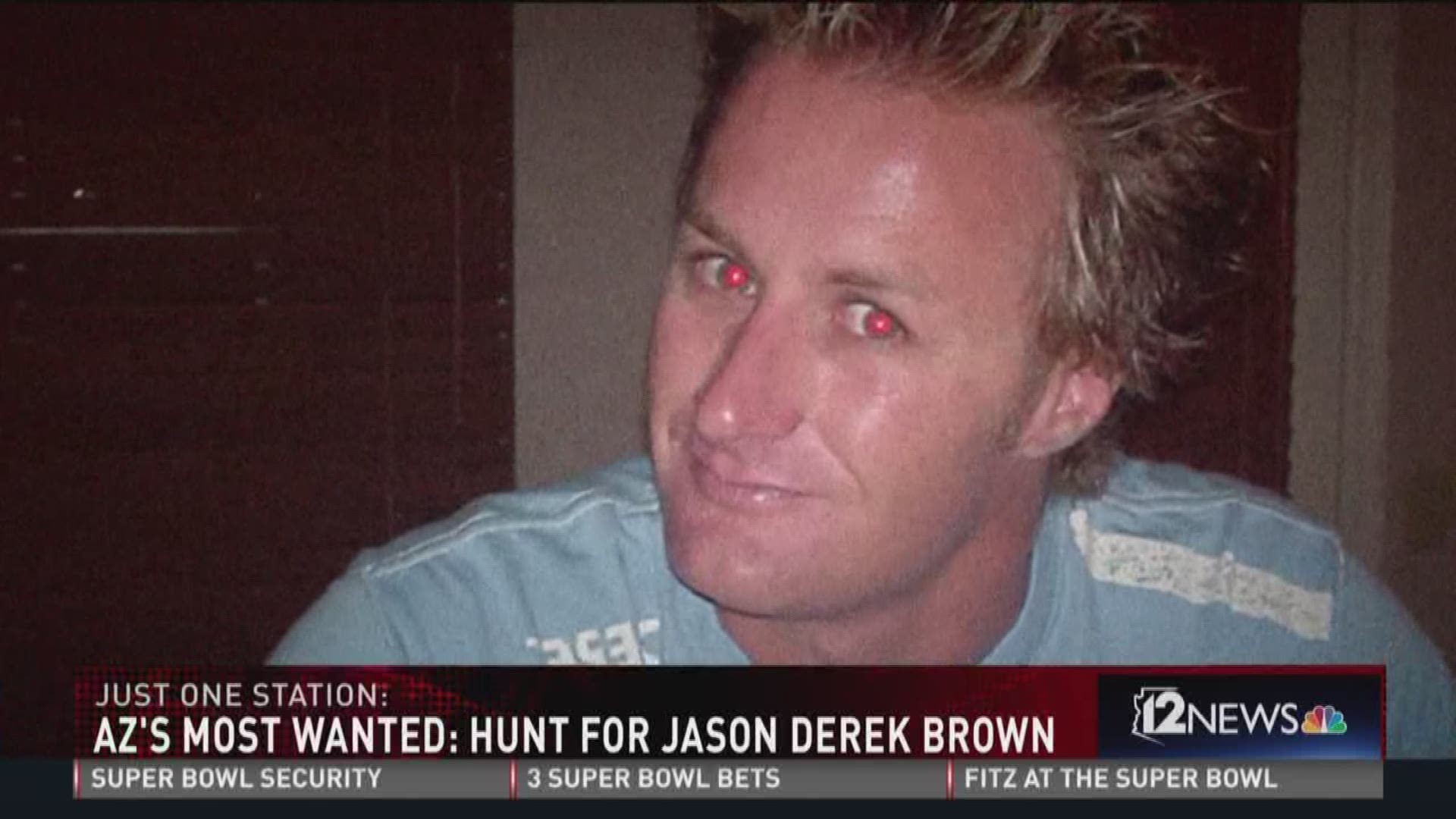 This is the fifth in a multi-part series on Arizona's Most Wanted.

Future installments will air on 12 News at 10 on Friday nights and be posted at 12News.com/MostWanted.

Description: White male, 5’10” with a medium build and green eyes. At the time of his disappearance he weighed 170 to 180 pounds.

The FBI and Phoenix police say Brown murdered Dunbar armored car guard Keith Palomares after he collected the box office receipts from the AMC Theaters in Ahwatukee on Nov. 29, 2004. FBI Supervisory Special Agent Lance Leising says Brown fired six rounds from a .45 caliber semiautomatic, five bullets into Palomares’ head. The FBI says Brown got away with $56,000 in the money bag. He took off on a mountain bike from the side alley of the movie theater. The bike was later recovered and was dusted for prints. The FBI says the prints matched that of Jason Derek Brown, who had previous arrests. Leising was among the first to respond to the scene that deadly day.

“When we responded to that 911 call, you kind of have an idea in your head of what the criminal’s going to be like, maybe his previous history. When you respond to a crime of this magnitude you expect that the suspect is going to have a lengthy criminal history," Leising said.

"This isn’t his first time -- not his first rodeo -- he’s going to have done this before. Maybe progressed from small-time crimes to this homicide robbery he committed. Wasn’t like that for Jason. Jason did have a lot of previous crimes, wasn’t arrested for them all, but most of them were con- or fraud-related. So, that’s what his life was. And he graduated right to this robbery homicide, I believe, for greed.

"He thought this was going to be the big payday, he thought this was going to be millions of dollars. It was not -- and that’s why he went to this. And what is Jason like? What do I believe him to be? Greedy is a good example. Vain might be another good word to explain him. Put himself in front of everyone else. That’s why he chose to end somebody’s life for money. I mean, it’s a ridiculous thing to end somebody’s life for."

When asked if he thinks Brown may have committed suicide, Leising said, “It’s a possibility. There are some family members that will -- and friends -- that say that’s what they think happened. I don’t know why. He fled for a while. He planned the flight, I believe also. He was ready for this. He knew he could run at a moment’s notice, which is what he did. I don’t think planning a suicide is something Jason would do. I’m not a psychologist. I don’t get into the minds all that much, but I think if you like yourself that much, suicide’s probably not at the top of your list of things you want to do.”

If Brown is still alive, Leising says there are a lot of ways he could keep running.

“He was a conman, a fraud. He, as most conmen are,(was) very good at talking to people. I mean, he could, sell ice to an Eskimo, right? He could really get people to believe what he has to say. He’s easily still using that ability. Likely, he’s befriended individuals, probably multiple along the years.”

Or Special Agent Leising says, he’s “mooching like he did here off of friends and family members, potentially couch surfing, but probably he’s set himself up somewhere that is comfortable for him, where he wants to be, and he’s latched into something. Usually a lot of times there will be people who use what they know. Jason has a varied background. He almost has a master’s in international business. So he understands the business route. He speaks fluent French. He understands the LDS church. He was a member of the LDS church and he grew up in that community, so he can speak that language and he can assimilate into that community pretty easily. and that’s worldwide. So he could easily be in a community such as that, anywhere in the world.”

Did Jason Derek Brown alter his appearance? Leising has some insight about that possibility.

“He discussed plastic surgery. I mean he’s discussed a lot of things to change his look. It’s difficult for somebody to change their look dramatically. But if Jason is truly trying to hide from us, he doesn’t want to look like all the pictures out there make him appear to be. He’s aged. I mean our pictures are older. They’re from the 2004 time frame, so there’s definitely some age there you’ll see. We have to age-progress photos out there to take a good educated guess as to what he may look like nowadays.

"So if anybody’s looking at the photos of Jason, you’ve got to understand that was 13 years ago. So he will have changed. There are certain things that don’t change. I mean I tell witnesses all the time, ‘Look at the eyes. Look at the bone structure. Look at ears. Look at certain aspects like that. It’s not just the physical appearance, I don’t think that will catch him.' I think Jason will have some, you know his vanity, his desire to be kind of the life of the party, his desire to be a friend. Yet being very cagey when it comes to his history, his background, his employment, which he has been here.

"I mean, he was living with a friend here and set up a home office in his friend’s house. He was staying with him for a while. Well, the friend eventually went to look at the office, because he wasn’t sure what Jason had done every day. It didn’t really appear that he was working, and he was asking questions about his day, and Jason was often very vague about what he did. So his friend went to look at the home office he set up and none of the -- the computer wasn’t plugged in wasn’t attached to anything. The printer wasn’t attached to anything. It was just a façade. And that’s Jason’s life. And I’m sure he’s living in a façade right now too.”

For Special Agent Leising, it’s a case that’s always on his mind. He says he thinks about it every day.

“I’ve talked with Keith’s family as well. Some of his family members more than others."

When asked what he’d like to tell them, Leising said, “I’d like to tell them that we’re never going to stop. I know he’s on the FBI’s top 10 list. And for law enforcement here in the United States, it doesn’t get more serious than that. When we put somebody on the top 10 list, we don’t take them off until we confirm that they’re dead, or we catch them. So we’re going to keep looking. We’re not going to stop. We’re going to keep going. We’ll cover every lead that comes in, and hopefully we’ll catch him someday and try to bring justice. I mean, this is more than about Jason. This is about Keith. This is about justice.”

Jason Derek Brown is fluent in French and FBI Supervisory Special Agent Lance Leising says he has a Master’s Degree in International Business, was a member of The Church of Jesus Christ of Latter-Day Saints in Los Angeles and completed his Mormon mission in France. Leising says Brown is cunning and extremely dangerous.