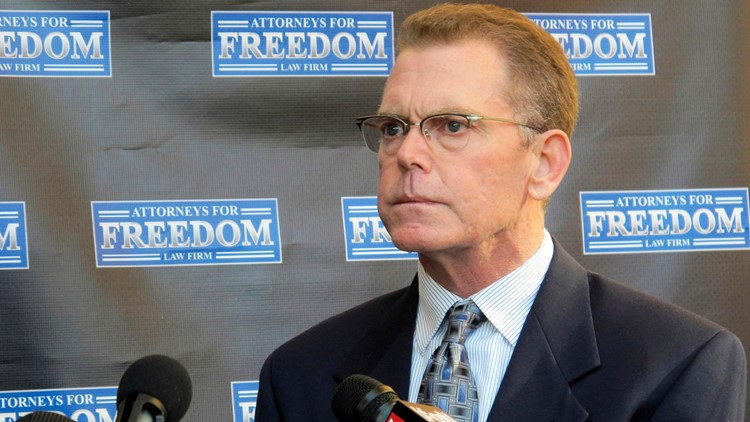 Photo by: AP
FILE - In this Feb. 2, 2018 file photo, Douglas Haig takes questions from reporters at a news conference in Chandler, Ariz. Federal prosecutors say a jury, not a judge, should hear the Las Vegas trial of an Arizona man facing a federal ammunition-manufacturing charge after selling bullets to the gunman who staged the deadliest mass shooting in modern U.S. history. A court filing on Tuesday, June 25, 2019 leaves it to a judge to decide. Haig's lawyers asked for a bench trial, arguing that jurors can't fairly hear evidence in a city where 58 people died and more than 850 were injured in October 2017. (AP Photo/Brian Skoloff, File)

The Mesa man who sold ammunition to the Las Vegas shooter pleaded guilty to engaging in the business of manufacturing ammunition without a license Tuesday afternoon.

Douglas Haig, 56, pleaded guilty at a hearing Tuesday in Las Vegas. He is scheduled to be sentenced on February 19, 2020. He faces a maximum of five years in prison and a $250,000 fine, according to officials.

The aerospace engineer from Mesa, Arizona, pleaded not guilty and remained free without posting bond following his indictment in August 2018 on a manufacturing ammunition without a license charge. He changed his plea Tuesday.  He has been prohibited from possessing guns and ammunition.

Authorities said Haig’s fingerprints were found on unfired tracer and armor-piercing bullets in the high-rise hotel suite from which shooter Stephen Paddock rained gunfire into an open-air concert crowd before killing himself.

Ammunition in the room also bore tool marks consistent with Haig's reloading equipment, prosecutors said, and Haig’s address was on a box that police found near Paddock’s body.

Haig said after his name became public that he didn't notice anything suspicious when he sold hundreds of rounds of ammunition to Paddock.

Haig's attorney argued that as the only person to face a criminal charge following the shooting, Haig could not get a fair trial before a jury drawn from the trauma-scarred Las Vegas community.

But the defense attorney lost bids to move the trial to another venue, to draw jurors from throughout Nevada, or to have the case heard by the judge instead of a jury.